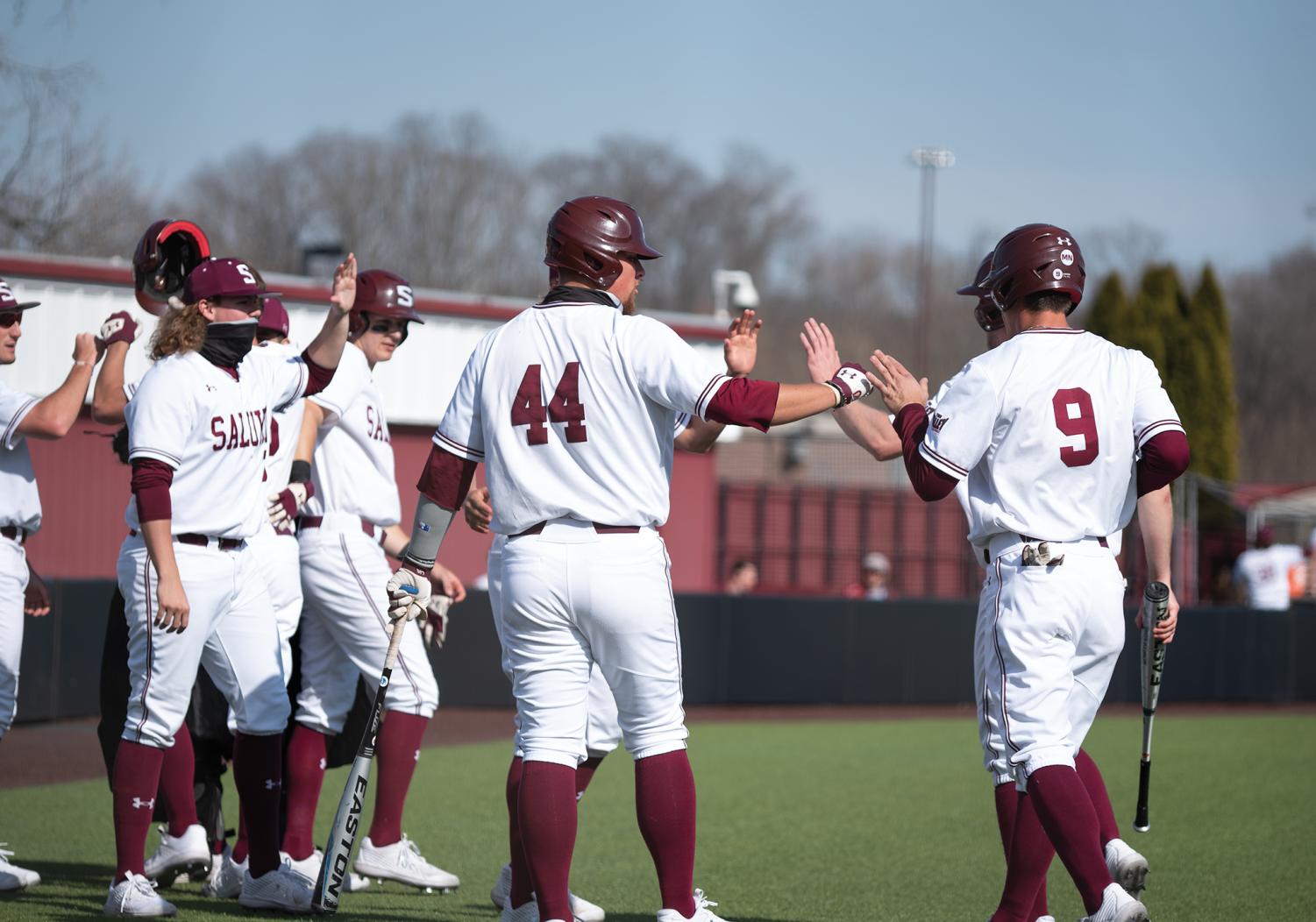 Philip Archer (44) and Nick Neville (9) celebrate after making four runs against University of Tennessee at Martin on Sunday, Mar. 7, 2021 at Itchy Jones Stadium in Carbondale Ill.

In their three-game sweep of University of Tennesse-Martin this weekend, Saluki baseball  trailed only once in all three games and extended their win streak to 11, which ties their best start to a season since 1967. 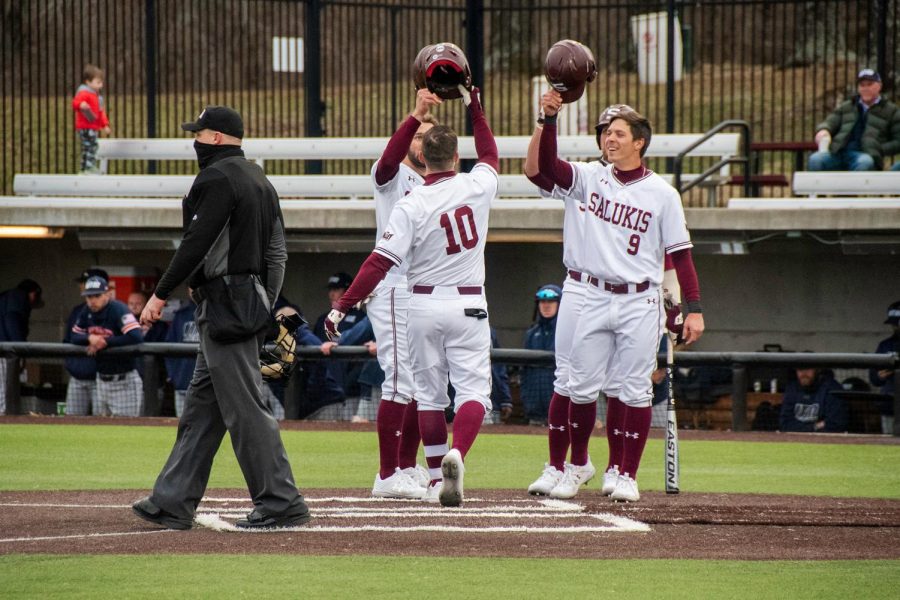 Coming into their matchup with Southern, the Skyhawks were winners of three-straight games, including a win over No. 22 Alabama.

In their first matchup on Friday, UT Martin jumped on the board first, with one run each in the first and second innings.

With the bases loaded in the bottom of the second inning, the Salukis would answer with a double by sophomore infielder Cody Cleveland to score three runs.

Senior catcher Austin Ulick would fly out to center field in the inning which brought Cleveland as the Southern hung four runs on the Skyhawks in the second inning.

“We didn’t score early, but we stung two balls right away in the first inning. We came out the gates swinging it well,”  head coach Lance Rhodes said. “We put up four in the second. We feel pretty comfortable with the way we’re swinging the bats. We need to shore up some things. We came out a little sloppy.”

Both teams were trading runs through the seventh inning when UT Martin scored three to pull within two of SIU, 9-7.

Senior infielder Nick Neville hit a three-run homer in the eighth inning which was followed by an RBI double by sophomore outfielder Vinni Massaglia.

“[Neville] swung the bat really well yesterday in batting practice,” Rhodes said. “He made one small adjustment, and everything clicked. It looked just like it had. I felt really good about him coming into the day, and he had a really great day. It was typical to what he’s been doing.”

The Salukis would add their final run of the game on a passed ball to beat UT Martin 14-7 in game one.

In game two of the series, SIU would get on the board first with a three-run second inning with eight batters coming to the plate.

Sophomore outfielder Tristan Peters got the hitting started with a double to right field, and Massaglia would then hit a single which brought Peters home.

Senior first baseman Philip Archer would reach base on an error, then back to back singles by junior catcher Tony Rask and junior outfielder Brad Hudson would bring one runner home and load the bases.

A sacrifice fly by senior infielder Ian Walters would bring home the third run of the inning.

With the bases loaded, junior infielder Grey Epps hit a ball into right field which would fall between the right fielder and the second baseman pushing their lead out to 7-2.

UT Martin was within four in the fourth inning with a home run to center field, but SIU added another run in the fifth off a single by Rask which would score Massaglia.

The Skyhawks would score one more run, but it was not enough, as junior pitcher Noah Farmer went four innings for the Salukis after relieving senior pitcher Brad Harrison.

Farmer would only allow one run on three hits, striking out three, and earned his first career save.

“We wanted to extend Noah out. He’s a guy we can use in long relief. When we go into four-game weekends, he’s a potential starter,” Rhodes said. “It’s a different ball game when we have to go to four starters. We wanted to get Brad out after five so we could extend Noah a little bit.”

In the final game of the series, it looked like it would be a pitcher’s duel until the Salukis struck first in the third inning.

“A pretty good pitcher’s duel there at the beginning part of the game,” Rhodes said. “[Ben] Chapman was throwing extremely well.”

Chapman only gave up one run across five innings with five hits and seven strikeouts.

Chapman was able to pitch with confidence as the Saluki only gave up one error in the game, as he threw 75 pitches, 57 of which were strikes.

“Knowing that my defense was behind me and filling up the zone with strikes,” Chapman said

Neither team got a run on the board until the third inning, with senior catcher Austin Ullick up he roped a triple to the right field wall.

“[Walters has] been what I call steady eddy, every single day he shows up at the park,” Rhodes said. “You look at the scorecard and it looks like he’s got two hits every single game. He sets the tone there at the top of the order.”

The Salukis added two more runs in the inning when  Peters hit an RBI single through the right side of the infield. A double steal by Southern brought freshman outfielder Evan Martin home as SIU lead 3-0 after three innings.

With sophomore pitcher Ben Chapman pitching for SIU, UT Martin was unable to get a run until the fight inning when freshman second baseman hit a sacrifice fly to right field bringing the runner home from third.

The Skyhawks replaced freshman pitcher Eric Steensma, with senior pitcher David Hussey in the fifth with one out the Salukis had runners on second and third.

A three run home run by Peters to right field brought all the runners home. Senior first baseman Philip Archer then  followed Peters with a home run into right field to extend the lead to 7-1.

“He’s been clutch all year really and just hitting there right in the middle of the order,” Rhodes said. “He’s just a high on base guy, high contact rate, not gonna strike out a ton, and he’s also got some surprising power.”

The Salukis will attempt to extend their record start starting conference play on Friday with Evansville coming to Carbondale, and first pitch at Itchy Jones Stadium is at 6pm.