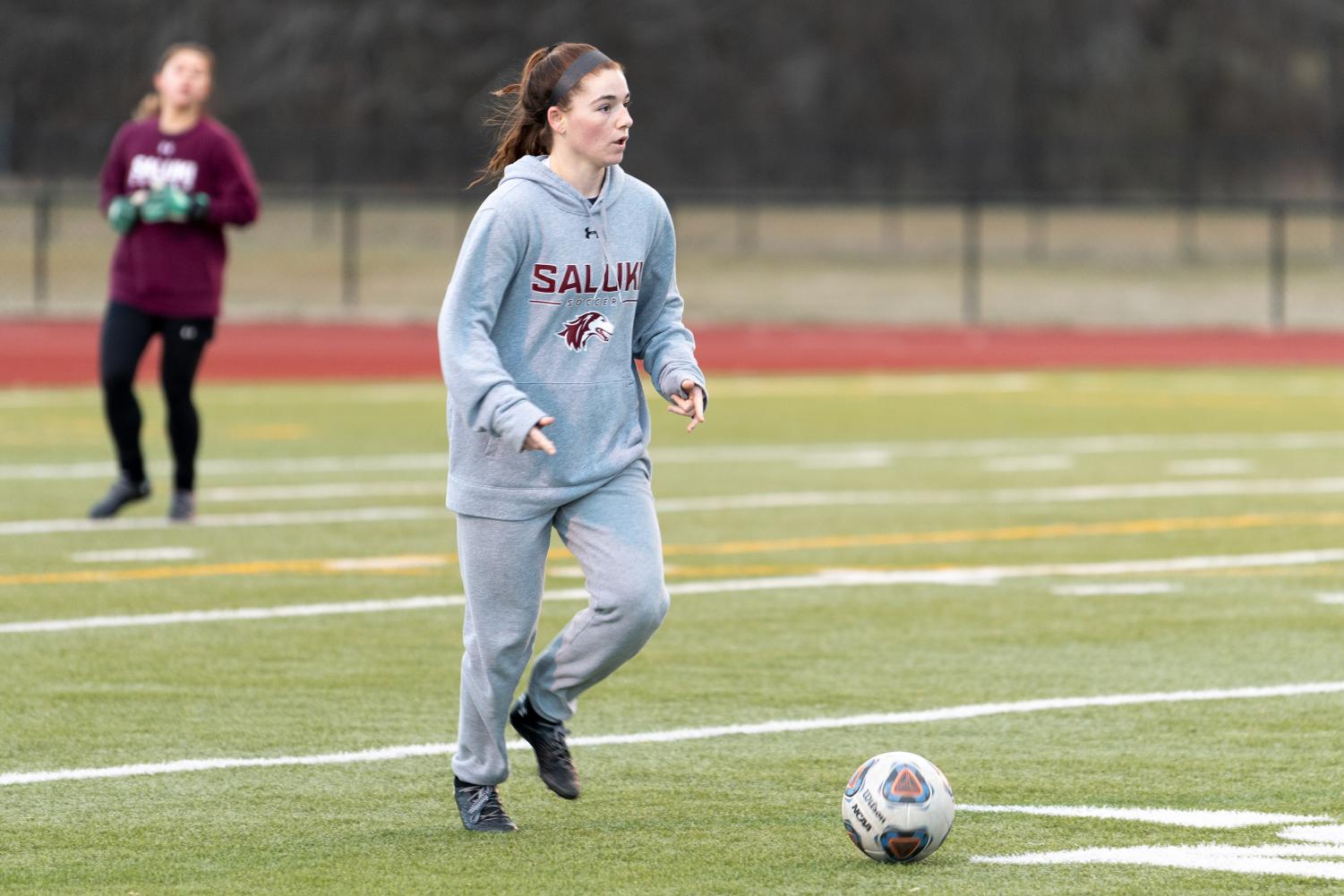 Kathryn Creedon kicks the ball during soccer practice on Friday, Feb. 5, 2021, at the soccer field at SIU. “We really need to work on execution and finishing for sure. Once the game starts we finally get to play. It’s really hard due to COVID, just school and training with no refreshment. Last year was a lot more different than this year. Last year our chemistry was not that good as now but if we work on technicality we can work on it,” Creedon said. (Monica Sharma | @mscli_cks )

Kathryn Creedon kicks the ball during soccer practice on Friday, Feb. 5, 2021, at the soccer field at SIU. “We really need to work on execution and finishing for sure. Once the game starts we finally get to play. It’s really hard due to COVID, just school and training with no refreshment. Last year was a lot more different than this year. Last year our chemistry was not that good as now but if we work on technicality we can work on it,” Creedon said.

The Saluki women’s soccer team announced the start of their season, and their first game is set to take place on Feb. 17 against St. Louis University. 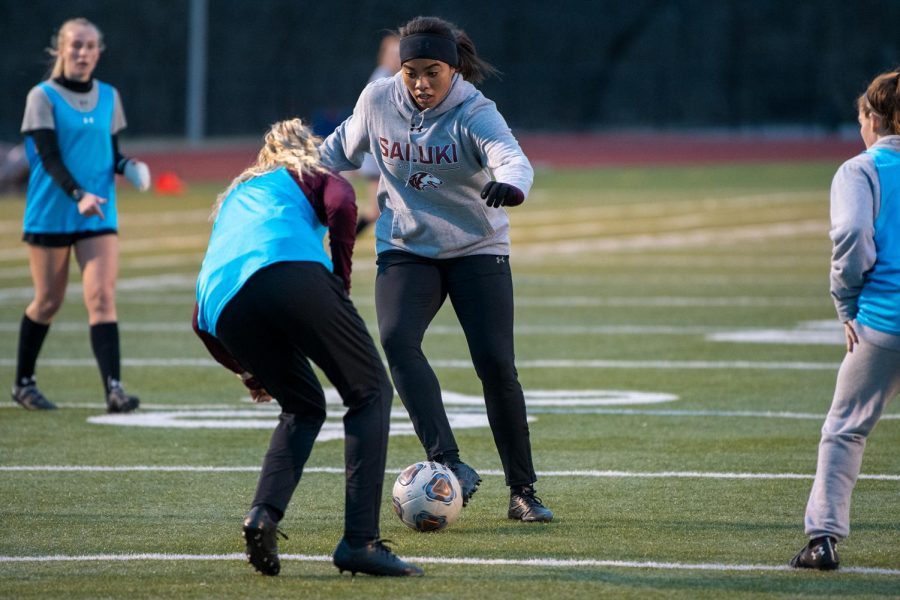 Gallery|2 Photos
Subash Kharel | @pics.leaks
Mia Edwards (freshman) kicks the ball during soccer practice on Friday, Feb. 5, 2021, at the soccer field at SIU. “[Because] of COVID we don't have any games right now, but so far we are practicing on training and most prominently, we are having good practice time,” Edwards said.

This will be the first time the Salukis will face St. Louis University, but they played Western Kentucky in the 2019 season.

“St. Louis has been at the top of their conference for the last several years and Coach Shields has put together a program that we want to emulate as far as their regional and national success,” Williams said.

“Western Kentucky we played last year and they took it to us. So there is another opportunity for us to show our growth and development,” Williams said.

Since this is the team’s first season as a member of the Missouri Valley Conference, this will be their first time playing many of the teams on their schedule.

Williams said Loyola will be one of their toughest competitors this season. Loyola was undefeated in conference in 2019 and their overall record was 14-5-1.

“Loyola has been a regular season champion and tournament champion in the last two years. Illinois State has been a contender, Drake has always been in the conversation in top four,” Williams said.

Loyola averaged 1.75 goals per game and the shots on goal or SOG percentage was .435.

“Personally, I definitely think Loyola is going to be our toughest competitor just because in the past seasons they’ve done very well in the MVC. Loyola is a good team, they know how to move the ball and they are very good defensively,” senior defender Kat Creedon said.

Their first conference game will be against Valparaiso University. In the 2019 season, Valparaiso was 2-15-1 and 2-5 in conference.

SIU averaged 0.71 goals per game and the averages 9.4 shots per game.

Another tough competitor for the Salukis is Drake University. Drake went 8-10-1 overall and 4-3 in conference play. Drake averaged 0.74 goals per game and 9.9 shots per game.

“We’re training with the ball six days and in addition to the days we have the ball, we’ve been lifting three days a week. On top of that, we have been fitting in some individual meetings and talking to specific position groups,” Williams said.

Their focus has been on the attacking side of the ball and they are implementing a new system of play for this spring season, Williams said

“We are working a lot more on our attacking because that is just kind of the struggle we had last season with finishing,” Creedon said.

Creedon said attacking is their number one priority, along with 1v1 defending.

The Salukis have added a few new freshmen to their roster who add a “fiery spark to our team,” Creedon said.

“Ashlyn Henrie from day one in August really set the standard high in just how she approaches fitness and technical execution. She’s been somebody who we knew would factor in getting some minutes early,” Williams said.

Freshman forward Mckensey Bunch will also be getting some minutes due to an injury on another player, Williams said.