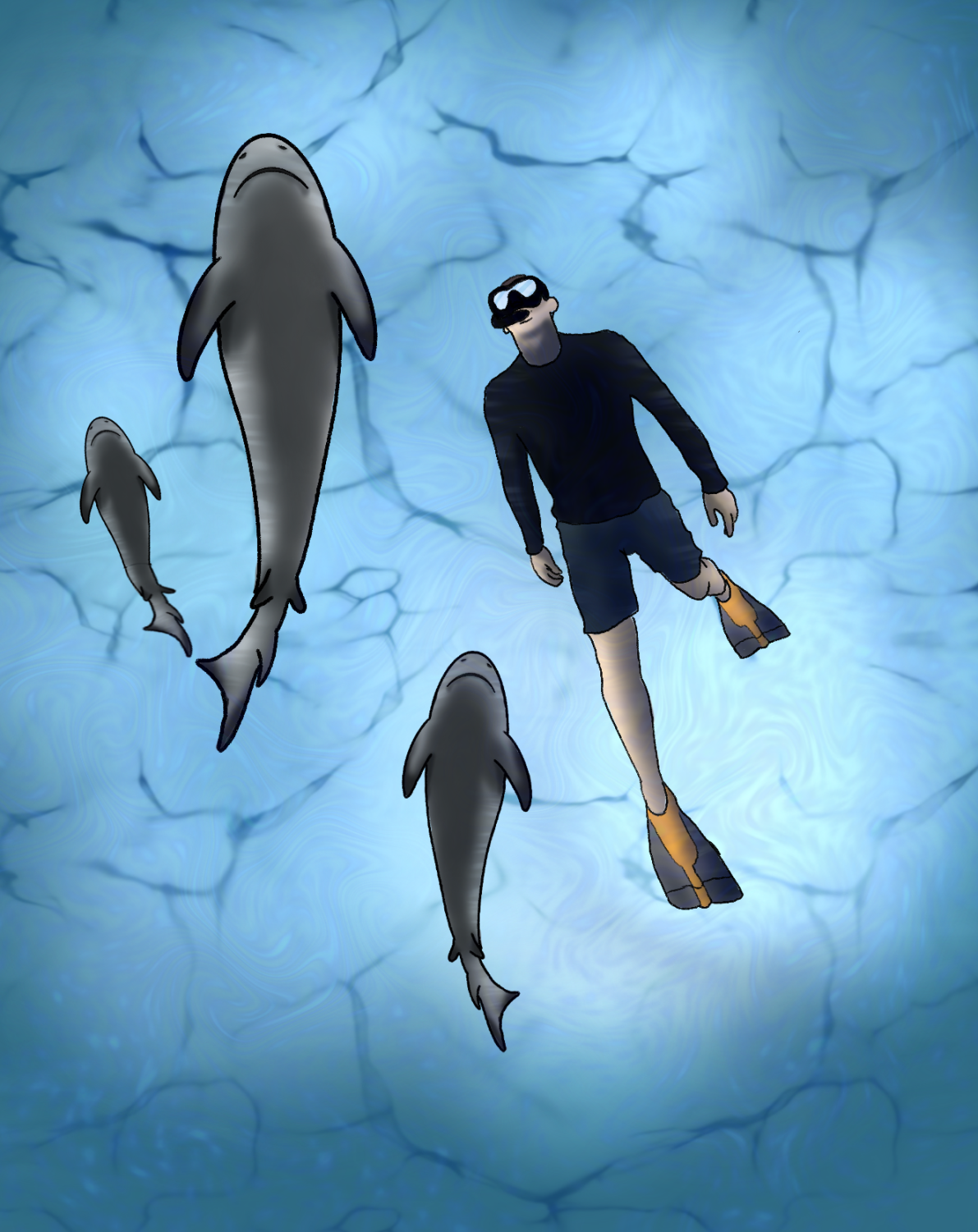 Hundreds of leagues away from civilization, the ocean’s most adapted predator stalks through rolling mountains of water and howling tropical storms, unfazed by any distance, natural defense or habitat. Its sophisticated senses burn through murky waters and catch prey out, its legion appetites drive it to take all the ocean has to offer. Humans are the ocean’s biggest predators, capable of inflicting grievous harm on other species in absent mindedness, and rapidly consuming them to complete extinction when they have something to gain. However, scientists like shark researcher Dr. Steven Kessel  bring humanity’s full attention to bear on the work of its fishermen, representing our long term best interests of conservation of species and the environment.

“Around one-quarter of all elasmobranch [a subclass of cartilaginous fish, including sharks] species are currently threatened with extinction,” said Kessel, who is the director of marine research at the Shedd Aquarium. “To reduce and even reverse these declines, we need good data generated by applied research to inform conservation and management initiatives.”

Kessel has many different areas of study to supervise, but he found time to present to the SIU Wildlife Society on Nov. 14 about his own special interest, the sharks of the Caribbean. Having completed his PhD in marine ecology and biology in 2009, he’s had the opportunity to study sharks everywhere from Lancaster Sound in the Canadian Arctic to the Sunni Red Sea Coast, but has always found his way back to the Bahamas, where he originally started researching sharks for his degree.

According to Kessel, sharks are roughly 450 million years old, older than dinosaurs and even the trees our human ancestors abandoned only a few million years ago. They’ve survived eons of extinction events, and have evolved into an incredibly diverse range of about 500 different shark species in that time, with scientists discovering four to five new species every year, usually in the deep ocean.

There are sharks at every extreme of evolution. Greenland sharks are thought to be able to live up to 500 years at the most, older than any living vertebrate. The Mako shark soars through salty tropical oceans 800 times denser than air at an estimated 60 miles an hour, about as fast as a cheetah can run on the savanna through thin air.

According to Kessel, “soaring” is a more literal description than one might think, “Another difference from most bony fish is that sharks essentially wind through the water, they don’t swim in the traditional sense that the fish are, and the reason is that they have an absence of a specialized organ, the swim bladder, that most bony fish species have. Most Teleost [bony fish with symmetrical tails and rayed fins] can inflate and deflate the swim bladder to maintain buoyancy in the water or, you know, go up or down in the water. Sharks don’t have this, they have a very large liver which is very oil filled and positively buoyant in water, salt water at least. And that helps a little bit but essentially sharks are negatively buoyant so if they stopped swimming, they would sink. They counteract this negative buoyancy using the exact same principles of flight, creating low pressure above the pectoral fins, which are essentially acting as wings, and their pelvic fins and high pressure below that.”

Even whale sharks, which can grow to be 60 feet long, bigger than some small ships, are essentially flying through water.

According to Kessel, sharks also possess a wonderful suite of seven senses, enhanced by their unique y-shaped brains, allowing them to isolate stimuli and determine what direction it’s coming from better than most fish. On top of the five senses humans have, sharks also possess pressure senses (common among other fish) that allow them to notice where something is swimming in relation to their own bodies without looking. Not unique to elasmobranchs, but much more common among them than in Teleost fish is their electromagnetic reception, the ability to detect electrical pulses like those our nervous systems use to signal to our muscles and make our hearts beat on time.

They sense this through a series of pores above the head and around the snout, which Kessel explained in detail:

“These are tubes that are run up through the snout through the head and they are filled with the potassium rich jelly and that jelly has the same electrical properties of seawater. If you turn a shark over and just look at its nose, it looks like someone sprinkled pepper in a pattern on its nose. Those pores are ampullae of Lorenzini and the front of them has very high electrical resistance. The back of them has that too and they’re connected to the brain by nerves. As electrical pulses and magnetic pulses travel up through the ampullae of Lorenzini, there’s millions of tiny little hairs that get displaced. So the shark’s able to detect the strength of that electric field or magnetic field, but also the directions. Where it’s strongest is kind of the direction it’s coming from.”

This seventh sense of sharks can even be used for open ocean navigation in addition to predation, according to Kessel. Sharks can sense the magnetic field of the earth, guiding them when they migrate between continents or across oceans.

These traits and more made sharks well established predators, as well as a fascinating pop culture icon and research topic, but their reproductive traits leave them vulnerable to fishing companies who sell their fins for a premium at Asian markets.

Though there are a variety of different ways sharks are born, including live mammalian birth, hatching from an egg, or a combination of the two, what they all have in common is that they are “k-selected” meaning that they have a relatively long maturation period and produce few young with each birth. Pregnancies can last for years, and newly born sharks take years, or even decades to totally mature, though they’re ready to hunt and fend for themselves from birth.

“Problem is now humans do exist and there is mechanized fishing and there is fishing and fisheries that target sharks,” Kessel said. “Because they have this k-selected strategy, it’s very difficult for them to sustain or recover from any intense fishing pressure. The main fishing pressure – direct fishing pressure –  is a demand and supply situation for shark fin soup. Typically for the Asian market, especially China. They’re very highly valued for their fins. Shark fin soup is a dish that is typically served at weddings in China and throughout that part of Asia, generally at high society events. It’s very expensive. so it’s considered a sign of wealth.”

Kessel, who has visited several shark fisheries, said the operations are most often carried out by small fishing vessels seeking the premium cut of the sharks, their valuable fins. Due to the boats’ limited capacity, they dump the relatively worthless meat of the sharks they catch back into the ocean after harvesting the fins, and continue fishing for sharks, leading to large declines in the shark populations, especially near areas with large shark shark fisheries such as Yemen, Hong Kong and Dubai.

According to a paper that Kessel worked on with the Pew Charitable Trust Shark Conservation Committee, which analyzed data from 2000 to 2010, 100 million sharks are caught and killed every year. That’s an estimated 1 in 15 sharks being killed every year. This is the reason about a quarter of all elasmobranchs are at risk of extinction.

Though some people may be happy with the extinction of sharks due to their perceived danger to people, Kessel said shark attacks on humans are extremely rare, and sharks benefit the ecosystem.

Aside from causing prey species to experience disruptive population booms when they are gone, sharks also provide about 50,000 dollars each per year to the Bahamian economy in tourism money, much greater than the 300 dollars a fisherman is estimated to make by selling their fins, according to Kessel.

One of Kessel’s most successful contributions to shark conservation was a study he started while getting his PhD at Cardiff University while working at Jupiter, Florida in 2007, a couple of years after a video surfaced showing a previously unreported behavior of lemon sharks in the Bahamas. Adult lemon sharks seemed to be aggregating in specific areas near the coastline, a behavior that had previously only been observed in nurseries. Just after the study had begun, in 2008, lemon sharks became an endangered species, due to the fact that sandbar sharks, the sharks with the next largest fin to body ratio in Atlantic coast shark fishery, were no longer legal to catch. Lemon sharks have two dorsal fins, the most valuable fin type, and quickly attracted all of the fishing pressure in the area.

“We also knew that the lemon sharks were aggregating in this area where the fishery was occurring in foreign waters,” said Dr. Kessel. “And like any aggregation, for example, if you targeted the spawning aggregations, you can very quickly decimate populations, not just the local population but the population of a much larger area.”

Researchers quickly set to work examining the shark gatherings, using a fishing technique they learned from an ex-commercial shark fisherman to capture lemon sharks and give them acoustic tag implants that would make a set of noises to trigger acoustic receivers placed along the east coast by various collaborating search groups, including Kessel’s.

Eventually, it was discovered that lemon sharks were migrating to the warmer southern waters of Jupiter, Florida (where the gulf stream from the gulf of Mexico first begins to warm the eastern seaboard) to weather the colder winter months, and then returning to reclaim their hunting grounds elsewhere along the eastern seaboard. Their congregations were largely dependent on water temperature, coming between December and April when water temperatures were less than 24 degrees centigrade, and leaving in April when the temperature went over 21 degrees centigrade.

Realizing the devastation local fishermen could cause to such dense groupings of sharks, the study, done in collaboration with the Nova Southeastern University in Florida, quickly sent its results to the Florida Fish and Wildlife Service,  which oversees shark management and global fisheries in the Florida region.

“We specifically recommended the addition of the lemon shark to the prohibited species list of Florida state waters and very fortunately, lemon sharks were added to the prohibited species list for Florida state waters,” Kessel said. “It is currently illegal to target and kill lemon sharks in Florida state. That was a really good success. This was not the typical trajectory for my research studies. It’s not normally this cut and dry, but this was a very nice condensed study that had a real world outcome from applied science.”

As effective as his study was, lemon sharks are just one of many vulnerable species. Kessel’s presentation also served as inspiration for students that share his passion for understanding and preserving the natural world.

“I love sharks, I love the ocean, I’m going for marine biology. I aspire to be a marine biologist, hopefully working at the Shedd Aquarium someday,” said Krystina Shadd, a student attendee of the event. “It’s gonna have to be a group effort where everybody’s gonna have to say, ‘hey, we’re all having this problem and we would like a change.’”

Daniel Bethers can be reached at [email protected] or on instagram at commonitem6damage.

Freedom of the press and fake news

One thing that really struck us as interesting is the fact that freedom of speech is protected even more here than it is in our home country. For exam...

Opinion: As Ukraine enters peace talks, concessions may be necessary

Vladimir Putin’s reckless, full-scale invasion of Ukraine has taken an enormous toll on both countries involved in the conflict. Destruction and mis... 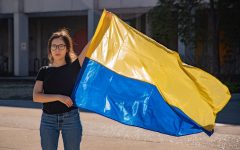 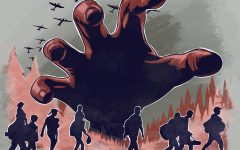 Russia is the bad guy, and I’m tired of pretending it isn’t

The “wired” war: reactions from the digital front 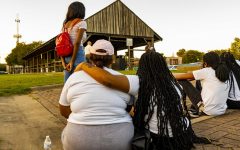 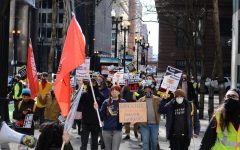 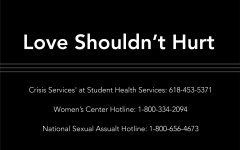 This is not how your story ends: The shadow pandemic of domestic violence