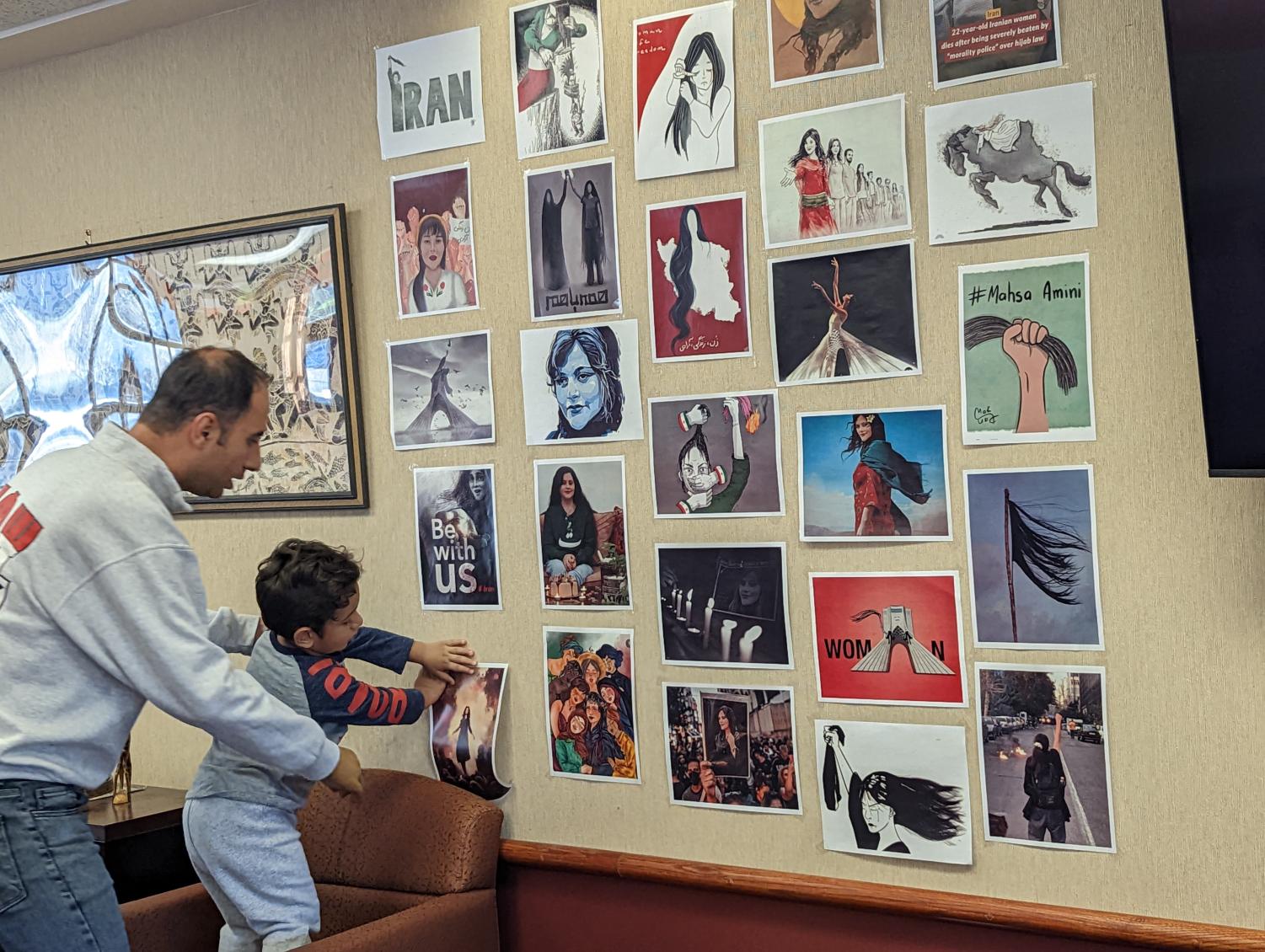 Members of the Persian/Iranian Students Association and the staff of the Center for International Education came together on Sept. 29 in solemn remembrance of Mahsa Amini, a 22-year-old who was brutally detained by Iran’s Morality Police during a visit to Iran’s capital city, Tehran, where she later died.

“Right now in Iran they cut off the Internet. They simply don’t want the world to see what they’re doing to their own people,” said president of the Persian/Iranian Student Association, Mohammed Mohammadzadeh.

For not wearing the compulsory Hijab properly, Amini was taken away from her family to a detention center, where she is reported to have been badly beaten. After falling unconscious, she was transported to a hospital, where the Iranian government claims she remained in a coma for three days before dying of a heart attack.

Like a rock tossed down a precipitous mountain peak, Mahsa Amini’s death soon built the simmering disatisfaction of the Iranian people to a thunderous crescendo heard up and down the streets of Iran in the footsteps of thousands of protestors. They cried out for the rest of the world to hear, drawing condemnation for the Iranian government from the United Nations and the international community according to UN News.

“People all around Iran, they march the street and they demand justice for those who committed such a crime. They are simply looking for freedom of speech, freedom of clothing and freedom of choosing their own life and their own destiny,” Mohammadzadeh said.

The militant theocracy did not take well to the criticisms by its citizens, reportedly turning live ammunition on protestors, killing dozens of people and injuring hundreds more, according to non-government organizations monitoring the situation.

At the Center for International Education, dozens of Iranian students and staff gathered to view pictures of six people killed in a recent protest, as well as a candle lit shrine for Amini herself. A mournful Iranian tune warbled through the speakers above the display, drifting through the air above the weighty silence of the mourners. Dozens of posters and art pieces adorned the walls, commemorating Amini’s life and protesting enforced Hijabs.

Despite the government shutdown of the internet in Iran, videos of women cutting their hair in protest have propagated throughout the Iranian community and beyond. The very hair that the government proclaims must be hidden under a Hijab, lest men are tempted by it, is held overhead, free of the Hijab until Iranian women are too.

The loss of the internet in Iran is even worse than it sounds. For many in Iran, women in particular, the internet offered the only example of a world where women have a chance to build their lives as they please, unhindered by regressive governments with only one idea of what it means to be a woman. These women, with SIU students among their number, often come to western countries chasing the source of these ideas.

Through the internet and western education, Iranians are not just wary of the old regime: they know what they’re missing out on.

“This is our next generation. How can they be strong women for our country? How can they be strong mothers for our country?” said Jenny, a woman at the vigil. “They cannot be. Not in the future of our country with these women. Maybe in the past the Hijab was good for women because there wasn’t any social media in the world and they didn’t know what was happening in other countries. Now they’re annoying, they’re asking us ‘why do we have to Hijab, but another country doesn’t.’”

Jenny asked to remain anonymous. She and other people interviewed by the Daily Egyptian for this story are quoted using pseudonyms.

Without the internet, only very rich and powerful women are able to appear in public without hijabs, without fear of the morality police.

“We don’t like it, we don’t want to have it, but I think it is a sign of their power,” said Marissa, an attendee at the vigil. “They want to make us wear the Hijab because I think it is a sign that they’ve increased their power in the country. For example, some days ago, it was a protest and many girls that wear like Mahsa were there without any problem, because they were rich and regime.”

There’s good reason to fear repercussions from the Iranian government. Previous protests that have turned violent include the gasoline protests of 2019, which, according to the Associated Press, spread to hundreds of cities and towns and also resulted in a temporary shutdown of the internet. From the student protests in 1999 to Iran’s 2009 presidential election protests, the country has often been rocked by controversy and a cycle of violence.

“Actually we didn’t choose to be Muslims. Many countries maybe have chosen their religions but because we didn’t choose this, this is why we have protests right now.,” said vigil attendee Samantha. “People are really angry about morality police because they killed girls – not just Mahsa – even before that.”

The feeling is becoming more and more prevalent, she said.

“We feel that empathy from other people: that we are all human,” Samantha said. “Because we are living in Iran and we have government that we don’t like them, it’s not our right to undergo this kind of feeling.”

Iranians now depend on those countries that inspired their effort in the first place to be their voices in the absence of their own.

“I think that when people share it on social media and talk about it, it helps me because I understand that, ok, people are getting involved in these problems,” Marissa said. “Because, in Iran, the internet is shut down, so they couldn’t do anything. We are out of Iran, so we can do something for them that are in Iran. So we need to ask our friends in Carbondale to do something to help us, to be our voices, to say something on social media. It is a thing that I need.”