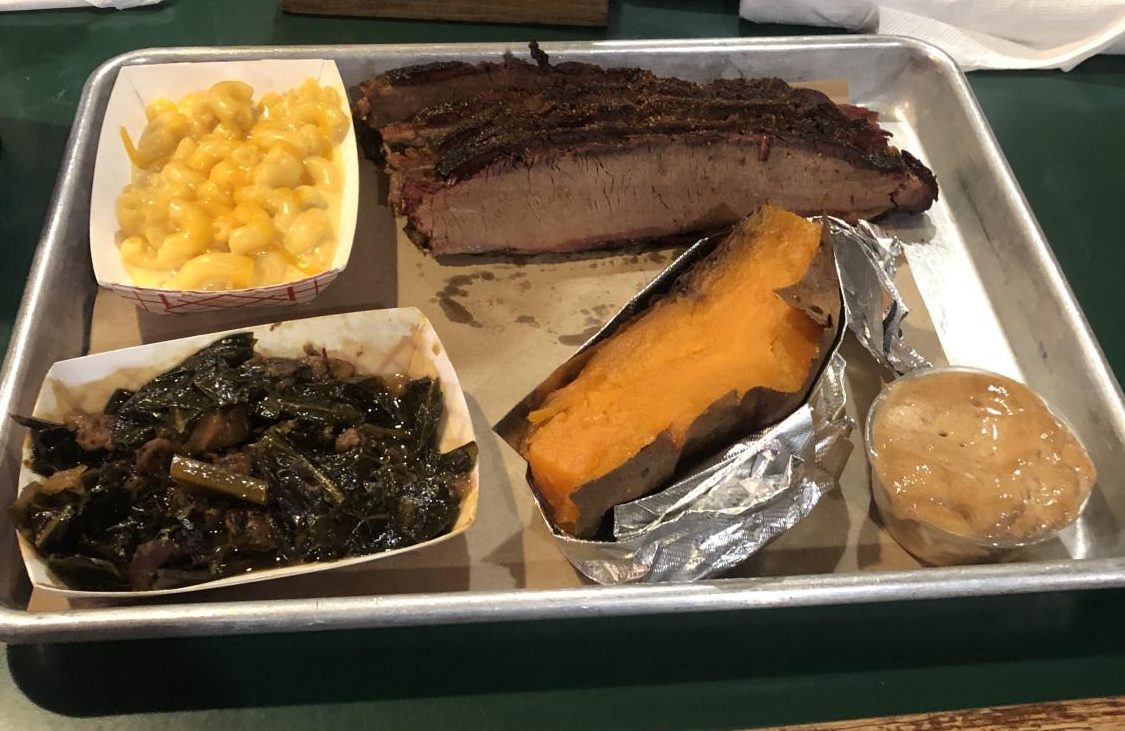 For this edition of Mannie’s Fire Feast review, I was in pursuit of some great-tasting BBQ in Southern Illinois. I traveled several miles down the road, and all signs led me to 17th Street BBQ in Murphysboro.

The restaurant is located at 32 N. 17th St. and it has both dine-in and takeout options. 17th Street BBQ has developed a reputation as one of the region’s premiere BBQ places. So without further ado, let’s see how much fire the restaurant could bring for this review.

Before I stepped into the restaurant, I knew I wanted some good brisket. I ordered half a pound of it. The menu describes it as certified sliced Angus beef that is dusted with seasoning.

I ordered brisket-flavored green beans, macaroni and cheese, and a sweet potato with butter and brown sugar for the sides.

The restaurant also has homemade barbecue sauces that are available at every table. Those sauces are High on the Hog, Original, A Little Kick and 17 St. Red. The 17 St. Red is a Kansas City-style bbq sauce, while the original is mild, and A Little Kick has moderate spice. The High on the Hog is a vinaigrette dressing sauce. Of course, I had to try all of the sauces with my meal.

The brisket was fairly seasoned and had a good smoke taste to it. However, it was also very dry. I tried all the BBQ sauces to see if they would help coat the dry meat. The only sauce that was enjoyable was the original bbq sauce. The remaining sauces had a strong vinegar taste, which overpowered the pallet.

The sides all tasted great. The sweet potato’s cinnamon butter spread is out of this world, which gives you a sweet potato pie taste. The green beans had an excellent brisket-smoke taste to them. Finally, the macaroni and cheese was made, simply put, to perfection.

I’m giving the food flavor two and a half flames. The sides alone carry the score because the brisket did not hit the mark.

The brisket was not tough, but it also wasn’t tender. I love a good brisket to be juicy and have fatty pieces. Neither of which was true of this brisket. Its texture is closely linked to dry Thanksgiving turkey meat.

The sides, however, were all digested pretty lightly and tasted good. The food texture would also have to get two and a half flames.

The restaurant follows a simple but efficient plateware model. Instead of traditional plates, tin trays covered with butcher paper house the meat. The sides are then placed inside carnival-style paper food trays.

The silverware is simply wrapped up in a paper napkin. I am giving the food presentation a total of 5 flames. Sometimes less is more, and the restaurant follows the industry standard of tin trays.

I arrived on a pretty slow Wednesday evening, in which there was only one other party there dining. As soon as I entered the door, the waiter eagerly greeted me.

The waiter walked me to the table and explained the menu and sauces on the table. It took less than 10 minutes for the food to arrive once I placed my order. The waiter also checked on me several times to make small talk and ensure the food was to my liking.

It would’ve been easy for the waiter to do the bare minimum on a slow night, but he went above and beyond. For that, I am giving the restaurant a total of five flames.

17th Street BBQ is an a la carte restaurant, which means all its food items are sold separately. The sides were each roughly $4 a piece. The half-a-pound brisket was roughly $17. The total for everything was around $37.

If the restaurant implemented lunch or dinner specials, the value of the food would improve. However, the food prices are overpriced. I am giving the food value/price a total of two flames.

There was a hand sanitizer dispenser near the front entrance. The bar was clean, and the venue had a fresh smell. The silverware was also pretty clean. I am giving the cleanliness criterion five flames.

I arrived at 17th Street BBQ on a Wednesday evening around 7:30 p.m. and dined with a friend. The restaurant does have a private parking lot, but on this night, it was not accessible in preparation for a cook-off competition later that weekend.

I drove a few blocks down and parked on a residential street. The walk wasn’t too bad on a beautiful night. I am giving the convenience a total of three and a half flames. Under normal circumstances, I would’ve been able to park in the lot, so I will not be unfair. But the parking lot is a bit undersized.

The overall score 17th Street BBQ will receive is three and a half flames. They have excellent customer service and a lovely venue but must improve the food texture of their meat.

Staff reporter Mannie Henderson can be reached at [email protected]