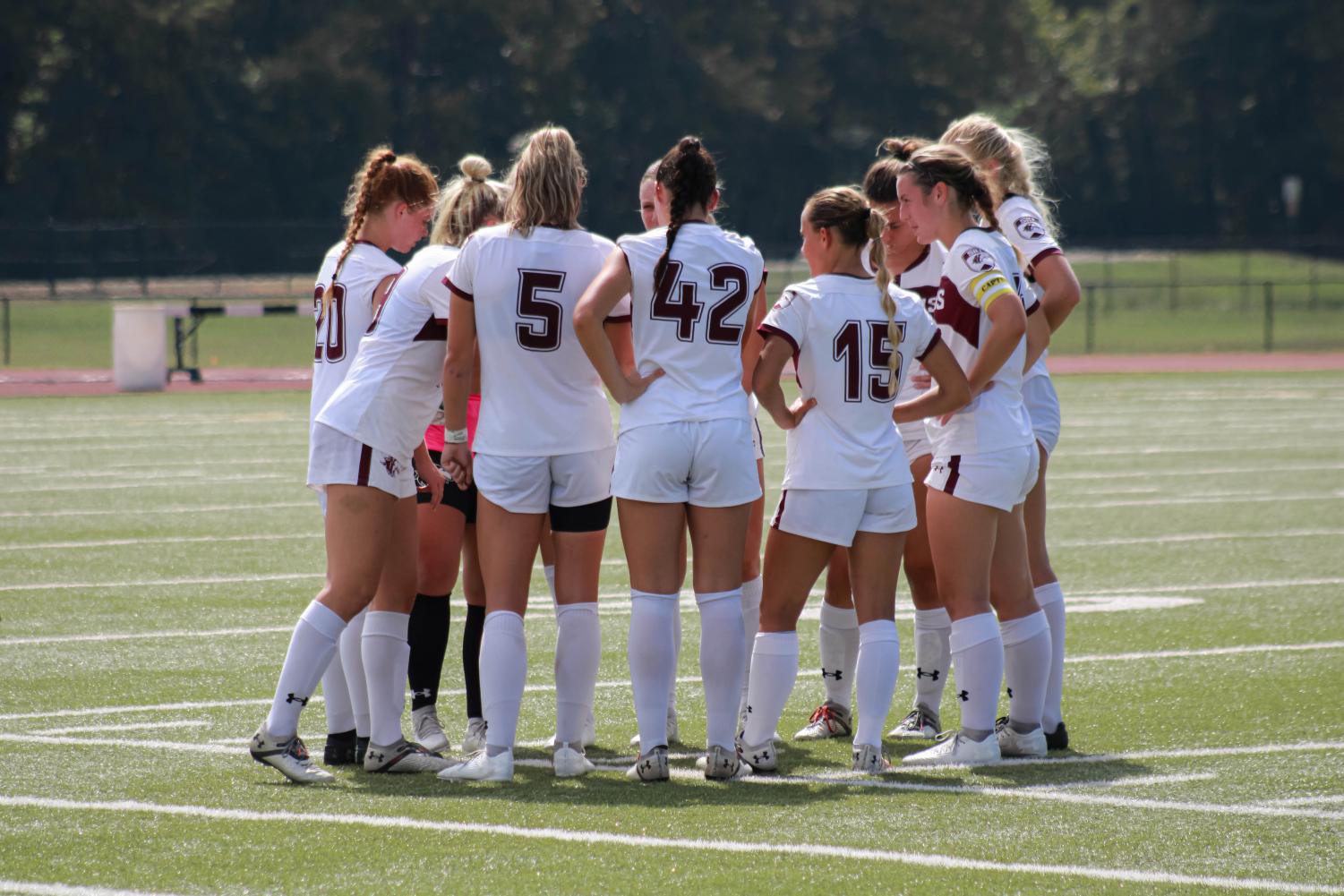 The Saluki Soccer team huddles together before the second half of the match against Drake University Bulldogs on Sept. 18, 2022 at the Lew Hartzog Track & Field Complex in Carbondale, Ill. (@lyleegibbsphotography)

The Saluki Soccer team huddles together before the second half of the match against Drake University Bulldogs on Sept. 18, 2022 at the Lew Hartzog Track & Field Complex in Carbondale, Ill.

After the termination of head coach Grant Williams’ contract in November of 2021, a 25 game losing streak, and the hiring of a new coach, the Saluki Women’s Soccer team wasn’t sure what to expect for the 2022 season.

Senior forward Liz Brechtel said the losing streak was hard for the team to get through.

“It was… hard for us to stick it out,” Brechtel said.

After not only winning their first game in two years, but being on a five game non-losing streak, with a 3-2-2 record, the Salukis are looking forward to a very successful season and a big turn around from their prior efforts.

Junior forward Sam Dodd transferred to SIU at the beginning of her sophomore year from UW Milwaukee where she won a conference championship and the team went undefeated.

Dodd said the difficulties of going to such a new program would hit her eventually, but she also knew SIU was the right program for her to continue her career at.

“To come here from a winning program and be blindsided by everything was really hard, but I knew that eventually everything would fall into place, I knew there was a reason I transferred here,” Dodd said.

The turnaround has been a long time coming, she said.

“We all knew we were capable of it, but we were missing something,” Dodd said.

The piece that the Salukis were missing seems to be new head coach, Craig Roberts.

“He brought a new energy that rebuilt us as a team and gave us a lot more hope,” senior midfielder Sam DeJulio said.

Brechtel said the players feel way more connected with each other and confident in their abilities.

During the off season, Roberts set up multiple team bonding exercises, including their ROTC Challenge event, team trivia night, and a team lantern lighting where the players wrote goals for the season for themselves and the team.

Brechtel, Dodd and DeJulio all said that the new found chemistry between the team is what played the biggest part.

Dodd and DeJulio both said that all of these things have put more confidence in the players’ heads.

“It helps to have someone in your corner at all times, I know that any of us could go to Craig on and off the field,” Dodd said.

“He believes in us and he cares a lot about us. He’s been really tough on us but it’s only making us better,” DeJulio said.

“At the end of the day I think that has the biggest impact. We’re playing for each other, not just ourselves,” Dodd said.

Brechtel said, “We’ve never been closer as a team.”

With high expectations for the remainder of the season, the Salukis have their newly instilled confidence to thank for the turn around of Saluki soccer this season.

The Salukis will try to continue their undefeated streak with a match against the Belmont Bruins September 25 in Nashville, Tennessee with a 1 p.m. start time.

Sports reporter Joei Younker can be reached at [email protected].