Saturday marked one of the biggest upsets in school history, as the Salukis (1-2) beat Northwestern (1-2) in Evanston 31-24. It is the team’s second-ever win over a Big Ten school; the first came against Indiana on Sept. 16, 2006.

“I can remember, however many years ago that was,” Saluki head coach Nick Hill said. “It’s something that you’ll always remember.”

Hill was the quarterback for that 2006 team, and threw the winning touchdown pass, one of four total that afternoon. One day after the 16th anniversary of that game, Hill’s team repeated the feat.

“We said all week, it’s not a moral victory to come up here and play with them,” Saluki linebacker Branson Combs said. “We came up here to win, and we did that.”

When the 2022 Saluki football schedule was released, few would have predicted that the team would start 0-2. Even fewer would have said that SIU would go on to beat the Northwestern Wildcats of the Big Ten, a conference that is 66-4 all-time against the Missouri Valley Conference.

Southern Illinois is no stranger to competitive games against FBS teams. It entered Saturday having led at halftime in six of its last seven games against such opponents. The Northwestern game was little different, as both teams entered the locker room at halftime tied 14-14.

A big driver for the Salukis to keep pace with the Wildcats was their success through the air. Quarterback Nic Baker started the game 11-for-11 for 138 yards and a touchdown, which proved that SIU could match Northwestern’s offense.

“It was huge to get off to a good start, just to give our team the confidence, to show that we could move the ball on these guys,” Baker said.

Three of SIU’s biggest weaknesses to open the season became its biggest strengths on Saturday. Most notably, the Salukis committed no penalties in the first half after committing 23 across their first two games, including some late-game calls that cost the team a win against SEMO in week 2.

Additionally, Southern Illinois forced two interceptions in the final two minutes of the first half, which led to the game-tying touchdown. This came after the team did not create a single turnover in the first two weeks.

Finally, their pass defense played a big part in their upset win. Those two first-half interceptions came with just 62 passing yards allowed in the first half for a defense that had previously been torched by Incarnate Word and SEMO.

“What a great response by our defense, [defensive coordinator Jason] Petrino, his staff. Backs against the wall, just came up here and just battled,” Hill said. “All of their plays that they scored on, we made them earn every inch of it. No explosive plays.”

Later in the second half, the defense came up big in two spots that shifted the momentum permanently in SIU’s favor. It forced a fumble midway through the fourth quarter deep in Saluki territory to protect a seven-point lead, and followed that up with a strip sack that set Southern up for a touchdown to push the lead to two possessions.

Baker finished the day 23-for-34 with 241 yards, three touchdowns and one interception, which was subsequently wiped by a pick by the Saluki defense. Baker frequently targeted tight ends Tyce Daniel and Jacob Garrett, who combined for over 100 yards and caught all three of Baker’s touchdowns.

“He’s a leader, he’s a captain on this team,” Baker said of Garrett, who had three career touchdown catches in 39 games for the Salukis before catching two on Saturday. “Some of his work goes unnoticed.”

Baker was looked at as a recruit in high school by Northwestern, but was not offered a spot on the team partially due to his height. The 5-foot-8 quarterback ended up with the winning score on a QB sneak to punch it through the goal line.

“I even had a 7-on-7 here when I was in high school and I was tearing up everybody here,” Baker said. “These guys didn’t even bat an eye, and I was like, I’ve just got to show them what they missed out on.”

Javon Williams Jr. was featured much more than in previous games, getting several looks in the Wildcat formation. He ended the day as the Salukis leading rusher with 55 yards on 10 carries, as well as catching four passes for 48 yards.

For the first few weeks of the season, the Salukis played well below expectations. They came into the season ranked No. 9 in the FCS, but a blowout loss to Incarnate Word and a close loss to SEMO at home sent them out of the Top 25 entirely.

“A lot of teams, easily, 0-2, two not good losses to start the season with big expectations. Easily that could blow up in your face,” Baker said. “I’m just so proud of our guys for keeping the mission in mind.”

Given what they had shown thus far, it was expected that they would struggle against Northwestern, which is less than two years removed from playing in the championship game of one of the best conferences in the country. Instead, the Salukis pulled off the fifth upset of a Big Ten team by a Missouri Valley school in history, and the second such upset in SIU history.

“With the circumstances of how we came up here… As a coach I’ve never been as proud of a group of guys,” Hill said. “Two tough losses, and the fashion that we got beat week 1, and the way we got beat last week coming down to the last second.”

One win is not enough to save a season, but if any win could put the Salukis back on track, this would be the one. Defeating an FBS team is a major accomplishment for any FCS school, no matter how their season had gone to that point. To not only beat the Wildcats as heavy 14-point underdogs, but to do so in a fashion that shows great improvement from the team’s biggest issues coming into the game, is a massive achievement for this Saluki team.

“I think it’s a credit to us that our confidence didn’t waver even a little bit,” Baker said. “We came into practice, and we knew we didn’t put our best product on the field the first two weeks. We just wanted to do that. We wanted to play good ball.”

With the win, SIU finishes its non-conference schedule with a 1-2 record. While the record is not what the Salukis would have liked, they can look at this win against Northwestern as a sign that things may be turning around for them. However, the most difficult stretch of the season may still be ahead of them.

“We needed this one. We’ve spotted ourselves two losses,” Hill said. “Right now we’re going into a eight-game stretch… It’s gonna be a week-by-week grind.”

Next Saturday, the Salukis will host the North Dakota Fighting Hawks, who entered week 3 ranked No. 22 in the FCS with a 1-1 record. The rest of their Valley schedule features three more FCS ranked teams, and two on the outside looking in. The MVFC is always a gauntlet of some of the best teams at its level, and it was important for Southern Illinois to get right before it entered conference play.

“We’re gonna be in battles similar, and be behind in this conference season,” Hill said. “It’s a great test for us for the Missouri Valley Conference.”

No matter how the rest of the season goes, fans, alumni and everyone in between will look back at this game with pride. Whether it’s later this year or 15 years down the road, Southern Illinois will always be able to claim this win over a Big Ten school on its resume. Fans can hope that the common thread connecting the school’s two Big Ten victories, former quarterback turned head coach Nick Hill, can continue to guide the team to more wins over its conference foes in an effort to save what at one time looked like a lost season. 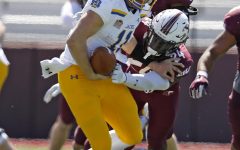 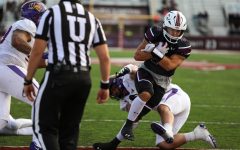 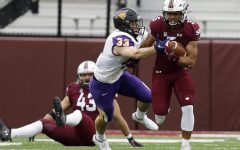