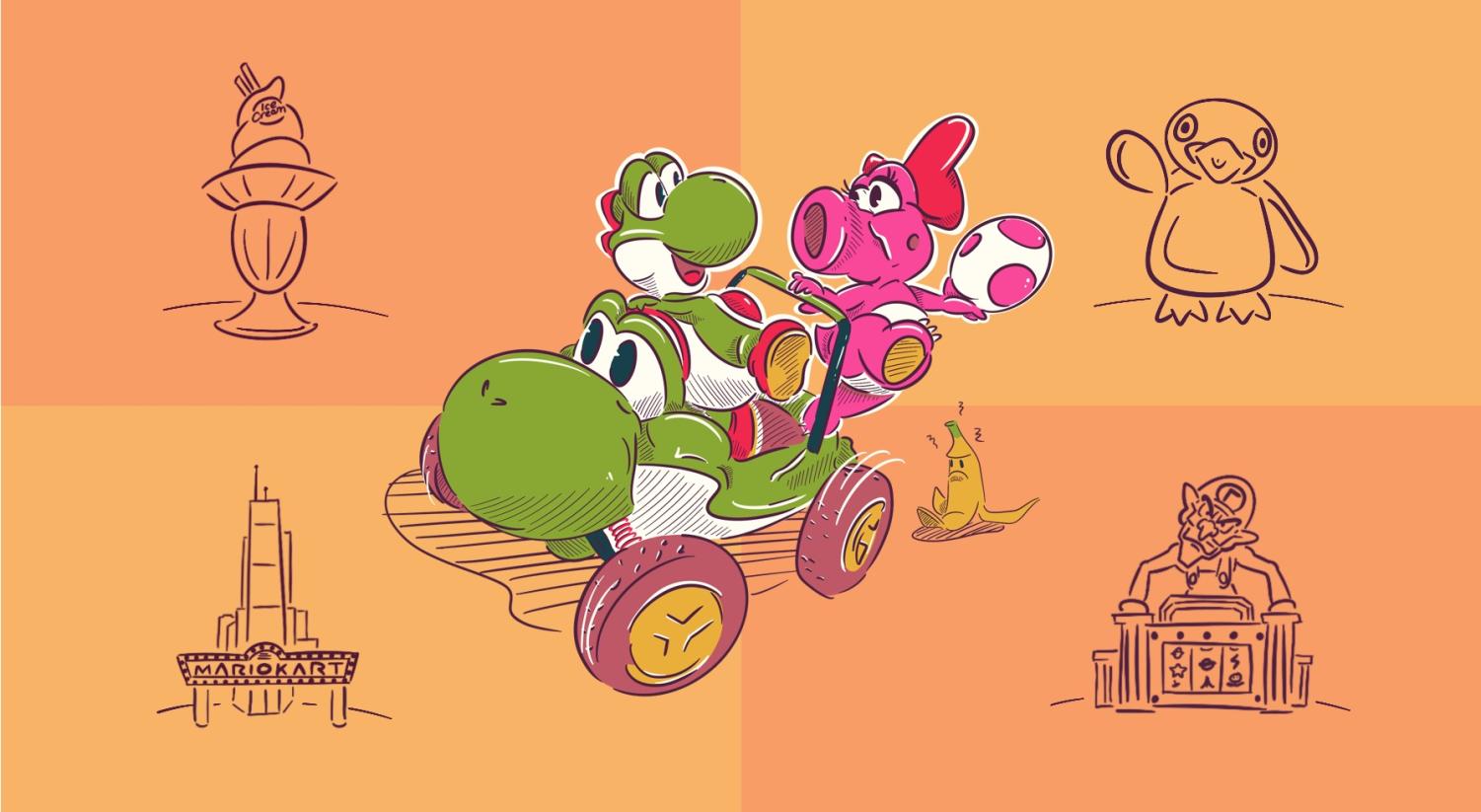 Nintendo released its second wave of downloadable content for Mario Kart 8 Deluxe on August 4. The cups for this wave are the Turnip and the Propellor Cup. I was really excited for this wave to be released because I enjoyed playing the first wave (see review) and could not wait for the next wave to come out and to see what tracks were going to be added next.

Before I started racing the new tracks I had to pick out my character and design my kart. For my character, I chose Yoshi because he is my favorite. When it comes to what I would be driving, I always pick karts because I think they are easier to drive than bikes.

The first track I went through was New York Minute in the Turnip Cup. This track was released on the Mario Kart Tour mobile app.

When the race started, I drove through Times Square and then turned into Central Park. As I was driving through the greenery, I had to make sure I did not turn too early or late because I would end up in the grass, which would slow me down.

Once I got out of the park, I ended up back in the square. When driving back through the square, I had to avoid tour buses and taxis and, on the second lap, it had me drive through the back end of the park.

As I made it through the park, it took me back to Times Square. The final lap is set up the same as the second, but a part of the park that was not available to drive through in the first two laps is now open. The new area has you go through a parking garage.

The New York Minute track was my second favorite track in this cup. One of the things I enjoyed the most about it was being able to drive through the square and just the overall detail that went into that area.

The next track, Mario Circuit, was originally released on the Super Nintendo. This track was set up like a regular race track, but just with certain elements from the Super Mario game on the sidelines such as the blocks that you hit to get items and the giant piranha plants. When I played this track by myself, it was not as exciting as if I would have played with my friends because I was racing against computers.

Kalimari Desert was the third track in the cup and was first featured on the Nintendo 64. I really enjoyed it, because it had a healthy amount of obstacles that kept me on my toes such as avoiding the train.

When I started the track, I had to be careful of which way I drifted because if I did it too early, I would end up stuck in the sand. During the second lap, you end up driving on a railroad track for the rest of the lap. For me avoiding the train while I was on the rails was hard because if I went over too far I would hit the train. On the third lap I spent the rest of the race driving through the railroad tunnel.

Once I made it through, I drove into the actual game area. While I was driving through the area I had to avoid getting hit by pinballs. I say this track was my favorite because I thought it was fun to drive through an actual pinball machine, and trying to avoid pinballs was twice as fun.

The second cup, the Propellor Cup had equally fun tracks, the first track was the Sydney Sprint, Which came out on the Mario Kart Tour which takes you  through Sydney, Australia.

The race started by driving around a well known port in  Sydney, Port Jackson. After driving around the port, I drove briefly through the Sydney Opera House. Before having to drive over a speed ramp. Once I made it across the ramp I continued the race driving past a carnival area. I then ended up driving past a train track.

During the second and third lap the track reversed and I had to drive around the edge of the port. Driving through that area required me to make a lot of sharp turns in order for me to get to the multiple speed boosts at the end.

The second track of this cup was Snow Land, this track was first released on the Nintendo Gameboy Advance. It was really fun to play because most of the course was played on ice and I got to drive around penguins.

At the start of the race, I started driving on an icy road. While I was driving on the road, I had to avoid penguins walking into the road. Once I got off the road I had to drive on a patch of ice, and  had to be extremely careful when it came to drifting because, if I did it too late or early, I would fall into this hole in the ice.

The next track was Mushroom Gorge, which came out on the Wii. At the start of this track, I drove on a dirt road leading to two diverging paths. For the first lap I took the first path, which took me straight to a cave full of mushrooms I had to bounce on in order to reach the finish line. On lap two, I went through the second path which allowed me to get closer to the higher mushrooms so I could get ahead faster.

The final track was Sky High Sundae. This track is a brand new addition to the Mario Kart franchise and includes a lot of inclines. Throughout the entire track, the player drives through this ice cream themed world. I first started out in an ice cream shop then drove off a ramp that took me directly through an ice cream cone.

After the cone, I had to drive up a bunch of stairs that lead me to this giant ice cream loop, probably my favorite part of the track.

Wave two of the DLC did not disappoint. I enjoyed pretty much every track. It surprised me when they added the new track Sky High Sundae because, when the announcement for the DLC came out, I expected all remastered courses. For wave three, I hope they add more new tracks because playing new tracks is always exciting.