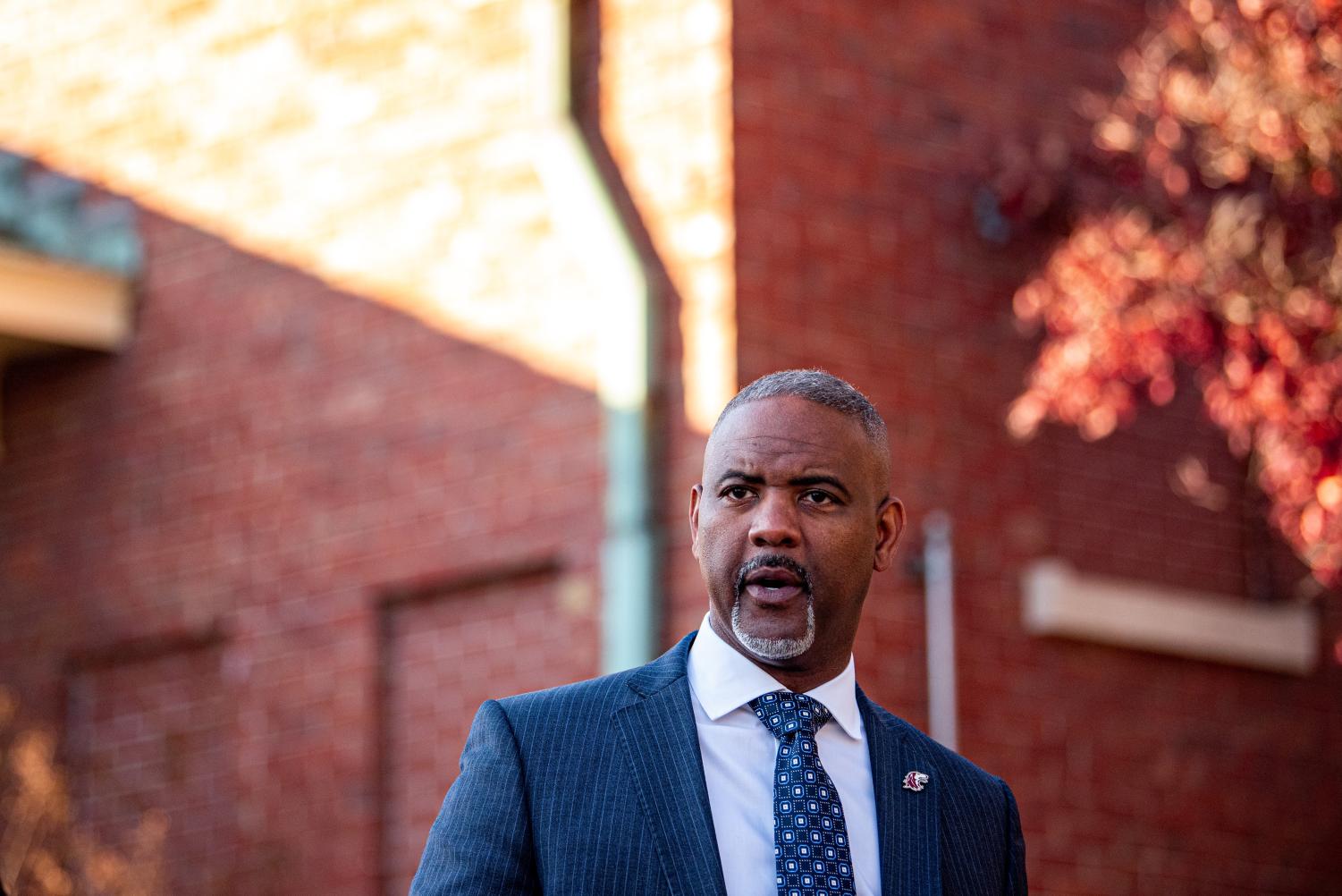 Chancellor Austin Lane addresses protesters outside Anthony Hall during the ‘die-in’ protest on Dec. 1, 2021 at SIU.

Since the announcement of the pay raises was made public, faculty and staff at SIU have expressed their discontent with the SIU system prioritizing pay raises for high level administrators while long-term employees see their salary eclipsed by new workers.

Eugene Talley, an associate professor in the automotive school at the Automotive Technology department at SIU, was one of the faculty members who spoke before the board prior to its approval of the financial compensation packages.
“I was hired in 2009… I did take a substantial pay cut to come here,” Talley said. “Since arriving, I have received the raise I earned for tenure promotion, but the university has not had a merit raise the entire time I’ve worked here.”

Talley said he served as the interim director for the Automotive school but declined the offer when he was voted unanimously to take the position permanently.

“The reason I bring this up is because I’m told I can’t receive more than a 10% [raise] and then my salary won’t be looked at until after I serve as director,” Talley said. “So if I were to be the director for 10 years, my salary will not have had a performance adjustment for 23 years.”

Talley said morale at the university among faculty, and in the Automotive and Aviation programs in particular, are at an all time low and a comprehensive review of salaries adjusting for performance is sorely needed.

Diane Lyall, a representative from the Association of Civil Service Employees, also spoke before the board, bringing the concerns of civil servants to the fore.

“We have the most interaction with students; we’re the ones who keep the university running,” Lyall said. “Nevertheless, the lack of pay increases demonstrates that the board does not regard us as important, significant, valuable or essential.”

Lyall said the recent increases to the state minimum wage have created an inequity among new and old employees, with newer hires being paid more than than 10 year veterans of the school.

“Pay inequity is becoming worse because we’re not rewarding employees who remain at SIU. Full employees are making the same or less than some part time student employees,” Lyall said.

This inequity has led to a cascading effect of experienced civil servants leaving the school while those who remain are told to increase efforts to accommodate the shrinking pool of workers and still maintain the increasing influx of new students, Lyall said.

“Many of us have found ourselves doing the work of more than one person, position or sometimes classification,” Lyall said. “Most employees have been unable to receive a personal position or receive within-classification increases to offset the expanded workload.”

Lyall said the administration is not maintaining an adequate work environment by receiving pay increases while the average employee makes $30,000/year.

Lane said he has been able to implement a two percent increase in salaries each year across the board since starting in his position, but larger increases will require time.

“It’s a marathon more than anything,” Lane said. “Our next phase is with our faculty, so our faculty senate president and faculty committees will look at the salary equity to see how we can actually drive those salaries up as well.”

Lane said continued salary increases are contingent on enrollment increasing or maintaining current levels. He said the current salary issues stem from a longstanding freeze on salaries before his arrival and an incomplete 2015 budget passed by the state senate, which led to a loss of 6000 students.

“I think we’re on the path to really moving the needle and trying to do compensation reviews in a way that’s going to help employees see some differences,” Lane said. “Everytime we see an increase in tuition revenue, and an increase in state appropriations, we’re going to put that money directly on employees so we can deal with that equity gap.”

The pay increases were proposed by Chair of the board of trustees, J. Phil Gilbert. The salary increases and bonuses were contingent on meeting performance metrics including student registration and retention and additional fundraising efforts through the SIU Foundation.

“All those who work with the [SIU] Foundation, regardless of position, receive performance bonuses when current goals are achieved,” said Trustee Chair J. Phil Gilbert. “This approach is common for universities across the country.”

Gilbert said Mahoney and Lane will be intimately involved in a $500 million fundraising effort by the SIU Foundation, a non-profit organization of allies to faculty and alumni, and the two will be helping to provide their own incentive from the Foundation.

Lyall said the money spent on administrators would be better spent raising wages at SIU to be more competitive with other similar schools and its sister campus, SIU-Edwardsville (SIUE).

Lyall said many lower-ranked employees feel the administration is receiving special financial treatment at the expense of the rest of the employees who keep the system operating.

“The administration is continuing to be rewarded with raises along with our non-represented employees, no matter what the moment is,” Lyall said. “Try opening your eyes to the hardships that our constituents face everyday. Money is not SIU’s most valuable asset, our most valuable asset is our employees.”