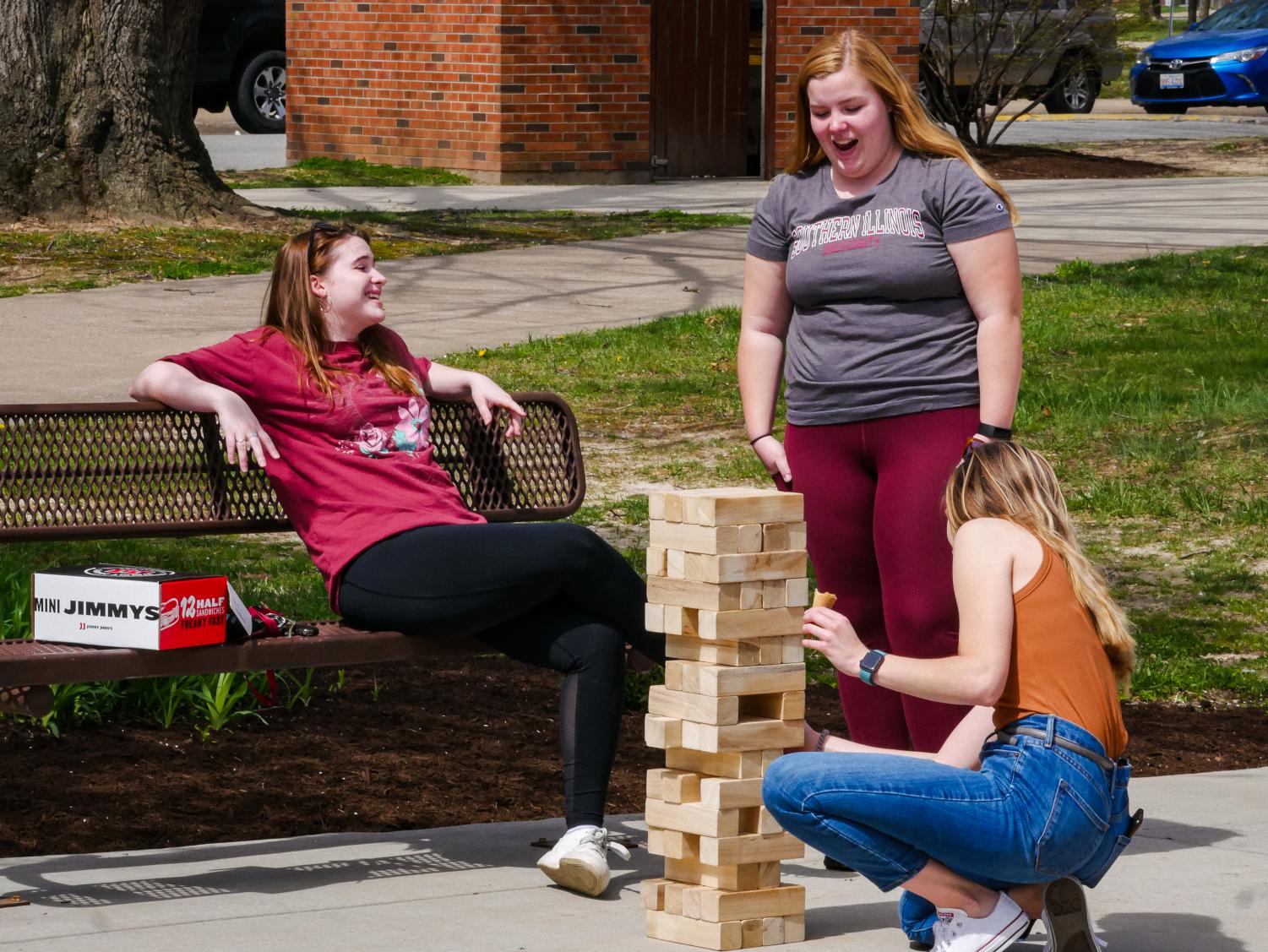 Final exams are usually the last grade of the semester and can be worth a large amount of your final grade. With the school year coming to an end, and finals fast approaching, students are scrambling to find time to study and, for some the stress is building up.

“We took a midterm, and the highest grade was an 81. I know he probably is going to curve at the end, but [I’m] still kind of nervous whenever it’s a really hard test like that,” Cantrell said.

Cantrell said she thinks the stress of the midterms in her linear controls class was a big reason why the class did not do so great. Students should make an effort to take breaks when they are studying so they do not burn out.

“If you get really overwhelmed, you can take a time off to go play a game on your console or go on a walk,” Cantrell said. “Just have some sort of outlet just to help you take your mind off of what you’re doing so you can go back to it later with a calmer mindset.”

Kourtney Sims, a second year student majoring in biomedical science, said when it comes to studying students should study in a way that makes them feel comfortable.

“I definitely am a visual learner. So, I always like to look over the PowerPoint slides and stuff. I also find it really helpful to kind of reword lecture notes and stuff in my own terminology,” Sims said.

Sims said students should focus on just doing their best when it comes to taking tests.

“I would say, at least in my experience from taking the exams and stuff in college, just do the best that you can. Be confident, and if you do end up failing and getting anything wrong, don’t beat yourself up over it,” Sims said.

Riley Sanders and Amber Morre, both fourth year students majoring in communication studies and disorders are also team leaders at the tutoring center in Morris Library.

Sanders said if students are having trouble reviewing their class notes, they should break it down in a way they understand.

“Even if the professor doesn’t provide a study guide, I can make my own, and go through the chapter touching on the big things that might possibly be on the test, and then maybe doing certain aspects of it,” Sanders said.

Amber Moore, a fourth year student also studying communication studies and disorders said students should try not to overexert themselves when they study for finals.

“If you’re constantly studying and stressing about your finals, you’re more likely to do worse on the finals because you’re not fulfilling other aspects of [your] life, like self care,” Moore said. “I would really say balance and make sure that you’re studying but also maybe going out to lunch with a friend.”

Sanders said the center has a lot of people in their program to help students better understand their courses.

“The overall purpose is to get students to not need tutoring anymore, and to learn how to study by yourself, learning to do a problem that you don’t know,” Sanders said. “I think that a lot of tutoring coaches’ strategies are that way [so] they may not need it for a future class.”

“SIU offers a lot of different Saluki Cares type of events and we host study jams that happen,” […] Moore said. “People can come get free tutoring, free academic coaching, get snacks and have an environment where they can ask for help if they need it [tutoring can] also be individualized if they need it.”

Moore said the tutoring center will be hosting another study jam April 27, from 8 p.m. to 10 p.m. Students can attend sessions where they can learn tips and skills to practice better study habits.

Hoyt Linsey, a third year student majoring in electrical engineering, computer engineering, and computer science, said although he is not too concerned about his finals he still plans on studying for them. He said students should do their best on their finals and not let the stress consume them.

“They don’t ask for a GPA except for once in your career. And it really is just like if you pass the class, that’s good enough, if you get a B or C if you tried your hardest, that’s the best you could do,” Linsey said.

Diksha Mittal, a PhD student in mass communications said when she first came to Southern Illinois University (SIU) as an international student she had a hard time adjusting and finding people to help her with her transition from India to SIU.

“I became very homesick, the curriculum here is very overwhelming and, as an international student, we’re supposed to do everything on our own all right,” Mittal said. “So I was facing all of that from the outside. I was smiling, but from inside I would miss home everyday [and] I would cry every day.”

Mittal said she overcame this struggle by practicing the Sky Breathing Technique. According to her, after practicing the technique she felt more confident and relaxed and thought it would be good to have it at SIU.

The first study done on students was at Yale University. The eight week retreat focuses on deep meditation and breathing and is geared toward helping students maintain their stress levels.

Mittal said while practicing the exercises she felt she could communicate better and was able to finish her assignments.

“I noticed that at the Sky Happiness Retreat I was able to be more present with whatever is in front of me with the people I could finish my assignment in half the time because the focus increased so much,” said Diksha Mittal. “I feel more confident about communicating and talking with students of different cultures and different nationalities.”

Kailash Yelasani, an alumnus of SIU and a founding member of the SIU Sky Happiness Retreat, said because students have so many stressors in their lives it is throwing them off mentally.

“Practicing these breathing techniques for sure 100 percent, will help us to regain those concentration levels and focus levels which [are] required to excel in academics,” Yelasani said.

Yelasani said although students cannot control everything that goes on in their life, they can control how they manage their stress. He said people should make more of an effort to actively make mental health a part of their routine.

“I think it has to be a daily practice, like how we tend to brush our teeth. It should be a regular mental hygiene as well,” Yelasani said. “We should normalize this. Everyone needs this right now. We see a lot of stress all over the place. And it’s time we should normalize Mental Hygiene and self care.”

Editor’s Note: The story has been updated with the correction Diksha Mittal is a PhD student in mass communications and an international student.