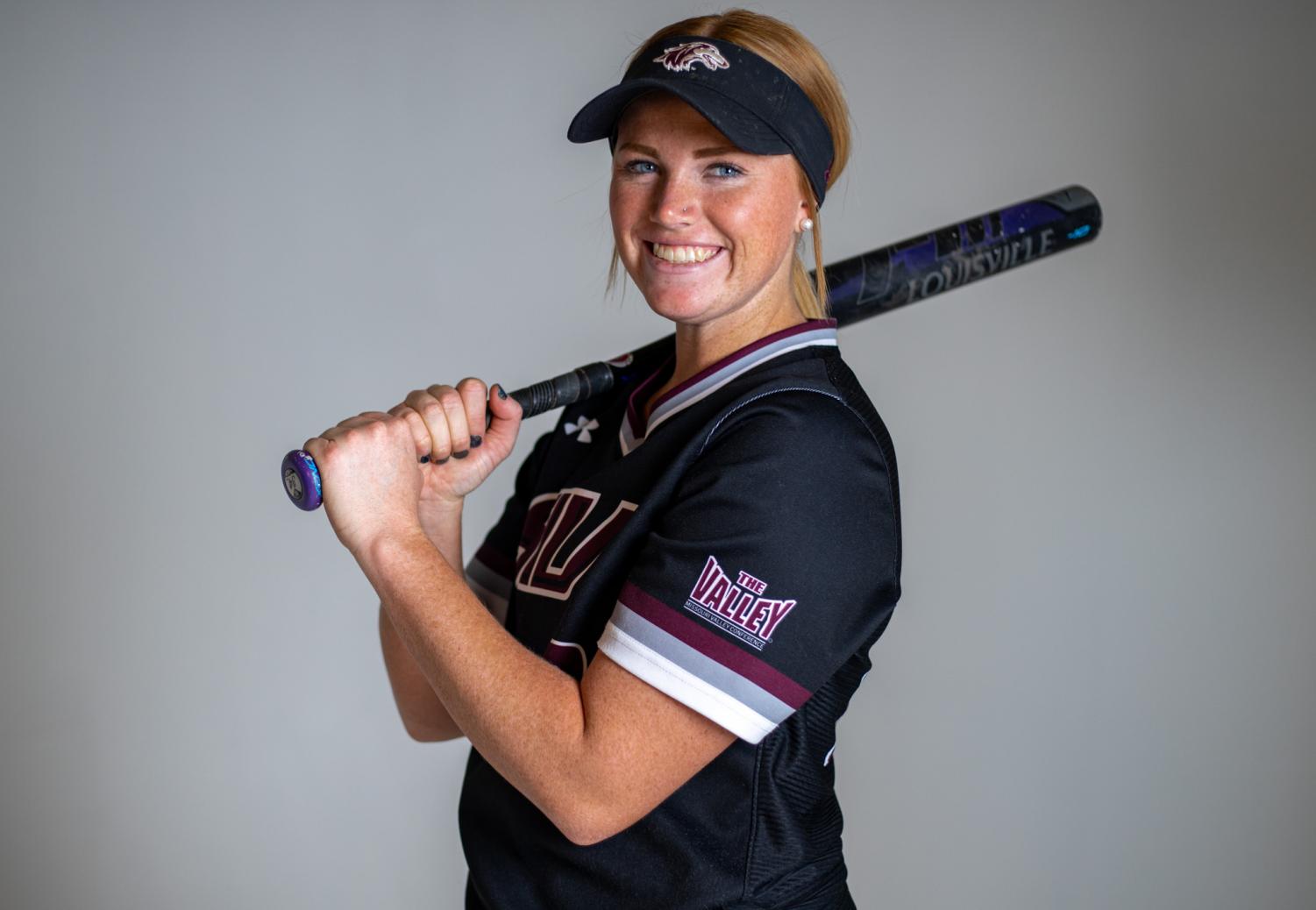 SIU infielder/outfielder Jenny Jansen poses for a photo on Thursday, March 4, 2021 at SIU. Jansen has proven to be a constant bat for the SIU softball team. Jansen was a key piece to the win this year over #22 Mississippi State on Feb. 21, where she produced three hits, including a homerun, with 3 RBIs. (Jared Treece | @bisalo )

SIU infielder/outfielder Jenny Jansen poses for a photo on Thursday, March 4, 2021 at SIU. Jansen has proven to be a constant bat for the SIU softball team. Jansen was a key piece to the win this year over #22 Mississippi State on Feb. 21, where she produced three hits, including a homerun, with 3 RBIs.

Coming off their conference championship in the 2021 season, the Saluki softball team looked to continue that type of success with many of the original starters returning as well as bringing in a lot of new faces.

As the oldest member on the roster, second baseman Jenny Jansen, has the most experience of any returning member on the 2022 Salukis, with four full seasons already on her resume. She became one of the most important players in Saluki softball history during the 2022 season.

In their March 19 game against Northern Iowa, Jansen hit a three-run single in the second inning setting her at first in the all-time RBIs at SIU, passing. Two weeks later, she hit a single down the line for her 224th career hit, surpassing Jen Feldmeier’s record for career hits of 223 at SIU.

All of this was accomplished following a tough coaching change that saw Jen Sewel take the reins as head coach for SIU.

The Daily Egyptian was able to sit down and hear from Jenny Jansen herself on her eventful season and what she makes of the season so far, her record-breaking moments as well as what she’ll miss most about the team once her last game is finished this season.

Q: You’ve broken a couple of records this year at SIU including the all-time hits and RBI leader for SIU. What does all that mean to you to be able to put your name into the record books now?

Jansen: To me, I just think it’s a lot of years of hard work. Some people might think that because I came back for my fifth year, then that’s why I got those records, but since we had the shortened Covid season, if you take the game totals from each it probably would have added up to four years. I’m just really grateful to have been able to come back and break those records but at the end of the day that wasn’t what I was here for, I was here for wins and it takes playing with really good people to break records like that so I’m just grateful.

Q: Was this something you realized you could even get to before the season started? Or even when those specific games started that you broke them in?

Jansen: No, I really wasn’t even thinking about it. At the beginning of this year, they posted on Twitter that I was in the hunt for some of these records, but before that, I really didn’t even know. It wasn’t ever really a goal of mine, I just kinda made it happen I guess.

Q: I’m sure you had a nice celebration about it after the game as well. How great was it to be able to share that with some of your teammates?

Jansen: It was a super special thing to do. You don’t really make things like that happen without having good teammates and good people around you. It was just fun to be able to share it in the moment with them and I think we even won the games I did them in so that made it even better.

Q: Speaking of great performances, you’re currently in the middle of a 27 game-on-base streak, and leading the conference in that. Do you just have a really good sense of the strike zone at the moment? What type of adjustments did you make earlier this season to continue that streak?

Jansen: I’ve just been trying to have fun these last couple of games and up until this point with it being my last year, I just wanted to go out and give it the best I can and leave it all out there. I think just going up there with the mentality that I’m either going to get a hit or a walk has really helped me do that and hopefully I can keep it going.

Q: I wanna talk about how versatile you’ve become as well. You’re mainly a second baseman, but you’ve also played first base, shortstop, third base, center-field and even pitched a couple of times throughout your career. Is all that something the coach really coaxed you into doing? Or is this something you brought up wanting to try other positions?

Jansen: I kinda came in here as a utility player. In high school I pitched and played shortstop, center field and third base, so I’ve always done a little bit of everything. Coming here my freshman year I wasn’t really sure what hole I would fill, but I was willing to do whatever to be on the field and ever since then I’ve kinda been that chess piece that moves wherever I’m needed to go. I’m really okay with it. I don’t feel like I’m spectacular at any of them but I’m good enough to just get the job done.

Q: You’re also I believe the oldest or one of the oldest players on the team from what I know, so you just have a lot of experience. How big will that be in this last push at the end of the season?

Jansen: I think at this point in the year is just where it gets hard. It’s a long season and you’re tired and people are getting dinged up and injured but at this point, my message to everyone is to go out and just have a good time because this is the last couple of games we have with each other and we don’t get to do it forever. It’s not worth getting upset about losses. It’s just the time of the year to have fun and learn from what you’re doing wrong and try to get better every game.

Jansen: A lot of people didn’t see that before, when Kerri [Blaylock] was here, she’s more like a baseball manager. She does a lot of the administrative stuff and makes sure we’re doing all the right things outside of softball and during practice she keeps up to where we’re practicing hard. Jen kinda runs practice and does the drills and hitting and that kind of thing. So in that aspect, coaching didn’t really change a lot. Kerri was kinda like a mom to all of us. I have definitely missed her, but Jen’s done a great job and I still talk to Kerri almost every day. We’re pretty close and even though she’s not around it feels like she still is. I think we’re all doing okay and obviously it hasn’t been too big of a transition.

Q: Not only are you trying to be a leader on the field but as far as I know you seem to be one off the field. You were named student of the week a couple of weeks ago with a 4.0 GPA as well as an intern at the athletic department from what I understand. You just seem like a born leader, so what does all of this really take out of a person to not only do but do well?

Jansen: I think sometimes people look at being a leader as a burden, but I think it’s an honor and I think that having the ability to guide people in the right direction is something that comes naturally to me. I feel like I’m a pretty good communicator and I have a good way of telling people hard things nicely, so it’s just something that I really do enjoy and I take pride in it.

Q: This will of course be your last season suiting up for SIU, what do you think you’re just going to miss the most about being a part of this club?

Jansen: I just think I’ll genuinely miss playing the game honestly. That’s what I love. I could care less about all the weight room and practice and such. I genuinely love going out there on the field every day playing and just having fun. Also, I’ll definitely miss all the free food we get whenever we travel.