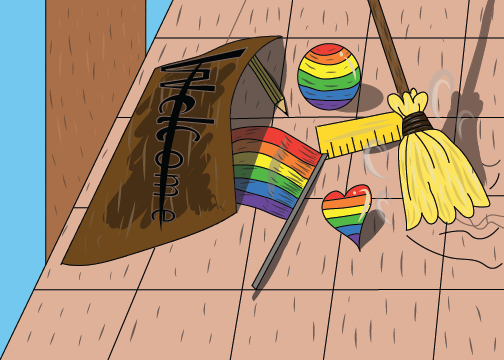 Florida’s Parental Rights in Education bill, better known as the “Don’t Say Gay” bill, was passed on March 8. The passing of the bill sparks debate over queer representation in America’s classrooms.

According to a poll of registered voters from POLITICO/ Morning Consult poll, 56% of voters had some knowledge of the bill with 44% not knowing much of the bill at all.

37% of national voters support the bill in banning the teaching of gender identity and sexual orientation in classrooms from K-3rd grade with 23% strongly opposing.

People in opposition of the bill believe it will limit the expansion of inclusivity for everyone in the education system.

Southern Illinois University (SIU) professor in Women, Gender and Sexuality studies Patrick Dilley said it would only presents one view of relationships as examples in the classroom.

“It extends beyond sexuality and talks about sexual identity and it talks about it in a way that eliminates anything that is not heterosexual, normative coupled representations of family life,” Dilley said. “That’s what is going to be most apparent to the kids who would be reading these books that some students are going to say, ‘I’m not represented in this’.”

Dilley is a gay historian and was at SIU when the school started the WGSS programs. Dilley has a different point of view as an educator in higher academia, he said.

“As a tenured faculty member, when I’ve taught issues of sexuality and sexual identity, I have had students complain almost every year,” Dilley said. “My response back to them is [that] I’m an expert in this field, and I am a tenured professor here and this is what we’re studying.”

Dilley said K-12 teachers don’t have the same teaching privilege because they have no protection over what they teach in the same way.

Dilley said he would ask the school administrators if they had pictures of their family on their desk. Most would yes and he’d tell them by doing that they promote a certain sexuality by doing so.

Dilley said students trying to figure out who they are might feel silenced, but not learning about sexual orientation and gender identity in the classrooms won’t stop students from looking for information to express themselves.

“The maturing non-heterosexuals over the past […] century and a half, have historically sought out information to try to figure out who they were and what their feelings and experiences were,” Dilley said. “[Today] it’s more likely that there is some information that’s going to be accessible to all students.”

For people going into a career of teaching at the elementary level, this could possibly limit how they connect with students in the future.

SIU student and teacher candidate Morgan Kozlowski is in the teachers education program studying to teach elementary school students and said as a member of the LGBTQ community she is shocked that legislation like this is being passed in 2022.

“It’s harmful to students and it’s teaching students to be, dare I say, hateful towards that community,” Kozlowski said. “It’s causing unwarranted hesitation and othering of the LGBT community […]  especially in a classroom environment, which I think l has to be an inclusive and safe space for all learners.”

Kozlowksi also pointed out the limitations to how teachers can connect their lives to their lessons.

“From the student perspective, the only adults that they really have in their corner fighting for them are their parents and their teacher,” Kozlowski said. “If their teacher isn’t allowed to connect with them on any kind of personal level, then the motivation for learning isn’t going to be there for the student’s part.”

A law like this would immediately put limits on students questioning who they are and targets them, presenting the notion of questioning one’s gender and sexuality as a negative thing, Kozlowski said.

Kozlowski expressed her distress at other southern states following in Florida’s steps with some places banning books with LGBTQ characters in them.

“Not only are they not going to be able to hear about it in history classes, but even like recreational times in the library.They’re not gonna have any exposure because they’re pulling books from libraries,” Kozlowski said.

Some students aren’t able to fully express themselves in their home environments and might choose to do so in school, but a bill like this one pushes a certain narrative, Kozlowski said.

Kozlowski brought up that certain european countires like France teach sex-ed at a kindergarten level and see lower rates in sexually transmitted diseases and teen pregnancy as a result.

Dilley said he does believe the bill could be passed into law, and Kozlowski hopes for pushback on what seems to be an unconstitutional law, she said.

“I think the Republican base is strong enough and they have been attempting other legislation to curtail the rights and freedoms of particular classes of Americans,” Dilley said. “There is a push to try to do this to get it to a supreme court to try to get a ruling that would allow them to [pass] even more draconian legislation to affect these classes of people.”

As the total national student debt rises year after year, more and more are calling for widespread loan forgiveness. According to research team the Ed...