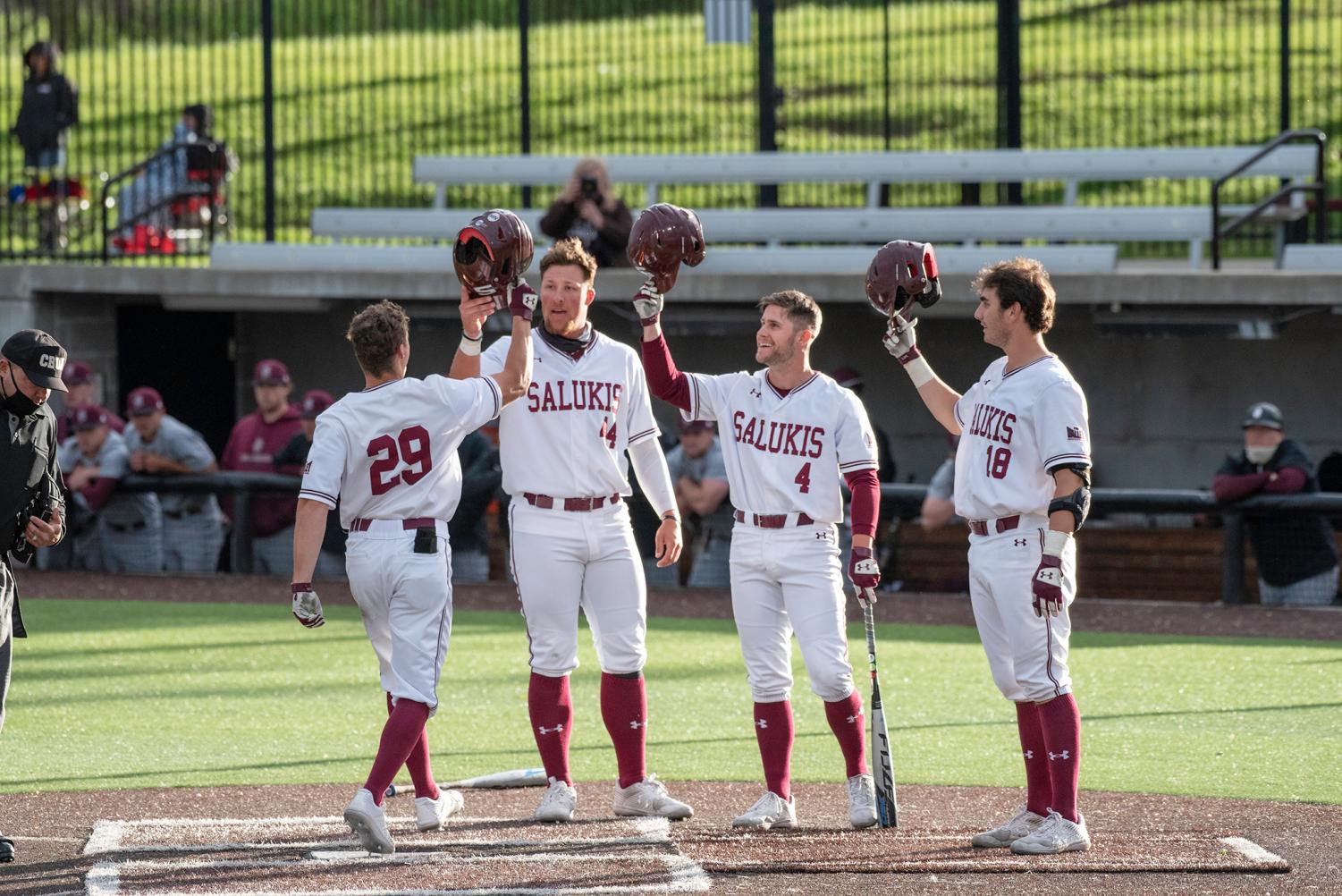 Saluki players Phillip Archer (44) Brad Hudson (4) and Tony Rask (18) congratulate Cody Cleveland (29) after hitting a home run in the second inning during the game against Bellmore on April 10, 2021 at Itchy Jones Stadium in Carbondale, Ill.

The Salukis took two games from Northern Illinois and one from Bellarmine before heading into their conference-only schedule this upcoming weekend. 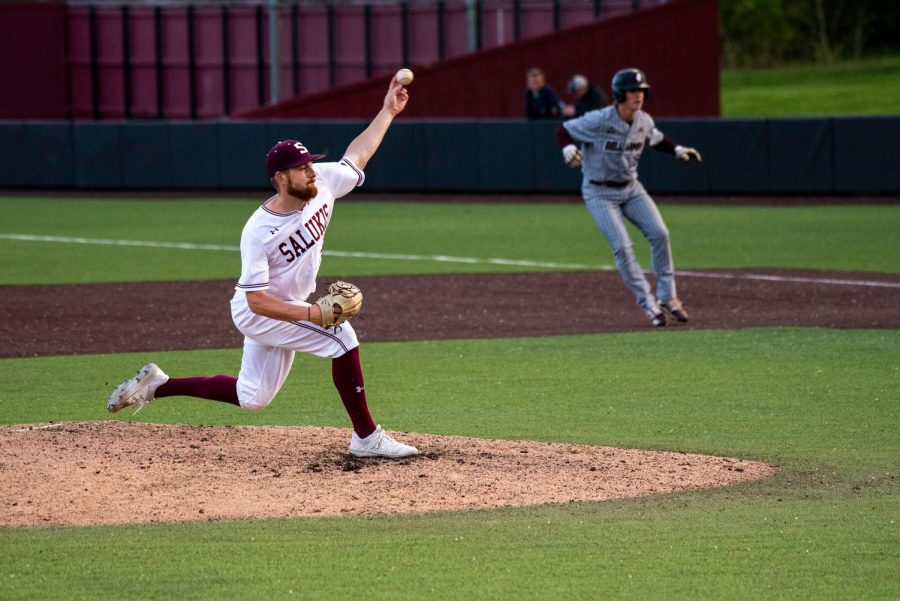 Gallery|4 Photos
Madison Taylor | @the.madisontaylor
Brad Hudson (12) pitches a strikeout during the fourth inning during the game against Bellmore on April 10, 2021 at Itchy Jones Stadium in Carbondale, Ill.

SIU (24- 6, 4-4 MVC)  was originally scheduled to take on Bellarmine on Friday at 4 p.m., but the rain and lightning in the area caused the game to be cancelled.

Southern then started their last weekend of non-conference play on Saturday with a matchup with Northern Illinois (5-21, 4-8 MAC).

Sophomore designated hitter Vinni Massaglia got the scoring for the Salukis started with a home run, three doubles in a row scored two more for Southern in the inning.

Freshman outfielder Evan Martin brought in senior infielder Ian Walters as the last run of the inning, with Southern leading 3-1 after three innings.

NIU scored eight runs over the next two innings to push out a 9-3,but the Salukis put up six runs in the sixth inning to draw within two of the Huskies.

Once again, Northern answered Southern with three runs in the top of the seventh to lead 12-7, but the Salukis hung in and answered in their half of the eighth inning.

“We were able to stay in the game when it looked like we were dead in the water,” SIU head coach Lance Rhodes said. “The offense just kept chipping away. It never felt like you were out of it with the weather conditions. The wind was gusting out to left field; it felt like you were just a hit away, especially with free bases.

Later on in the inning, with SIU down 12-11 junior outfielder J.T. Weber walked to the plate with two outs and two runners on.

On a 3-2 count, Weber roped a double down the left field line to score senior infielder Nick Neville and junior outfielder Brad Hudson to take a 13-12 lead.

“We had a bunch of people who got on in front, and J.T. got the big knock down the third-base line. In the dugout, it never felt like we weren’t going to win it,” Rhodes said. “I don’t know why it felt like that, but somebody had to get the big hit, and J.T. delivered.”

Junior pitcher Trey McDaniel who was called upon to relieve sophomore pitcher Bubba Hall in the seventh inning with one out, shut down the Huskies in the ninth getting the last batter he faced to secure the 13-12 win.

In the night cap of Saturday, the Salukis faced off against the Bellarmine Knights (10-18, 5-7 ASUN)  of Louisville, Ky.

“We were super locked-in at the beginning of the game,” Rhodes said. “I was most disappointed in the fact that we had the game in hand. Whether it was me making some changes to the lineup, I’m not sure if we felt like the game was over with at that time and our minds tended to wander.”

Senior pitcher Brad Harrison pitched well through five innings only giving up two hits to the Knights, but he ran into trouble in the sixth, walking the first two batters he faced and giving up a hit.

Harrison was pulled in favor of freshman pitcher MItchell Jackson with a runner on third up 10-3, Bellarmine scored two more runs in the sixth to cut the lead to 10-5.

The Saluki bullpen then held Bellarmine to only one run across the rest of the game, while SIU pushed four more runs across the plate to win 14-6.

In game three of the weekend, Southern defeated the Huskies 8-4, behind five innings of three hit ball from sophomore pitcher Noah Farmer.

SIU got on the board first in the second inning, senior first baseman Philip Archer walked to start the inning, a single to center field by Walters brought both Archer and junior infielder Grey Epps home.

NIU briefly took a lead in the third inning as they scored three runs, with a fly out to right field scoring the third and (last) run of the game for the Huskies.

The Salukis scored four runs over the final four innings as they defeated the Huskies 8-4.

After dropping three out of four games to Illinois State last weekend, the Salukis have pieced together four-straight wins including their win over Austin Peay State on Tuesday.

Up next, Southern travels to Bradley to open up the conference-only part of their schedule, with first pitch set in Peoria on Friday at 6 p.m.