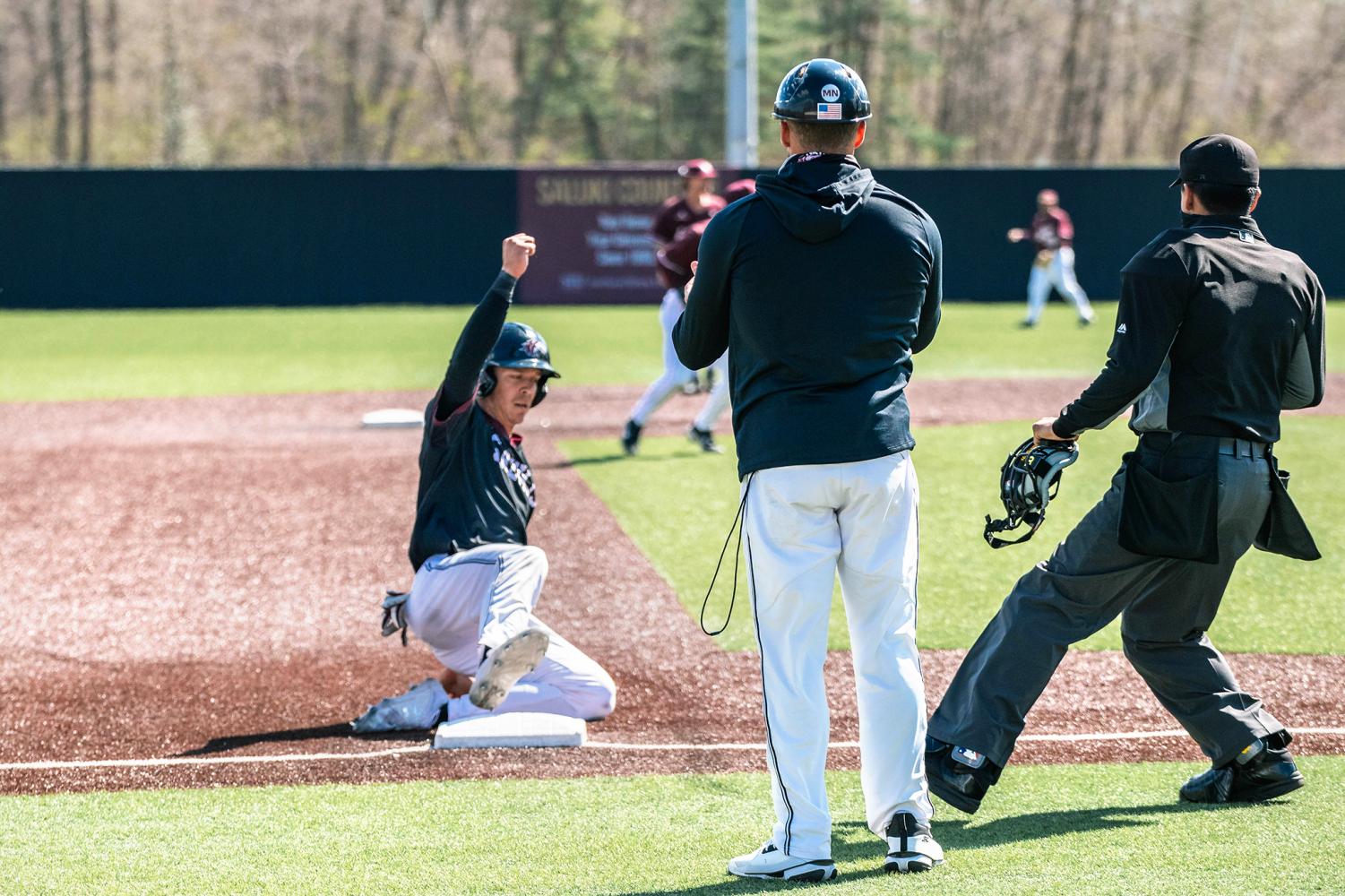 Nick Neville (9) slides into third base in game three against University of Arkansas Sunday, March 28, 2021 at SIU. Philip Archer (44) hit a single, allowing Neville to run home and score for the Salukis. (Chris Bishop | @quippedmediallc)

Nick Neville (9) slides into third base in game three against University of Arkansas Sunday, March 28, 2021 at SIU. Philip Archer (44) hit a single, allowing Neville to run home and score for the Salukis.

Salukis drop first series of the year to Little Rock

SIU baseball dropped their first series of the year to the University of Arkansas Little Rock going 1-2 on the weekend, with the Trojans having big ninth innings in both of their wins.

“I’m happy that we’re disappointed on the third loss of the season,” head coach Lance Rhodes said. “Just disappointed that we didn’t play as well as I would have hoped under the pressure of a really tough opponent.” 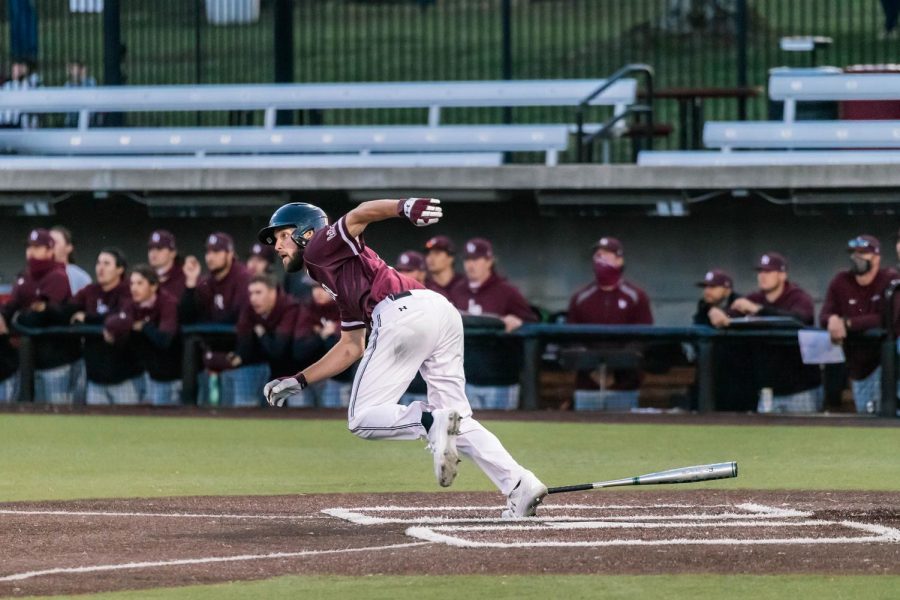 Little Rock (11-8, 3-0 Sun Belt Conference) got on the board first in game one with a three-run home run from senior outfielder Kenny Rodriguez in the second inning.

SIU (19-3, 3-1 MVC) took the lead in the third inning putting up four runs on the Trojans, after getting one out to start the inning, the Salukis would get three straight walks.

On a single by freshman outfielder Evan Martin, two runs scored for the Salukis, a single by sophomore outfielder Tristan Peters brought in two more runs to give Southern a 4-3 lead.

The Trojans answered SIU, tying the game for the third time in the sixth inning, and held the Salukis in a 7-all tie until the eighth inning.

In the eighth inning a two run home run by senior infielder Ian Walters gave SIU a 10-7 lead which held as sophomore pitcher Trey McDaniel sat all three batters down that he faced in the ninth.

In game two of the three-game series, Little Rock led 5-1 after eight innings, but SIU clawed their way back into the game.

Junior infielder Grey Epps led off the inning with a double, Walters then brought him home with a single to draw the Salukis within three.

With Walters on first, SIU loaded the bases with no outs as the next two batters reached on walks.

Sophomore designated hitter Vinni Massaglia was hit by a pitch to pull the Salukis within two, Little Rock would get a double play ball off of senior first baseman Philip Archer to end the inning.

“We’re right there with a chance and we chase a bad ball and hit into a double play,” head coach Lance Rhodes said. “Pretty much killed the rally.”

The Trojans put a crooked number up on Southern in their half of the ninth, as Little Rock brought 12 hitters to the plate to balloon the lead out to 11-3.

Southern would tack on two more runs in their half of the ninth, but were unable to come back falling 11-5 to the Trojans.

In the final and decisive game of the series, SIU and the Trojans were locked at two after three innings.

Little Rock scored to take the lead in the top half of the fourth inning, when sophomore designated hitter Noah Dickerson doubled to center field to open the inning.

Junior outfielder Miguel Soto brought Dickerson home with a single to center field to give the Trojans a 4-3 lead.

Senior pitcher Brad Harrison was relieved by senior pitcher Gage O’Brien after giving up the two hits to open the fourth inning.

O’Brien was relieved with one out in the fifth inning after giving up two straight walks, sophomore pitcher Tanner Lewis was faced with getting out of the inning with the bases loaded.

The Trojans took advantage of the situation adding another run with a sacrifice play to left field, and attempted to add another with a steal of home but they were caught stealing at the plate to end the inning.

Southern retook the lead in the sixth inning, with a home run by junior outfielder Brad Hudson tying the game to open the sixth.

The Salukis then loaded the bases with two walks and a single, senior first baseman Philip Archer grounded into a double play but it scored Neville to give SIU a 5-4 lead.

“When you’re playing another really good team you have to step up in those big moments,” Rhodes said. “Take advantage of opportunities and we didn’t do that.”

Little Rock got a run back in their half of the seventh, leading the inning off with a triple. A ground out to senior first baseman Ian Walters scored the runner from third.

Sophomore pitcher Trey McDaniel replaced Lewis in the eighth and sat the first two hitters he faced down.

The Trojans got a walk and a double with two outs, a single through the right side of the infield brought home two runners to give Little Rock the 7-5 lead after eight innings.

Much like the day before, the Trojans used a crooked inning in the ninth inning, plating four runs to bust the game open to 11-5.

“This weekend was the first time all year that we’ve really been challenged against a team that I think is as good as we were,” Rhodes said.

SIU put two runners on in their half of the ninth inning, but the Trojans were able to get Walters to fly out to end the game.

“It was a closer game than what the final sc ore showed,” Rhodes said.”We just gotta find a way to finish a game against a good opponent.”

Up next, the Salukis will face off against Illinois State for a four game series against the Redbirds in Carbondale with first pitch set for Friday, April 2, at 6 p.m.

“[We] just gotta be better, gotta be more competitive, pitching, hitting, everything,” Lewis said. “Gotta go back to work this week and try to get a sweep next weekend in conference.”