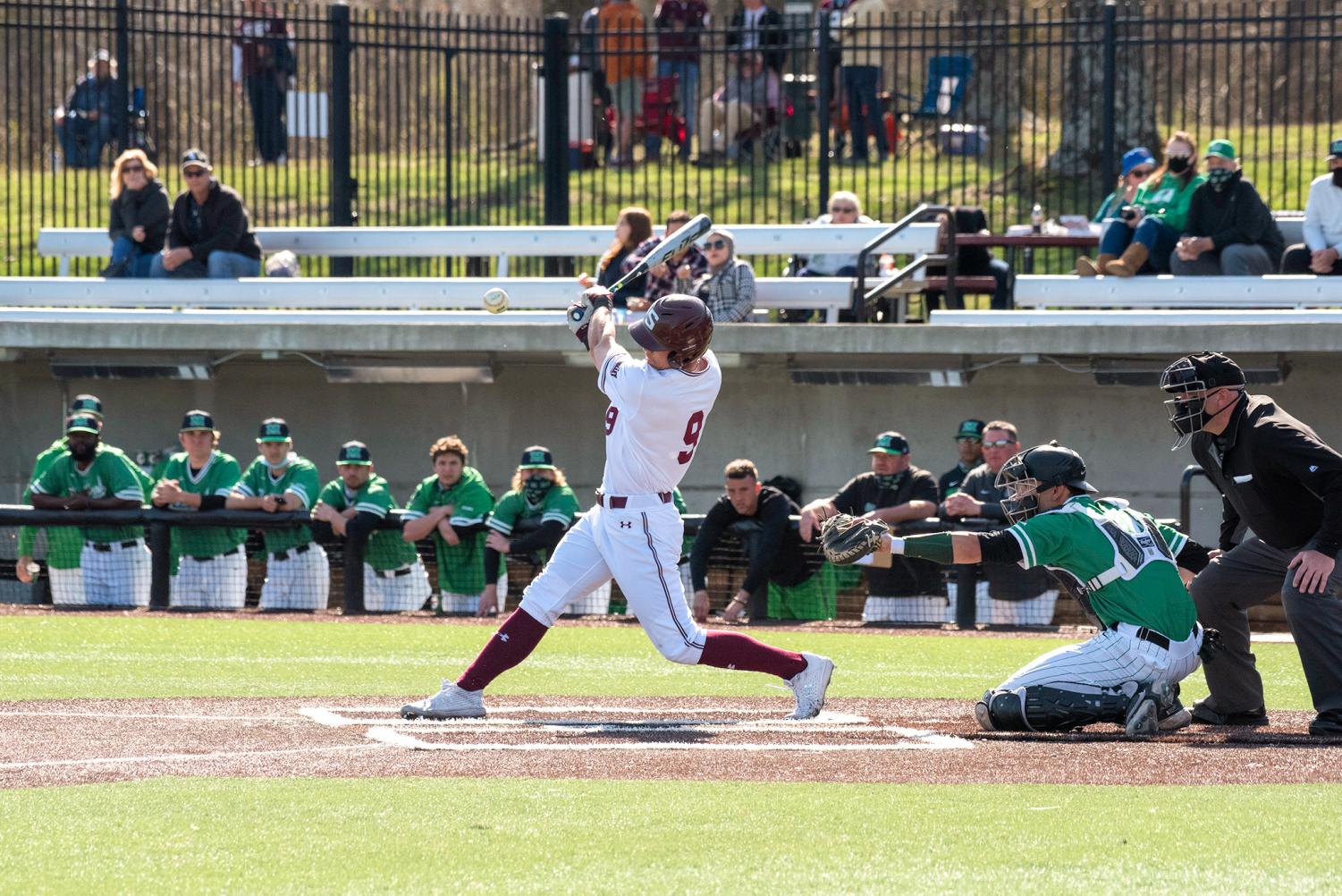 SIU infielder, Nick Neville (9), hits a pitch during the second inning against Marshall University at Itchy Jones Stadium on March 20, 2021 in Carbondale, Ill.

After suffering their first loss of the season to Evansville on Sunday, the Salukis rebounded with a three-game sweep of Marshall University this weekend on their home field.

“When we have an opportunity to sweep, learning off of last weekend,” head coach Lance Rhodes said, “the understanding that when you’ve beaten a team twice before, they’re probably going to come out and give their best effort this last game.” 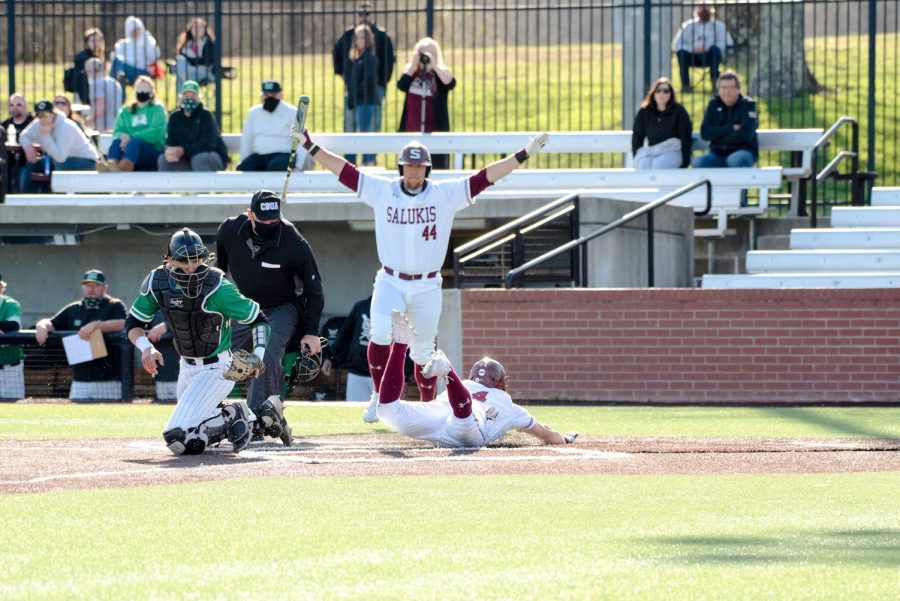 Gallery|3 Photos
Madison Taylor | @the.madisontaylor
Brad Hudson (4) slides into home plate for another steal during the fourth inning against Marshall University at Itchy Jones Stadium on March 20, 2021 in Carbondale, Ill.

In game one of the series against the Thundering Herd, Southern (17-1, 3-1 MVC) won 10-4 behind sevin unanswered runs.

“The way he looked the first two innings, he looked like a big leaguer,” Rhodes said. “He had done that a couple times for one inning. His biggest thing right now is learning how to go out and repeat that type of performance, go sit in the dugout, and then go back out and repeat it again.”

Hansell  finished with five innings of work, striking out eight batters and allowing no walks.

The Saluki bats got going early in the second inning, capitalizing on an error by Marshall, as senior catcher Austin Ulick  hit a single with two outs that scored two.

The Herd clawed back and score three more runs to take a brief lead in the sixth inning, but Southern  answered in their half of the sixth.

Marshall’s pitchers gave free passes to leadoff each of the sixth, seventh, and eight innings and the SIU offense took advantage of it.

Junior left fielder JT Weber was walked to start the sixth, and Ulick followed him with a walk putting runners on first and no outs.

Junior infielder Grey Epps then reach first base on an error loading the bases, then a wild pitch  brought Weber home from third to tie the game.

A groundout by senior infielder Ian Walters brought in one more run, and a single by junior outfielder Brad Hudson tacked on another run for  Southern.

The Salukis  tacked on two more runs in the seventh and eighth innings, while sophomore pitcher Tanner Lewis  limited the Herds offense pitching two innings and giving up one run to earn the win.

While the offense scored plenty and scored late in game one in game two of the series, it was the SIU defense that showed up in a 7-2 win.

Senior shortstop Nick Neville made two defensive stops, one that saved a run in the second inning.

With runners on first and second, Marshall junior right fielder Jordon Billups  hit the ball to Neville and he made the play to get the third out of the inning preventing the Herd from scoring.

Southern  held on to  a one run lead over Marshall until the third inning, Marshall hit a double and then a triple to bring a runner home and knot the score at one.

The Salukis  answered right back with three runs of their own in their half of the third, a single  put Epps on first base, then Walters was be hit by a pitch, two more singles  brought home Epps to take the lead.

Speed  came into play for the third run of the inning, when Hudson stole home, senior first baseman Philip Archer  grounded out to end the third inning as SIU led 4-1.

“That’s been the theme of the year. It just hasn’t been one guy. You look at Brad Hudson, Brad Hudson stepped in the first two games and he was phenomenal,” Rhodes said.

Two straight doubles  brought in another run for Marshall in the fourth,and that ended up being the last score of the game for the Herd.

Southern  added two more runs in the fourth and one run in the seventh, while sophomore pitcher Ben Chapman  pitched into the seventh inning striking out eight and giving up only six hits.

Sweep they did as the Salukis took game three from Marshall behind a dominant performance from senior left-handed pitcher Brad Harrison.

“Brad goes out and builds off last weekend, where he had his best outing of the year last weekend,” Rhodes said. “He comes back and throws basically identical to the way he did last weekend.”

Harrison came out of the game after seven innings, giving up two hits while matching his season high in strikeouts with nine.

Sophomore Vinni Massaglia as the designated hitter helped get the Salukis on the board first in the fourth with a double to right field. He came home scoring on a sacrifice fly by Weber.

With two outs in the fifth inning Neville doubled down the right field line, Peters then followed suit with a double to score Neville and give SIU the 2-0 lead.

From there Harrison  put down 21 of the 23 batters he faced to be relieved by junior right handed pitcher Trey McDaniel in the eighth inning.

“Our pitching staff has been awesome, our starters have been great. They’ve executed, they’ve attacked the strike zone. They’ve gone after hitters,” Harrison said. “Everyones had a great mentality, and it’s unbelievable knowing when they come out of the game we can go to the guys in the bullpen we can go 12 pitchers deep we have no issues with that.”

McDaniel struck out three of the eight batters he faced on the way to his fifth save of the season.

“In order to be a championship caliber team and win a bunch of games you have to be balanced,” Rhodes said “It’s not that we weren’t pitching good on that stretch earlier in the year. We are a pretty balanced club right now.”

After their sweep of the Herd, the Salukis will travel to Cape Girardeau to face off against Southeast Missouri State on Tuesday, with first pitch set for 5 p.m.

“Our goal is to win just every game on that given day. The sweep is just a byproduct of playing good every single day,” Rhodes said. “We can control how well we play. If we do that we feel like we have a chance to win every single time we step on the field.”