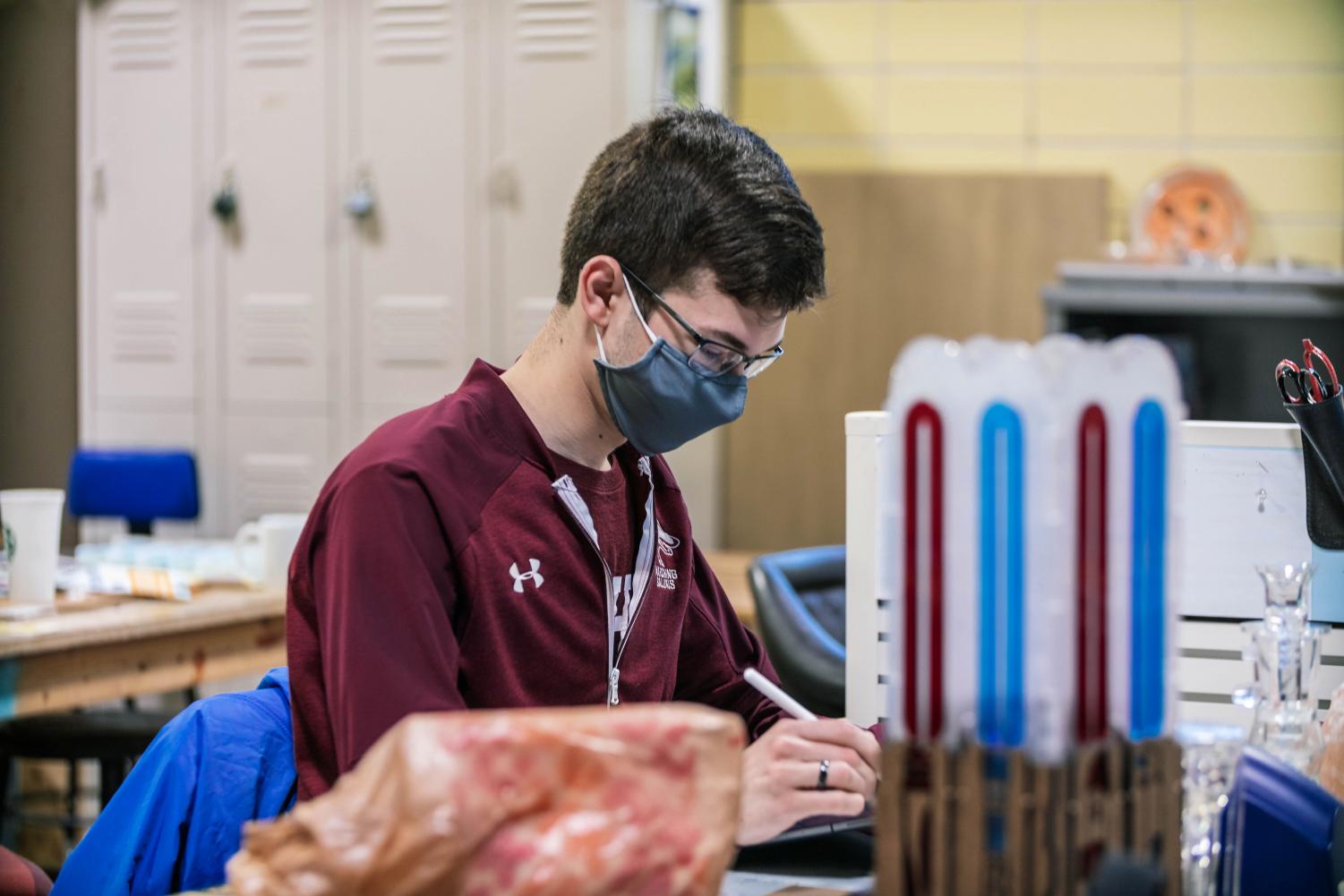 Brian Piller, a senior in Industrial Design Program, works on his iPad Thursday, March 18, 2021 at SIU. Piller is expecting to graduate this Spring as SIU prepares for it’s in-person commencement ceremony. “An in-person ceremony is one last chance to be in the same place with your graduating class, and to look back on all that you’ve done together,” Piller said. (Chris Bishop | @quippedmediallc)

Brian Piller, a senior in Industrial Design Program, works on his iPad Thursday, March 18, 2021 at SIU. Piller is expecting to graduate this Spring as SIU prepares for it’s in-person commencement ceremony. “An in-person ceremony is one last chance to be in the same place with your graduating class, and to look back on all that you’ve done together,” Piller said.

SIU’s decision to host graduation ceremonies in person this May was met with a wave of approval from graduating students despite the still-prevalent fear of the pandemic.

Kim Rendfeld, the executive director of university communications and marketing, said a large percentage of students were surveyed in the decision-making process.

“Overwhelmingly, students and their families have told the university that they want an in-person commencement ceremony to celebrate graduation,” Rendfeld said. “The feedback we’ve received since the decision was announced has been positive. Students and families are excited.”

One of these surveyed students, industrial design major Brian Piller, said he and his family were worried his graduation would not be the special occasion they wanted it to be if it was conducted online, especially after he had missed out on so many other college experiences his senior year.

“My family and I had been anxiously awaiting news about graduation for months,” Piller said. “I know my parents really want to watch me walk across the stage, and for a while it didn’t look like we’d have that chance.”

Piller said he felt like his voice was heard, and he is grateful to SIU for taking his opinion into account.

Bill Broms, a senior architecture major, said he believes students will be more motivated to graduate if they are given the opportunity to walk across the stage. He said what seniors deserve after so much turbulence and unpredictability in their education is to have a traditional graduation recognizing their dedication.

“I feel like it does motivate people, especially since what everyone yearns for at this point during the quarantine is for things to be more normal,” Broms said.

In addition to 2021 seniors, students who graduated in spring and fall 2020 will be invited to return and walk across the stage. These students have already received degrees but were deprived of the opportunity to celebrate their achievements with family and friends due to COVID-19.

Alexa Maxwell, a 2020 graduate who received her bachelor’s degree in exercise science, said she was very disappointed last year when her four years of hard work were only recognized in a Zoom call.

“My Zoom graduation last year had many technical difficulties, and I could hardly invite everyone I wanted because of the call limit,” Maxwell said. “I was disappointed, not only because I had already paid, but because I am the first of my family to go to university, and this unique experience was taken away from me.”

Although Maxwell is now living in Chicago and has already begun her career, she said it is still meaningful for her to be able to come back and have the experience of graduating. She said she was only able to celebrate with about a quarter of the family and friends she would have liked to last year.

Despite all the praise for the university’s decision, there is still an inevitable fear lingering around a crowd of so many people gathering, particularly individuals who have traveled from all over the country and parents or grandparents who may be at higher risk of COVID-19.

Rendfeld said SIU is well aware of the risks, and many precautions will be strictly in place. The ceremony will take place at Saluki Stadium and will be split up over the course of three days, allowing smaller groups to graduate together. All typical protocols such as mandatory masks, social distancing and sanitization will also be enforced.

“There is always an underlying anxiety of the threat it poses, but I think due to the precautions the school is taking and that I know my family will exercise, I feel pretty safe all things considered,” Broms said.

There are still drawbacks to these precautions preventing students from having the traditional graduation they said they wanted. Broms said he is disappointed he will only receive four tickets for his family because he is unable to invite the aunts, uncles and close friends who want to support him. Maxwell said many of her family members will have to watch her graduate on a YouTube stream.

“I am sad that only my immediate family will get to be there for the ceremony. I am close with a lot of extended family who will only be able to celebrate at the party afterwards,” Broms said. “I had a lot of my extended family there when I graduated from high school, so it feels weird that my college graduation is gonna be smaller.”

There is hope that the ceremony will be the first step in the school reopening in-person classes, events and activities. As vaccines continue to get distributed and positive cases begin to drop, the light at the end of the tunnel is starting to glow a little brighter for students.

“I’m not saying we should rush straight back to normal just yet—there is still a real danger,” Piller said. “But at the same time, I think we all need some hope that we’re moving in that direction.”