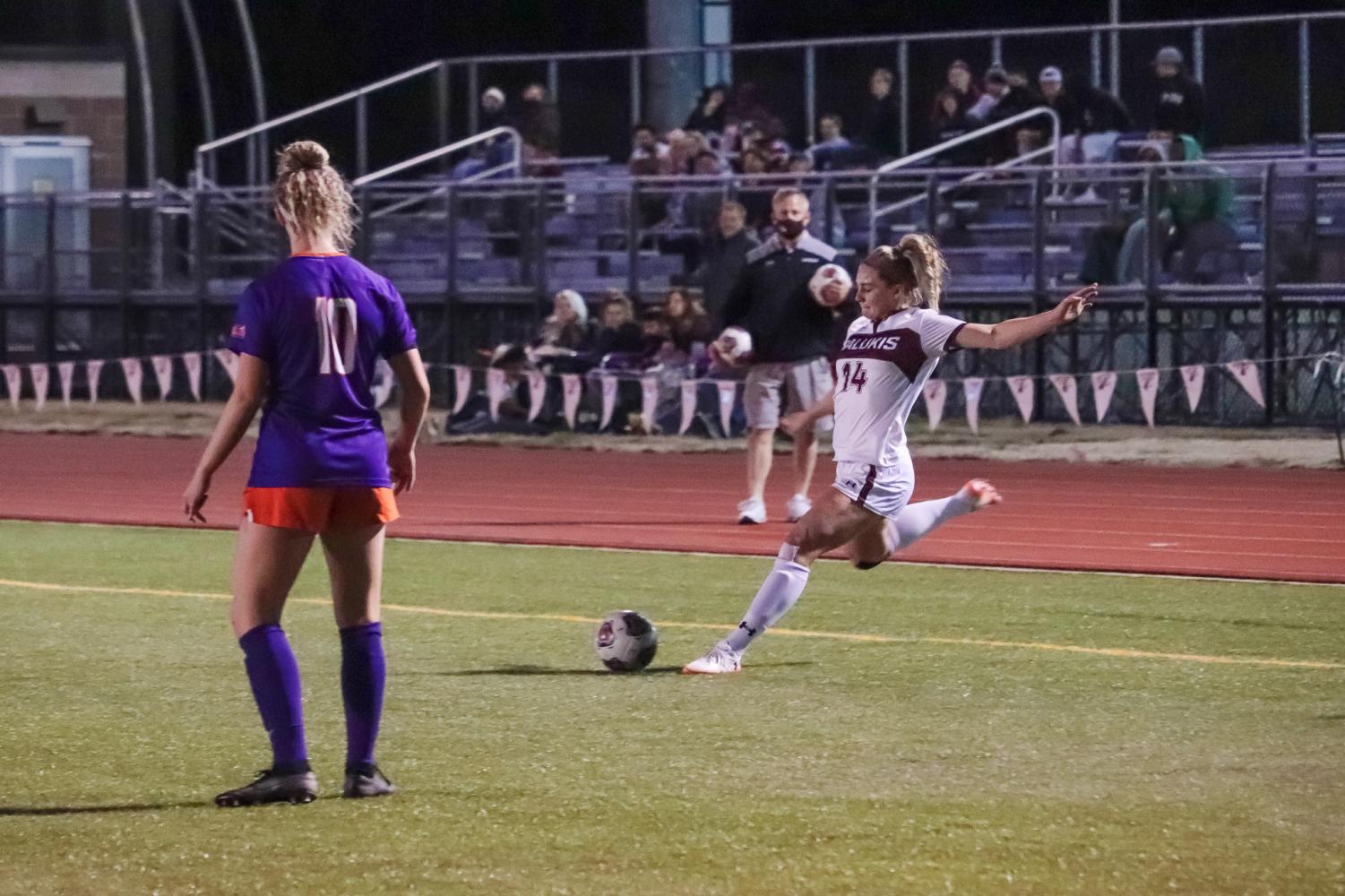 SIU ends late night match against Evansville with a tie

Southern fought neck-and-neck with the Aces but neither team was able to put a point on the scoreboard, the game ending with a score of 0-0.

“It was a tale of two halves. I thought we were a little tentative, we didn’t adjust to what they were doing and their direct style of play,” head coach Grant Williams said.

Both teams remained scoreless for the first half of the game, with the Salukis leading Evansville in shots (5-4) and shots on goal (2-1).

The first shot in the game came from Southern’s junior forward Hailey Blanchard at the 4:27 mark and the first shot on goal came from SIU’s sophomore midfielder Kailtin DuCharme, which was saved by sophomore goalkeeper Georgia Katsonouri.

The Aces shot on goal was made by sophomore defender Emilie Hill at minute 13:41 and it was saved by sophomore goalkeeper Maddy Alaluf.

“We’ve given up one goal in three games [and] we have been competitive in all three, so from a coaches standpoint that’s really all you can ask,” Williams said.

DuCharme led Southern in shots in the first half with two and junior midfielder Emily Wolak, junior forward Emily Ormson, senior midfielder Jayme-Lee Hunter and Hill tied with one shot for Evansville.

The score remained 0-0 in the start of the second half with two shots on goal from Hunter that were saved by Alaluf.

Sophomore forward Emma Spotak and DuCharme made shots on goal late in the second half that did not make it past Katsonouri.

The ball stayed in the Aces scoring territory for several minutes resulting in a scoring attempt by Junior midfielder Alex Elyer.

The second half ended with a yellow card on SIU’s junior forward Maya Warrior which resulted in a shot on Elyer that flew over the goal keeping the score 0-0 and taking the game into overtime.

SIU had two shots in the last three minutes of overtime from Warrior and DuCharme, both did not make it into Evansville’s goal. Neither team was able to score, sending the teams into a second overtime.

“The technical execution part in the final third is the difference between scoring goals and not scoring goals, so I was glad to see we were getting more shots and shots on goal,” Williams said.

The Salukis had one shot on goal by senior defender Kathryn Creedon at the start of the second overtime and Evansville finished with one shot and a shot on goal from Ormson.

With no one being able to score by the end of the second overtime, the game ended in a tie 0-0.

The Salukis will take the field again on Mar. 14 against Drake in Des Moines, Iowa at 1 p.m.