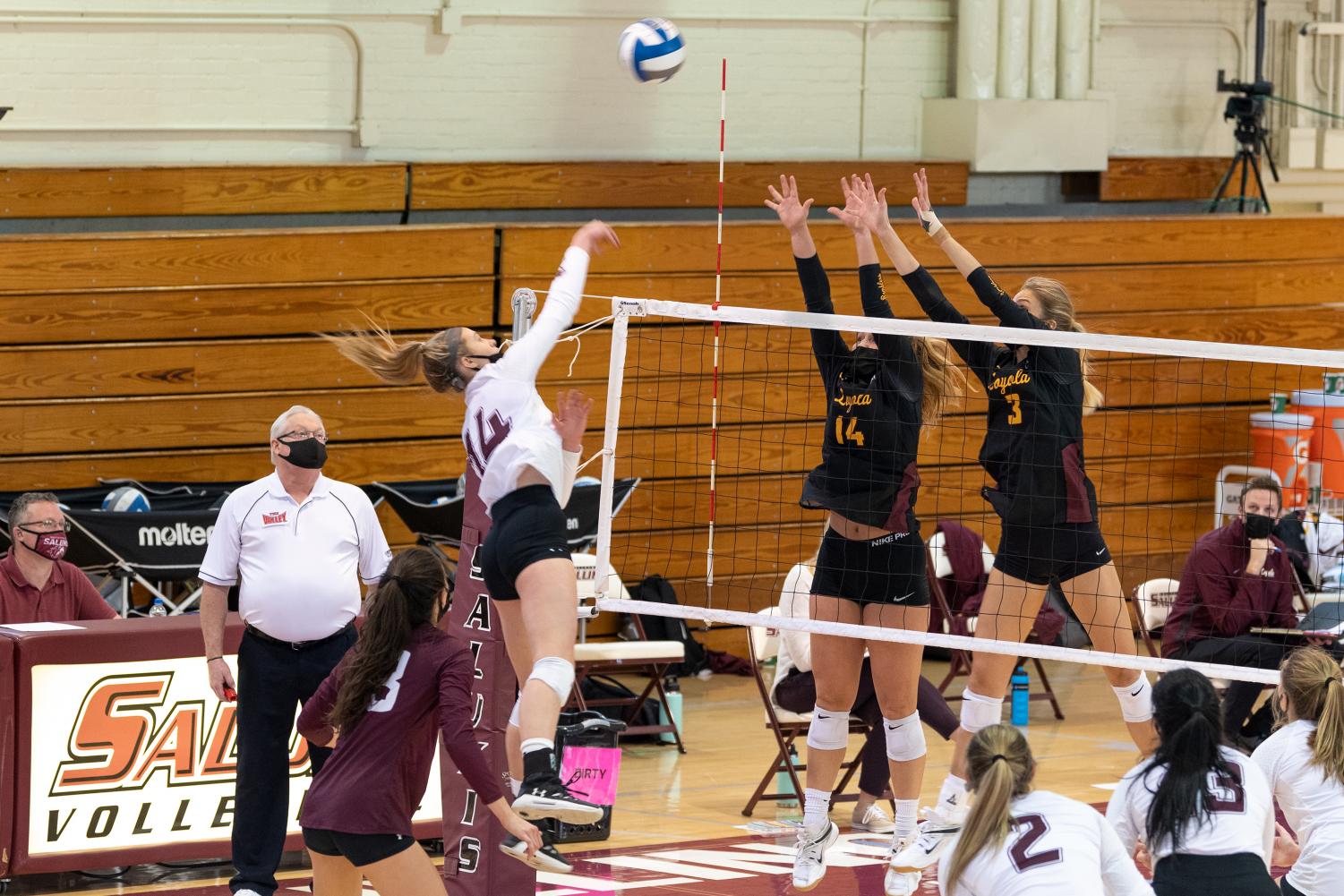 Taylor Morgan (14), with a huge leap, spikes the ball towards the opponent’s side of the court in front of two blocking opponents from Loyola University on Sunday, Feb. 7, 2021, in Davies Gym at SIU. (Subash Kharel | @pics.leaks)

Taylor Morgan (14), with a huge leap, spikes the ball towards the opponent’s side of the court in front of two blocking opponents from Loyola University on Sunday, Feb. 7, 2021, in Davies Gym at SIU.

Southern stayed close in the first set, only losing by three points, but they lost the momentum in the last two sets, losing by 12 in the second set and eight in the third.

Loyola started the first set with a three-point run from kills by Banitt and freshman middle blocker Kelsey Watson and a service ace from freshman setter Jenna Appel.

The Ramblers increased their lead to, 5-1, with a kill from Watson and a service ace from Banitt.

The Salukis closed the lead to one point with a kill and block from redshirt senior outside hitter Savannah Sheridan.

SIU tied the score, 6-6, after a service ace from freshman defensive specialist MacKenzie Houser and a block from Sheridan.

Southern took a two-point lead due to two attack errors from sophomore outside hitter Sarah Murczek and Banitt.

Loyola regained the lead, 11-9, with a five-point run with scoring from senior middle blocker Elle Van Grinsven and Murczek and attack errors from SIU.

Despite the effort on both sides, neither team was able to gain more than a one point lead close to the end of the first set.

The Ramblers gained a three-point lead, 21-18, after kills from Van Grinsven and Murczek.

The Salukis fought and decreased the lead to 22-21, from a kill Tornatta after a long rally.

Loyola won the first set 25-22, after an attack error from SIU’s Sheridan and a kill from freshman middle blocker Anna Feldkamp.

The scoring was close at the beginning of the second set, both teams stayed within a point of each other.

SIU gained a three-point lead after a service error from Loyola’s freshman defensive specialist Grace Hinchman and a service ace from Houser.

Loyola took the lead, 10-7, from a kill by Van Grinsven and servers attack errors from Sheridan and  Morgan.

The Ramblers extended the lead, 16-9, after attack errors from SIU, kills by Watson and Feldkamp and a block by Banitt.

Loyola continued scoring with kills from Murczek and freshman outside hitter Karlie McNabb and they won the second set 25-13, after an attack error from Washington.

The Ramblers started the third set off early with a 4-0 run from kills by Feldkamp, Watson and Appel.

The Salukis ended the scoring run with a kill from Morgan.

Loyola increased the lead 8-3, with a service ace from freshman defensive specialist Grace Hinchman and kills from Feldkamp and Banitt.

SIU fought to decrease the Ramblers lead by going on a 4-0 run with kills by Kyra Hunter and Tornatta, but Loyola kept the lead 11-9.

Loyola continued to lengthen their lead 20-14, after a service ace from Banitt, kills by Watson and Murczek and several errors from the Salukis

The Ramblers won the third set, 25-17, after kills from Appel, Banitt, and junior outside hitter Maya Popernik completing the sweep 3-0 against the Salukis.

Southern will face the Ramblers again at Davies gym on Feb. 8 at 3 p.m.