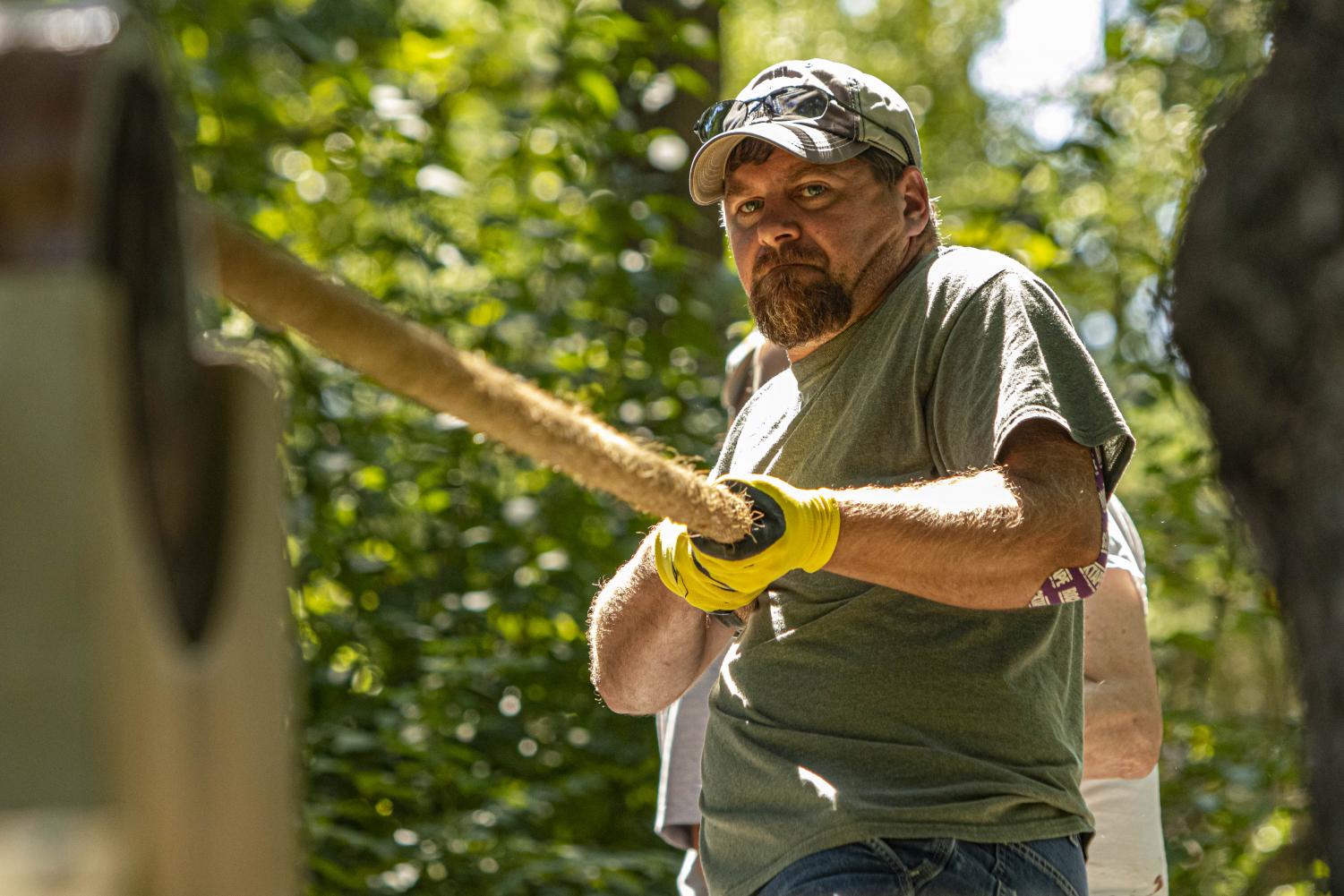 Barron Archey pulls the rope to the pulley to see how much weight could be pulled with Stephen Blakely’s proposed Egyptian pulley system Saturday, Sept. 5, 2020, in Anna, Ill. Steve Berkley displayed the pulley system that he thinks the ancient Egyptians used to build the pyramids. Stephen said his goal was, “to demonstrate, that we could marshal five pullers together, to pull together.” (Jared Treece | @bisalo)

Barron Archey pulls the rope to the pulley to see how much weight could be pulled with Stephen Blakely’s proposed Egyptian pulley system Saturday, Sept. 5, 2020, in Anna, Ill. Steve Berkley displayed the pulley system that he thinks the ancient Egyptians used to build the pyramids. Stephen said his goal was, “to demonstrate, that we could marshal five pullers together, to pull together.”

Different people believe the pyramids were built in different ways: ramps, forgotten civilizations, aliens, Stephen Blakely said he believes the Egyptians were smart enough to use one simple tool: pulleys. He attempted to test part of that theory Sept. 5.

By Matthew Alleyne and Jared Treece

Gallery|6 Photos
Jared Treece | @bisalo
Mechanical engineer, Stephen Blakely (Middle) looks on as the platform used to support the pulley system collapses. He displayed the pulley system that he thinks the ancient Egyptians used to build the pyramids. Different dumbbells were added inside the basket to see if a group of people could pull the weights together. Stephen said his goal was, "to demonstrate, that we could marshal five pullers together, to pull together." Saturday, Sept. 5, 2020, Anna, IL.

Stephen Blakely, a 77-year-old retired mechanical engineer, has spent the past couple of years testing his theory of how the Ancient Egyptians might have moved the stone blocks they used to build the pyramids.

In 2013, a group of mechanical engineering students at the University of Illinois, sponsored by Blakely, did the original test of the pulley theory. On Sept. 5, 2020, Blakely demonstrated the theory in person with some family and friend help.

Having designed an angled surface to emulate the 52 degree angle of the side of the pyramids, they had a cinder block with a smooth groove to hold a hardwood cylinder with a groove in it for a rope.

The cylinder, which had olive oil on it to help reduce the friction, would act as a pulley to help with the reversing of the rope’s direction, Blakely stated.

Blakely calculated that with the system, “one person should be able to lift 70 pounds with ease.” His goal for the day was for 5 people to be able to easily pull a weight of around 300 pounds.

The box they built to hold the weights weighed around 60 pounds on its own, and two 40 pound weights were added into the box, bringing it up to 140 pounds for the first pull, and that was pulled up the side with no ease.

The idea that Blakely wanted to prove through this demonstration was that humans would have been able to safely pull these massive, 5000 pound blocks up the side of the pyramid using the pulley system.

This system would have provided a mechanical advantage for the Egyptians, and help add additional proof to the pulley theory and against the ramp theory.

The ramp theory states that the Egyptians used ramps to pull the blocks up, but Blakely presented two issues with that.

“The first is that the ramp would need to be rebuilt everywhere they needed to pull up a block,” Blakely said. “The second is that either the floor would need to be smooth, which would mean no traction for the people, or it is rough for traction, making it impossible to drag the stone. You can’t have both.”

After the initial pull was completed by Greg Blakely, who is Stephen’s son, and Barron Archey, who is married to Greg’s daughter Emily Blakely, they proceeded to add more weight.

An additional 40 pound weight was added, and two men again demonstrated the ease at which they pulled, with both Archey and Greg stating that there wasn’t much strain when it came to pulling it.

When they added a 35 pound weight, an adjustment was made to position the rope lower within the box after their attempt to pull led to the rope grinding against the cinder block piece.

At the weights of 180 pounds and 200 pounds, Archey’s 14-year-old son Isaac Archey joined them for the pull, and would have continue as just the three of them, but Blakely wanted to add a fourth person for safety, so they were then joined by Barron’s 13- year-old son Levi Archey.

Once 245 pounds of weight was added to the box, Stephen Blakely himself was the fifth and final person added to the pull team.

They all continued to pull with relative ease, with the last of the weights bringing the weight total to 275lbs, which became 335lbs when accounting for the box. The pull was a success, bringing it all to the top, before the simple structure collapsed under the weight.

The final pull, which attained Blakely’s goal, was successful, even though it fell apart afterwards. The calculation of the amount people needed to pull the 5,000 pound pyramid stones came up to around 70 people, each of them pulling a weight around roughly 70 pounds.

He said the next step to prove his theory is to do a 25-person pull, and hopes to one day gather 70 people to prove that they are capable of pulling the 5000 pound stone, and that the Egyptians would have been able to do it too.

More info on the Egyptian pulley can be found on egyptianpulley.com. 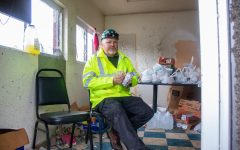