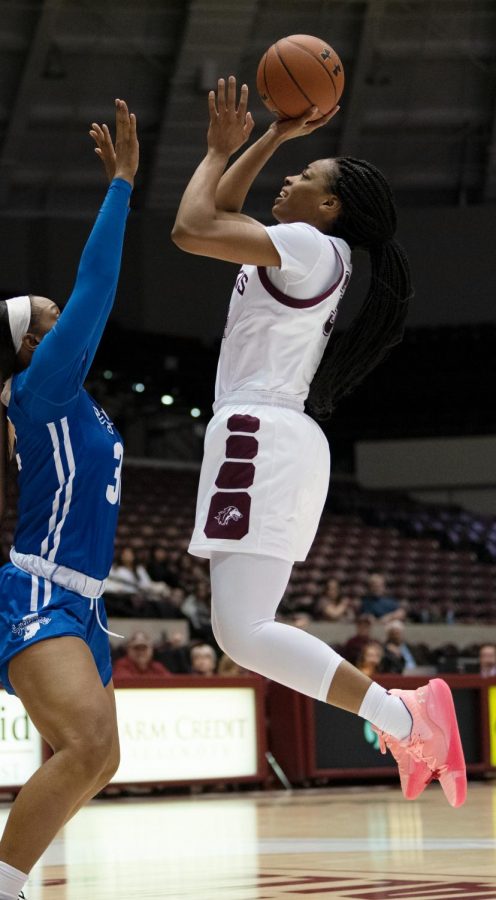 Southern Illinois Saluki number 34 forward, Nicole Martin, jumps for a basket to score against Indiana State Sycamores during the Friday night woman’s basketball game at the SIU Banterra Center. The game ended with SIU at 60 and ISU at 42 on February 21, 2020.

After losing three-straight conference games, SIU regained its confidence with a 60-42 win over the Indiana State Sycamores.

“That was a tough stretch there,” Saluki sophomore guard Paton McCallister said of the losses. “We still have high hopes and are ready to come out strong the rest of the season.”

The Salukis were led by senior forward Nicole Martin, who notched a near double-double performance putting up 17 points and grabbing nine rebounds. McCallister pitched in 12 points behind Martin to contribute to the Southern offensive efforts.

“Nicole… was demanding the ball. Her having that post presence in the paint [takes] the pressure off of everybody else,” Saluki head coach Cindy Stein said. “She had great seals and went after the ball”.

On the other end of the court, junior forward Jamyra McChristine led the Sycamores in scoring with 12 points and three rebounds.

The Salukis started the game with an 8-0 run that featured a three point play by Martin, followed by a three point shot and layup from junior guard Makenzie Silvey.

Indiana State’s freshman forward Adrian Folks stopped the run with a mid-range jumper. A layup from her teammate, McChristine, on the next possession helped to decrease the growing deficit.

A foul called on SIU junior forward Awa Keita allowed McChristine to go to the free throw line where she went 1-for-2 from the stripe. After her free throws, McChristine continued to close the gap with a layup in the paint.

Saluki senior guard Brittney Patrick helped her team to close out the first quarter strong with a 3-point jumper at the buzzer.

The half ended with a pair of free throws from Martin putting SIU up 28-17 at halftime.

“We were only up by 11 for a while [so] making those free throws were especially important,” Martin said.

The Sycamores started the third quarter with a 5-0 run, with a jumper and free throw from junior guard Cece Mayo, followed by a layup from Dean.

SIU bounced back by going  a 5-point run with a layup and free throw from Martin, followed by a  jumper from sophomore guard Payton McCallister.

Sycamore junior guard Marie Hunter broke the run with a layup in the paint followed by a free throw making the score 33-25.

Southern ended the quarter with a layup from Martin assisted by Patrick that gave SIU an eight point lead going into the last quarter of the game.

Saluki momentum in the fourth quarter was fueled by Martin as she went on an individual four point run with two free throws and a layup. Senior guard Kristen Newton followed by knocking down two free throws to give SIU a 49-35 lead.

Southern continued the run with two layups from McCallister that were the result of two steals at the top of the key from Keita.

“I think it was Awa’s defense that made the change in the game,” Stein said. “[Its] got us that lead… When we recruited her she was someone who could make a difference defensively and change a game.

Indiana State struggled to score in the fourth quarter against the Southern defense, which was being led by Keita, who tallied five steals within 12 minutes of play.

In the final seconds of the game, McCallister drained a 3-pointer to seal the win for the Salukis, 60-42.

The Salukis will next take on Evansville at Banterra center on Feb. 23 at 2 p.m.

“The biggest thing with Evansville is they’re a great shooting team, we didn’t play very good defense,” said Stein. “Our defense has to be a lot better. [They’re] definitely a team we can’t underestimate”.