The streak comes to an end: SIU falls to Valpo 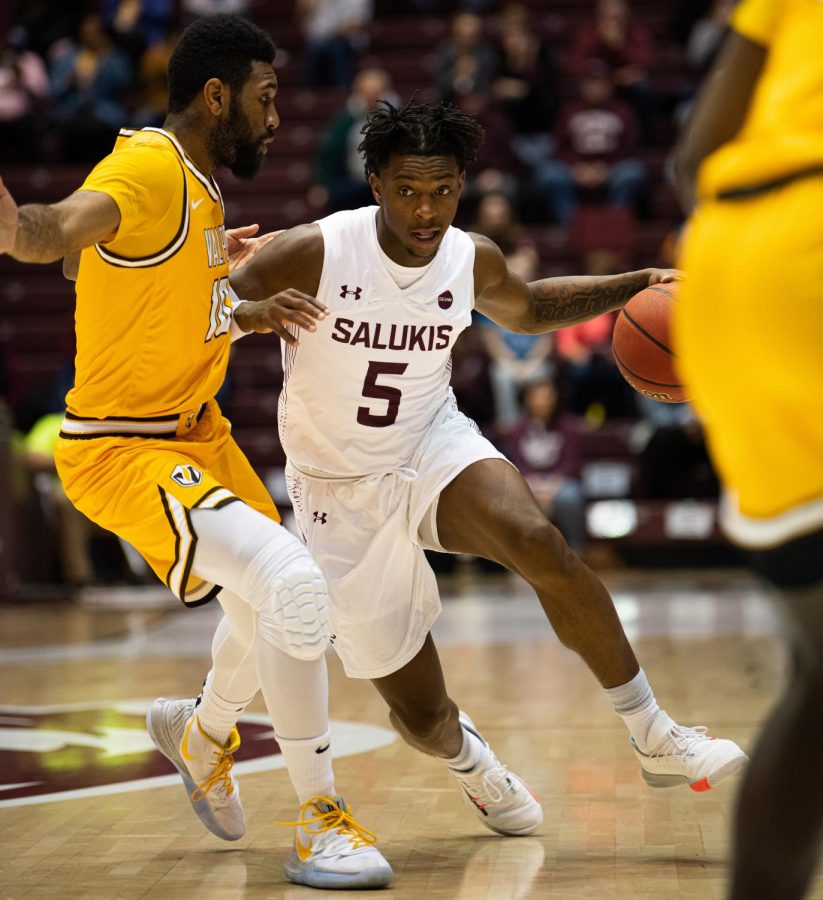 SIU Freshman Lance Jones goes against a Crusader defender during Tuesday’s 63-50 win vs. Valparaiso at the Banterra Center in Carbondale, IL.

It’s said all good things must end and tonight this was true for the Saluki men’s basketball team and its seven-game conference win streak.

The Salukis were defeated by the Valparaiso University Crusaders, 55-38.

“I give all the credit to Valpo,” Saluki head coach Bryan Mullins said. “They played extremely well. They outplayed us [and] they did a great job guarding us all night. We’ve got to play better if we expect to have a successful sweep.”

Valpo, which is currently ranked sixth in the Missouri Valley Conference, took the lead from the beginning and never let SIU back into the game.

After tonight, the Salukis fall into a tie for second place in the MVC with Loyola University Chicago.

This evening, Southern struggled in shooting going 13-for-55 (23.6%) from the field, only having one player in double-digit scoring, senior guard Eric McGill, who scored 13 points.

The Crusaders were 22-for-49 (44.9%) from the field and were led in scoring by freshman forward Ben Krikke (15) and sophomore guard Javon Freeman-Liberty (14).

Valparaiso bested Southern Illinois in nearly every category on the court including rebounding and free throw percentage.

After winning the jump ball, the Crusaders (13-13, 6-7 MVC) took the lead when they went on a 14-8 scoring run against the Salukis (15-11, 9-4 MVC). SIU’s eight points came from two 3-pointers, each of which were shot by freshman guard Lance Jones and McGill, and a layup from freshman forward Marcus Domask.

Southern junior forward Brendon Gooch drained a three point jumper to stop the run, but after this shot the Salukis were unable to score for over seven minutes. During this time, Valpo tallied five more baskets to push their lead to 24-11.

“In the first half, the ball stuck too much and it wasn’t moving like it should’ve been,” Mullins said. “Obviously missing some shots, some lay ups, and some three’s early on kind of took us out of the rhythm. We could never just string together three or four minutes of good basketball.”

In the final three minutes of the period, SIU was able to put five more points on the board, but the Crusaders had the final say in the half when they scored two back-to-back jumpers with one being from Freeman-Liberty.

At halftime, Southern trailed by more than 10 points with the score at 28-16.

Graduate student center Barret Benson got scoring started in the second half with a layup under the basket. Benson’s basket was followed by two others from Domask and McGill.

This trio scored all but two of SIU’s 22 second half points. In this half, Valpo outscored Southern 27-22 and this difference combined with their considerable lead from the previous period allowed the Crusaders to take the win at 55-38.

“I thought the guys got good shots today […],” Mullins said. “It’s got to be all ten or eleven guys contributing if we’re going to win, it can’t just be Marcus, or Barret, or Eric. We need everyone.”

Tonight, the Salukis shot under their normal averages, but were still able to hold the Crusaders to under 60 points.

After this evening’s loss, SIU will return home to the Banterra Center to face-off against the Bradley University Braves. Tip-off is set for Saturday at 1 p.m.