The man behind the mascot: Q&A with the elusive Gray Dawg 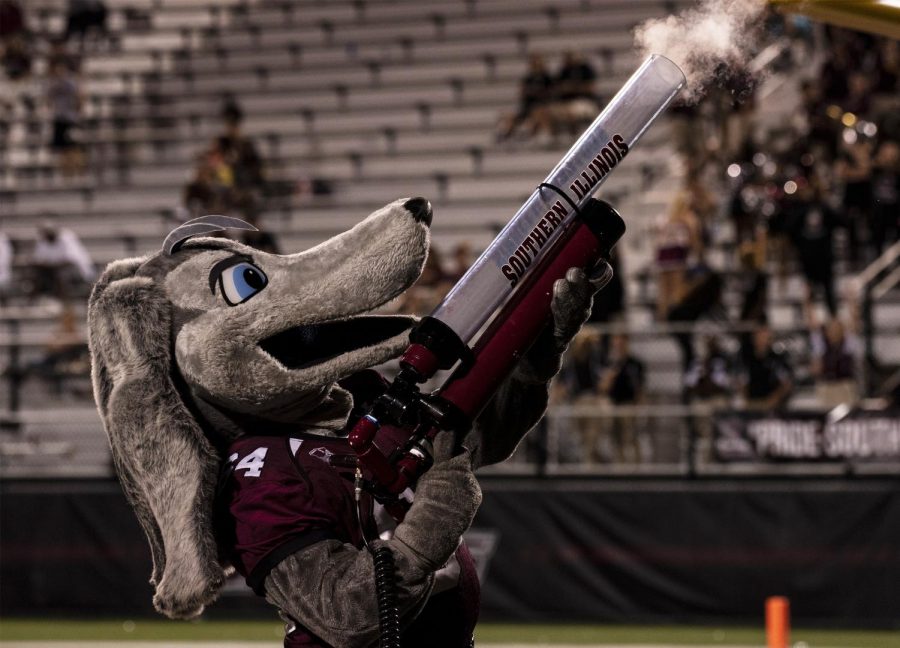 Ever since my freshman year as a Saluki, I’ve wondered about the elusive figure that is Gray Dawg.

His dynamic is similar to that of a superhero, seen by the public in masked uniform as a grand figure but he walks among us in secret every day as a regular person.

I came face-to-face with SIU’s very own version of Clark Kent and while I cannot reveal his identity, I can share with you the answers he gave to some of the burning questions I had concerning his job.

Daily Egyptian: Do you ever tell people who you are?

“I’ve heard conversations about Gray Dawg but I mostly keep my identity a secret,” Gray Dawg said. “Sometimes people put two-and-two together but I don’t publicly say it and I just let them figure it out on their own if they do, if not, that’s just the magic of the mascot.”

DE: What are some problems you face when inside of the suit?

“When you start off in the suit, it gets very hot but you really get used to it, so as time goes by it doesn’t bother you as much,” Gray Dawg said.

Gray Dawg said the biggest problem he faces inside the suit is having proper mobility when performing a dance number.

“I had to learn a certain dance number and it was difficult to do because of the tricky footwork and the tail got in the way a lot,” Gray Dawg said.

Something that is surprisingly non-problematic for the masked man is the cleanliness of his costume, he said the uniform is cleaned after every game he attends.

“We keep [the suit] very sanitized throughout the season, so it’s always clean,” Gray Dawg said.

DE: What is your favorite thing about being Gray Dawg?

“The interactions with little kids are my favorite,” Gray Dawg said. “Just seeing them completely light up when they see you and want to hug you and high-five you. I just want to inspire the little kids: […] I love every minute of it.”

While Gray Dawg has many adoring fans, there have been some who are not too fond of the mascot, sometimes rejecting his friendly gestures. Gray Dawg said when these fans don’t want to high five him or engage, he keeps moving and focuses his attention onto the next fan willing to interact with him.

DE: What is your favorite sporting event to work as Gray Dawg?

“I enjoy all of the sports and I can’t really pick just one because each one brings a unique experience and aspect,” Gray Dawg said. “It’s not really one thing or the other because each one has its own advantages and challenges.”

At each game he attends, he is required to take pictures for marketing and with fans.

“I would have to say that the amount of pictures I take really just depends on the game,” Gray Dawg said. “On average, at the busy games, I take at least a couple thousand photos.”

DE: What kinds of things do you go over at practice with your coach?

“We mainly go over how to get more energetic and where to stand on the court for certain things,” Gray Dawg said. “At the beginning of basketball games cheer is out on the court and I don’t want to interfere with the cheerleaders and they don’t want to end up interfering with me when I’m moving around. So, it’s mostly going over where to stand during certain parts of the game so that everyone’s all safe out there.”

Just like the athletes, Gray Dawg said he practices three hours before the game but when he’s not practicing, he’s thinking of new things to do to get fans involved.

DE: Does the anonymity of the costume make you more confident?

“It definitely helps,” Gray Dawg said. “I’ve been mascoting pretty much my entire life since middle school. My confidence over the years has really grown while I’m inside the suit. When I’m acting like a goofball out on the court, that’s not exactly me, but I’m just energetic always […] whatever it takes to get the crowd going.”

DE: What is the toughest part of your job?

“I would have to say the toughest part of the jobs is getting the fans going when we’re down by quite a few points,” Gray Dawg said. “They’re usually sitting there like, “Okay, okay.” and I have to rile them up and really get them going.”

DE: Are there specific rules you have to follow on the job?

There are a lot of rules for the masked hero to follow, many of which are set in place by the NCAA. One of these rules is the prohibition of trampoline acts by mascots. Gray Dawg said rules from the university can be as simple as following the instructions for a certain promotion occurring at the Banterra Center.

Another rule he must follow requires him not to speak during games and Gray Dawg said it can be tough for him at times.

“A lot of times I want to yell, especially when we’re up ahead and winning,” Gray Dawg said. “It’s challenging, but it’s something you get used to. When you step on the court, it’s game time and you kind of shut off your mouth without even thinking about it.”

DE: Have you ever run into problems with other mascots?

“I’ve worked with plenty of mascots across the Missouri Valley and a few professional mascots,” Gray Dawg said. “It’s in the family and we really understand what each other go through as a mascot and so we just have each other’s backs a lot of the time. I still keep in contact with a lot of them.”

DE: Was it hard to get into Gray Dawg’s character when you first started this job?

“It was a lot different because the mascot I had been previously was different,” Gray Dawg said. “Each mascot brings its own challenges when you start off in it and it kind of grows on you when you start moving forward. You create your own character and each mascot is unique to that specific person. Not one person is going to do the exact same thing as the other.”

After our discussion, I learned Gray Dawg is currently enrolled in graduate school at SIU and that he has been the mascot for Saluki athletics for five years.

Gray Dawg walks among us as a regular student by day, but at night he transforms into the mystical figure that we all know and love.

If you pay close enough attention you may be able to discover his true identity but until then, make sure to give him plenty of high fives when you attend games.