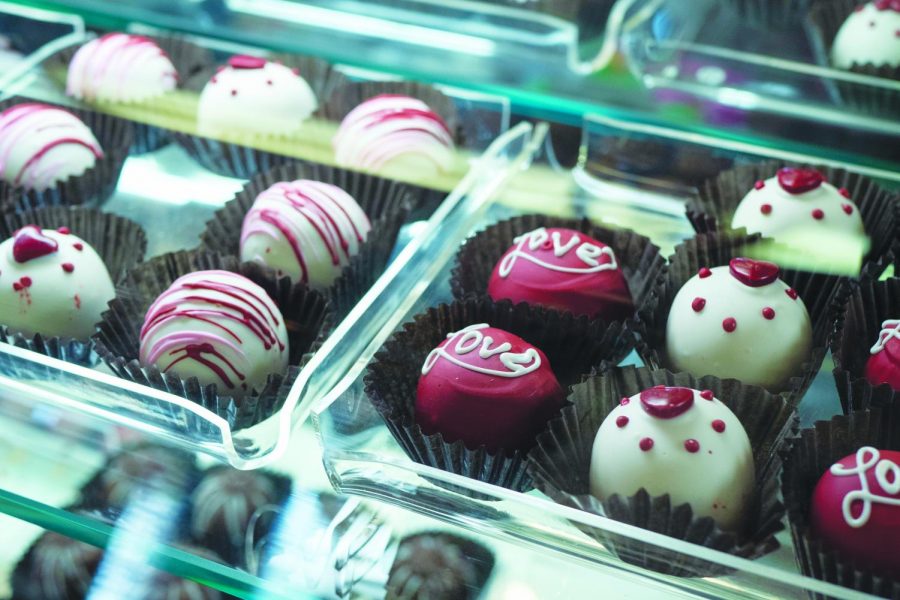 Valentine’s Day is approaching and many people, including myself, are dreading the fact they don’t have anyone to celebrate with.

However, one thing that I do look forward to is the Valentine’s Day themed candy and boy do I have a lot to get through!

There’s a sweet out there wrapped in red, white or pink and in the shape of a heart for almost any preference, but which themed candies are the most popular?

I did a quick search online and found candystore.com’s list of each U.S. state’s favorite Valentine’s day candy.

While each state has their preference, I’ve gotta say I highly disagree with some of these rankings and would like to dispute them with my own list.

Here, I will definitively rank each of these candies, seven being the worst and one being the best.

I have to say, I definitely agree with the list that candy necklaces deserve to be last place.

My question is why did they make the list at all? Candy necklaces are most popular in only one state, Alabama, and I can’t fathom how they made it to the top of their list.

Yes, the idea of wearing your snack can be cute, but when it comes down to it, the ideal cuteness doesn’t hold up to the reality of actually eating these abominations.

Not only is the candy itself chalky and flavorless, but once you’ve started eating the edible jewelry, you’re left with a sticky, slobbery string! Who wants to keep something that disgusting around their neck, even for the sake of finishing off that last morsel of sugar?

If I’m going to wear a necklace, it won’t be for the purpose of consumption.

Alabama, I have to disapprove of your favorite Valentine’s Day candy and rank it last in this definitive list for sheer lack of flavor and a questionable design.

Chocolate hearts are the favorite candy of Maine and Nebraska, and they’re a bit “meh.” They’re usually not bad but they lack creativity and high quality chocolate.

These candies are reliable, and they look cute wrapped up in their pink, red and silver foil, but the quality of chocolate is usually lacking.

There’s really not much to say about these; they’re pretty boring which is why they’ve ranked number six on my list and candystore.com’s list.

I feel like conversation hearts are probably one of the most recognizable Valentine’s Day candy out there considering they’re the most popular candy in 19 states including Michigan, Missouri and Tennessee.

With the sweet words of love and the cute colorful designs, they’re definitely a staple of the holiday but unfortunately, conversation hearts also have their shortcomings.

Similar to the candy necklace, conversation hearts have no flavor, and if there is flavor, it’s pretty gross.

While I love the idea of writing a little message and presenting the words of love to a significant other, actually eating the candy is the other half of the fun!

Sorry to the 19 states that pushed these iconic candies to the top of the list, but conversation hearts are ranking at a measly five.

Chocolate roses are another Valentine’s Day staple, but are only favored by six different states including Illinois, Kentucky and New Mexico.

I really like the idea of chocolate roses and the aesthetic is spot on! The only problem is the chocolate is usually a lower quality so the taste isn’t quite there.

The design is great and I love the shiny red foil which can be reshaped after eating the chocolate and the green stem that could definitely be useful for a future art project.

No one would be upset getting a chocolate rose at the end of date night, and I would even prefer the edible chocolate one over the edible real one, which tastes like perfume.

Chocolate roses are reliably “Valentine’s Day,” which is why they rank right in the middle at number four of my list.

M&M’s are loved most by four states –– Idaho, Iowa, Maryland and Pennsylvania –– ranking them at five on the original list.

While M&M’s are not my favorite candy, they’re reliable and they consistently taste better than the cheap chocolate hearts.

They’re still lacking in creativity since Valentine’s day themed M&M’s are usually just colored red, pink, white and other festive colors, but they’re old and reliable, ranking a little higher than middle of the list at number three.

I have to say, I was a bit surprised to see that Hershey Kisses only ranked at number four on candystore.com’s list with five states, including Arkansas, Delaware and Wisconsin, choosing them as their favorite.

Like M&M’s, Hershey Kisses are old and reliable and themed candies are available for each holiday season.

Often times the only differences are the foil wrapping the outside of the signature dollop shape but these kisses are almost as nostalgic as a wet kiss on the cheek from grandma.

It’s really hard to go wrong with signature Hershey’s chocolate and the Valentine’s Day theme continues with the little messages written on the wrappers.

Conversation hearts, take some notes: you can send words of love to someone and still be enjoyable to eat. Hershey Kisses beat you at your own game, which makes them the runner up for best Valentine’s Day candy.

At last we’ve come to the number one spot, but heart-shaped boxes of chocolate ranked only number two on candystore.com’s list. Thirteen states, including Alaska, Indiana and Ohio, chose it as their favorite candy.

This candy deserves the number one spot for many reasons, the first being the amount of options there are!

You can choose from a variety of different kinds of chocolate or candy for every taste, how much you want — from a bit of regret to feeling sick — and if you don’t know someone well, it’s always a safe option, to give them options.

I could rave and rave about these boxes of yumminess for pages, but I’ll let the fact they earned the highest spot on the list speak for itself.

You can agree or disagree with me on my definitive ranking of Valentine’s Day candies and maybe you have your own ranking as well but I think everyone can agree candy necklaces are an abomination.