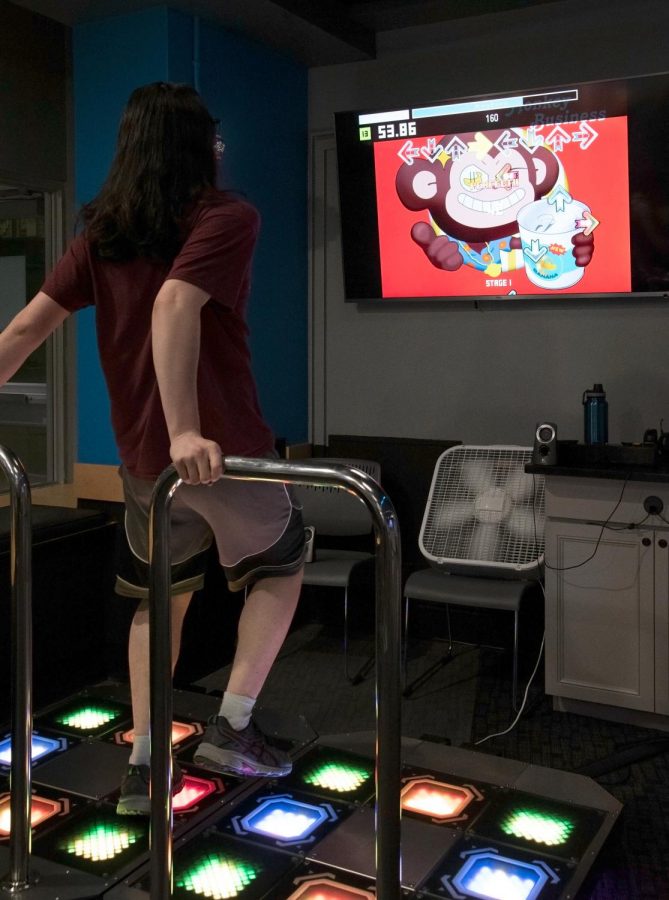 Tyler Knupp, Junior, is part of the SIU Esports Rhythm Club practicing using both sides at once at the Student Center Esports Arena on Monday, February 10, 2020.

The Esports Arena has one semester under its belt and some new additions have given the students a competitive edge. SIU administration and the Esports club review what updates were made and what to expect from the arena in the future.

See more: (SIU Esports Arena will be open for Dawg’s Night Out)

The Esports Club is technically a sports club associated with the rec center. Esports has dedicated games like “Overwatch,” “League of Legends” and “Dance Dance Revolution” that people play with game heads.

A game head is a student that runs events for a specific game.

The arena opened in fall 2019 with all the amenities teams need to compete. It has 12 state-of-the-art Alienware computers with headsets, keyboards, mice and new 144 hertz refresh rate monitors.

A 144hz monitor is specifically designed to give a player a better edge when competing. These monitors have a faster screen refresh rate compared to the 4k monitors that were in the arena last semester.

A faster refresh rate allows the computer to run the game at more than 60 frames per second which allows the player to see more of what is on screen.

Brandon Isom, a senior studying Radio, TV and Digital Media and “Overwatch” Gamehead, said with the new monitors, more players will be able to meet in the arena for practices.

Isom said for “Overwatch” the spring semester will be their full season in Tespa. The fall was a pre-season. Tespa is a collegiate Esports organization that is based out of the Blizzard headquarters. Blizzard is the company that created the game “Overwatch.”

“Blizzard goes through them [Tespa] for most of their major collegiate Esports,” Isom said. “We’ll be in the ‘Overwatch’ Collegiate Championships circuit.”

Isom said in their preseason they played local teams including Southeastern Missouri State University and from teams across the country.

“The bowling alley and arena would close at 8 and our games would go to 9:30 sometimes,” Isom said.

Brandon Macier, the marketing associate director at the Student Center, was the team’s right hand man and was able to extend the hours of the arena so the team could finish games, Isom said.

“‘Overwatch’ has been awesome, those guys are great,” Macier said. “Seeing students that are that into it and wanting to improve the program – anything we can do – we’re going to do in a heartbeat”

Isom said he’s excited to see how this semester goes and is confident the team will do well in the circuit.

The “Overwatch” team isn’t the only one getting the most out of the new arena.

Members of the “Dance Dance Revolution” club also utilize the arena, mainly because of the new dance pads.

Nathan Diazleal, a junior studying automotive technology and mechanical engineering and Gamehead of Rhythm Club, said before the arena they would meet at the rec center and they used dance pads from 2005.

Now they are using new StepMania X dance pads that are compatible with the computers used in the arena.

“They’re very high tech, each arrow can have its specific sensitivity changed, which can avoid some maintenance,” Diazleal said. “With other DDR machines you can’t change the sensitivity.”

Diazleal said the group is able to meet for longer periods of time since the arena opened up. Before, they would meet until the rec center would close and get penalized if they didn’t clean up quick enough.

Rhythm club now meets Mondays and Wednesdays from 6 p.m. to 9 p.m. Diazleal said sometimes they will meet on Saturdays from 1 p.m. to 6 p.m too.

Macier said last semester they partnered with students for a minor in game animation and they got to show their final projects in the arena. He said anything digitally based and could utilize that space is more than welcome to.

Macier and associate director, Kent Epplin, said they want to incorporate all the majors that can use the arena for learning.

“Anything from kinesiology to occupational therapy because right now a lot of [professional] gaming competitions they have on-sight therapists to massage your arms and show you how to stretch,” Macier said. “To make sure you aren’t getting carpal tunnel.”

The group only uses the Nintendo Switch and the Nintendo Gamecube, Epplin said. Administration isn’t able to download the software needed to be a part of the SIU Esports Arena but they are working at it.