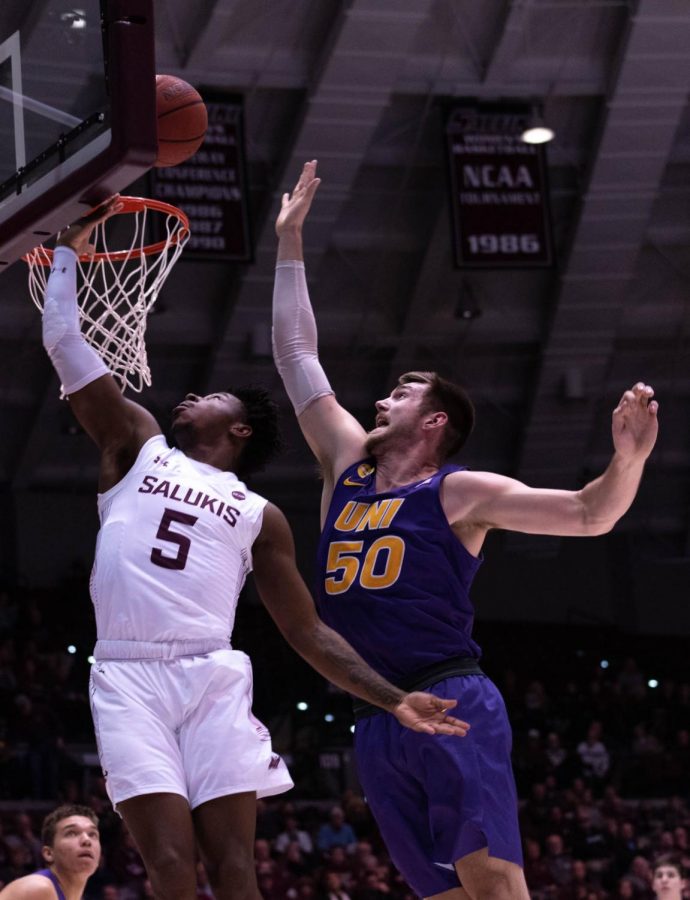 After defeating the top teams in the conference, it was surprising to see the Saluki men’s basketball team struggling to win against the University of Evansville, which is currently ranked last in the MVC and has yet to win a conference matchup.

Both teams battled to stay ahead, but it was Southern who emerged with the 64-60 victory after the game was sent into overtime.

Freshman guards Marcus Domask and Lance Jones led the way for SIU in scoring. Domask tallied 22 points on the night, while Jones chipped in 15.

In a very low-scoring first half of play, the Purple Aces (9-15, 0-11 MVC) took an early 8-2 lead over Southern, draining two 3-pointers and earning a layup from an offensive put back.

SIU’s first points of the game came from a freshman forward Marcus Domask layup at the 16 minute mark.

After fighting to relieve the deficit, the Salukis were finally able to tie the game at 10-10 with a three point jumper from freshman guard Lance Jones. On the next play, a driving layup from Domask gave Southern its first lead of the game at 12-10.

Play was close for the remainder of the period, but SIU was able to outscore Evansville 12-10 in the final minutes to enter halftime with a 24-22 lead.

In the start of the second period, the Salukis were able to extend their lead with the help of two Jones layups and a 3-pointer and layup from Domask along with two other SIU layups.

A pair of free throws from Domask gave Southern its largest lead of the night at 39-31 with 13 minutes left to play.

Riley scored 20 points in the second half alone to keep Evansville afloat. At the end of the night Riley was the top scorer for the Purple Aces finishing with 24 points and seven rebounds.

With 30 seconds left to play, the Salukis held a four point lead, but a pair of free throws from Riley would cut it down to two.

After a Southern turnover, the Purple Aces took possession of the ball and Riley was able to score and tie the game before time expired sending play into overtime.

In the overtime period, SIU outscored Evansville 5-3 with four of the baskets coming from Jones.

After dominating the extra period, the Salukis clenched a 64-60 win over the Purple Aces.

Next, Southern will return to Carbondale to play at Banterra Center on Saturday, Feb. 8 against the Missouri State University Bears. Tip-off is set for 7 p.m.