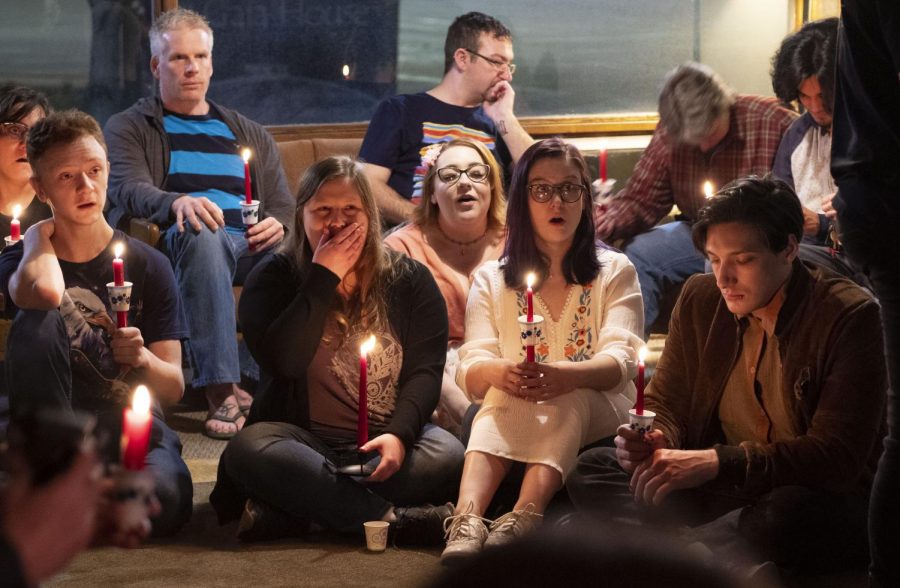 Attendees participate in a chant to the goddess Brigid during the Imbolc ceremony on Saturday, Feb. 1 at the Gaia House in Carbondale. Brigid is the goddess of healing, fertility and creative inspiration.

Over 50 people crowded into the Gaia house on Saturday carrying red candles to perform a healing ritual in observance of Imbolc.

Imbolc is a celebration of the coming of spring and return of light according to Tara Nelsen, co-founder of the Southern Illinois Pagan Alliance.

Paganism is a very old religion and the belief system was structured when people were living off the land and if someone’s crops failed, if their animals died, they died too, Nelsen said.

Honoring changes in nature is very important in the pagan system and there is a “wheel of the year” that contains eight major celebrations that SIPA observes, Nelsen said.

“Those eight celebrations can be broken down into the solstices and equinoxes,” Nelsen said. “Then in between them are two ‘lesser’ sabbats and that’s what this one is.”

Before the ritual began, everyone gathered outside to be “smudged”  and participants laid items on the altar that they wanted to be charged with healing energy.  Smudging is a process where sage smoke is waved over the body or over a space to purify it.

To begin, Samuel Duncan, a pagan from Paducah Kentucky and leader of the ritual, would call out to Brigid while participants repeated his chant.

Imbolc, Brigid, we call to you.

Imbolc, Brigid, we attune to you.

Imbolc, Brigid, we celebrate you.

Keeper of the sacred fire we invite you in.

Cassandra Bolte, who was acting as Brigid for the ritual, lit a sacred red candle that was on the altar with Brigid’s flame.

This candle has been used by SIPA in rituals for over 13 years and is two degrees separated from Brigid’s flame in Ireland, Nelsen said.

After this, participants positioned in the north, east, west and south of the room called out to Brigid in prayer. Everyone around the room lit their red candles off of Brigid’s flame as the group continued to chant to the goddess.

“Holy water sacred flame, Bridgid we invoke your name,” the group sang until the last candle was lit. “Bless our hands our heads our hearts source of healing, song and art.”

The items on the altar were blessed and milk was blessed and offered to Brigid. Bolte and Duncan went around the room and filled everyone’s cups with milk and everyone drank together and then blessed the earth.

This was the first ritual Duncan led; he said he wanted it to be centered around healing.

“A lot of people, myself included, start to feel really blah around this time of year,” Duncan said. “The winter and all that, it gets down gets you down, so I wanted to make it a really healing centric ritual so that’s what we were doing with the milk, we blessed the milk and objects on the altar that way everyone had a little bit of healing to take home with them.”

Duncan said at the end of the ritual, the group blessed the earth in the wake of climate change, deforestation and desertification.

“Once it was over with, I felt very calm and at ease and I hope that everybody takes a little bit of that away with them,” Duncan said.

Kimberly Brink, who has been a member of SIPA since 1999 when she was a student at SIU, said whether you call it Imbolc or Candlemas or any of the dozens of other names that this holiday has, it carries a lot of the same associations through a variety of pagan dynamics.

Monica Thomas has been a member of SIPA for almost a year and said her faith means everything to her.

Thomas said she had always been a solitary witch and did not find her path until 2011. She said she had never found anyone else like her until she discovered SIPA.

“I’ve been surrounded by very traditional Christians and so whenever I moved here […] I found SIPA and it completely changed my life for the greater good,” Thomas said.

Bolte said his faith is a way he can release stress and become more in tune with who he wants to be.

“I feel like I need community in my life or like a way that I can change what I want about myself and just self growth and stuff,” Bolte said.

Brink said for her, the ritual was all about community.

Nelsen said people shouldn’t be afraid to reach out to, or become involved with SIPA.

“We are so open and accommodating and welcoming,” Nelsen said. “I can guarantee you any kind of personal problems you think you have, we have 10 people here that have the same kinds of problems so we are really really open.”

SIPA can be reached on their Facebook page which can be found here.