Alum and activist returns to SIU for TED Talk: Q&A with Travis Washington 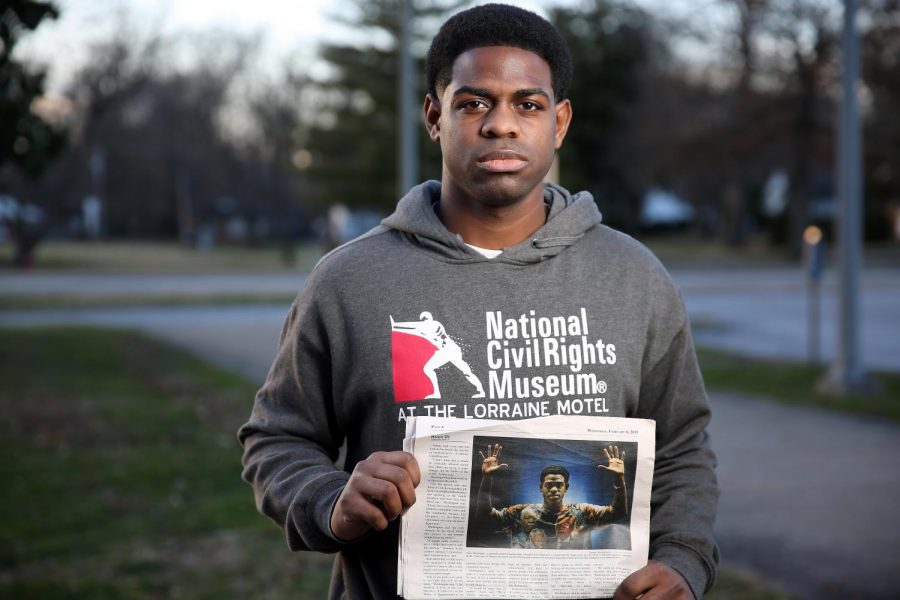 Travis Washington of Flossmoor, IL holds a Daily Egyptian news article, which ran on 02/06/19 and featured Washington, on the SIU campus on Saturday, January 18, 2020, Carbondale, Illinois. Washington, 25, graduated with his MA degree in Education Administration last May from the SIU graduate program, and has been the force behind the 'Hands Up Act', a piece of legislation that would make it illegal for police officers to shoot someone if the person is found to be unarmed.

The Hands Up Act is a proposed bill that would make it illegal for police officers to shoot unarmed citizens. If an officer were to shoot an unarmed citizen, they would have to serve a 15 year sentence.

“After the Hands Up article came out, I started doing more traveling. I got an internship with the US Senate office. I was invited to give a speech at College of Democrats of America, where there were congressmen and attorney generals there.”

Washington was invited to St. Louis by the Michael Brown Foundation and gave a speech there, he said. He met Michael Brown’s and Tamir Rice’s mother, who are both huge supporters of the Hands Up Act.

“I don’t want to say it was a dividing moment, but that was a moment where I was like ‘I’m headed in the right direction. I’m hitting the right people.’ Since then, I have received more than 400,000 signatures and I made it into the New York Times. I’ve had six governors contact me.”

DE: Where all have you been, state wise?

“I went to Lorraine Motel, where Dr. King died; they were one of the first few supporters, and she told me just to drop off my newspaper of the Hands Up Act and they told me to keep going.”

Washington has also traveled to New Orleans and Memphis to speak about the Hands Up Act, he said.

DE: Did SIUC invite you here, or did you ask? How did you get the TED Talk set up?

“There was a tryout. My friend, Mary, told me to apply for it and I just put my name in it and I was blessed enough to be selected. It was a great opportunity.”

DE: When did you first get the idea to create the Hands Up Act?

Washington said he came up with the idea two years ago and was going to wait until he became a senator or congressman to pass the Hands Up Act but Joseph Brown, an SIU professor specializing in Africana Studies, asked him why he needed to wait.

DE: What are your next steps, what do you plan on doing now?

“My plan is to focus on getting to a million signatures, getting my hearing with the United Nations Human Rights Council. I want the world to know how police shootings of unarmed citizens is unacceptable.”

Washington believes shooting unarmed citizens and police brutality not only causes trauma but destroy community relations, he said. Washington said he wants to give his hearing with the House of Representatives and wants the world to know who he is.

DE: Do you think there’s enough diversity at SIU?

“I feel that all universities need to adjust their demographic change. There were more brown, black and mixed children born in the United States in 2016 than white children, so the United States college of education as a whole, we all need to start adjusting to new groups coming in.”

DE: What is your favorite thing about SIU?

Washington said that SIU is where he received his masters degree in education, met his best friends, and Asia Easter, his fiance.

DE: How did you meet your fiance?

“I met her behind a desk at U-Hall. When I was a senior she was a freshman, but it was my last year at grad school and I was working my internship with the US senate office. I saw her behind a desk and that’s when I started talking to her.”

When Washington first met Ester, he said he showed her his movie collection and on their first date he took her to see Detective Pikachu.

“I’ll never forget, I would stay up to 2 a.m. with her on her shift, I let her drive my car, I love that woman. She’s my best friend.”

Washington said he wants to take Ester everywhere and if he goes to South Africa or speaks for the United Nations or House of Representatives, he wants her to come along, he said.

DE: Who were your mentors and heroes?

“Father Brown, my dad, Nelson Mandela, Dr. [Saran] Donahoo, professor in higher education at SIU,  and Kofi Annan. Don’t forget my dad, my dad was like the main one who changed everything.”

Washington said his favorite heroes are Robin, Nightwing and Yu-Gi-Oh! and he would not be here if it were not for them, he said.

“Those superheroes who stood up against the world, what they did was they stepped up to the challenge when nobody else could. I always wanted that moment where I step up and the world is depending on me. There are a lot of oppressed people who are scared, who are depending on me.”

Since he was in first grade, Washington said he felt like he was going to do something very special and now he is doing it, he said.

“Star Wars: The Clone Wars, Naruto, Yu-Gi-Oh, Teen Titans, those were the four shows that prepared me to do the Hands Up Act. They taught me the most important thing is forgiveness. Forgiveness is the only way I can get all of this done.”

This movement is about uplifting people who feel scared, who feel like they can’t go to the police, or feel trauma from these unarmed shootings, he said.

Travis Washington’s Hands Up Act petition can be found here.