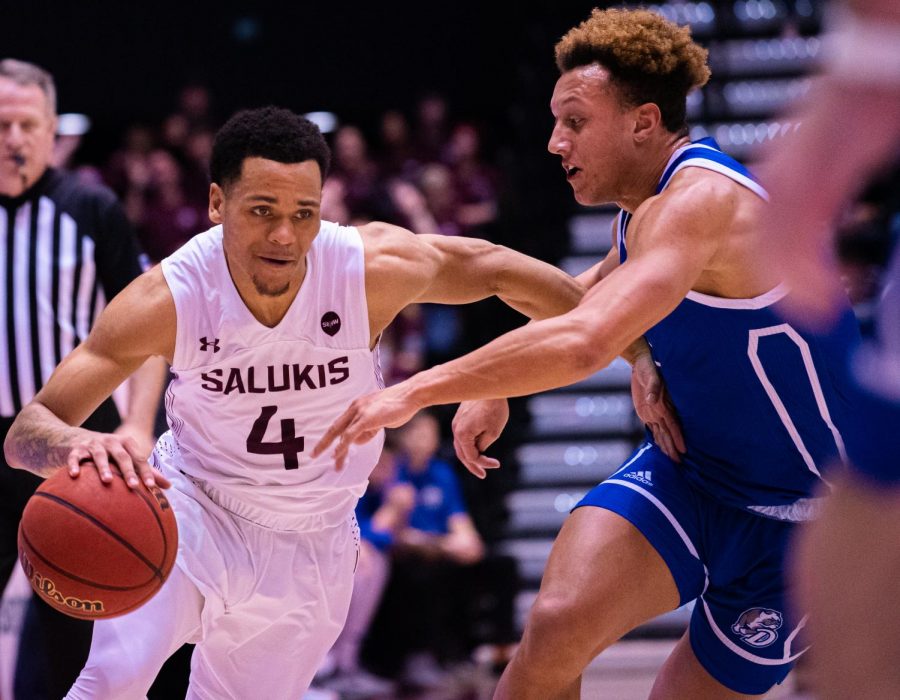 Salukis senior guard Eric McGill goes against a Bulldog defender during SIU's 66-49 win over Drake on Sunday, Jan. 19, 2020 at the Banterra Center.

Southern Illinois men’s basketball didn’t disappoint a crowd of 4,337 at Banterra Center during their eighth-straight win on their home floor.

“We’re proud of our group. I thought for 40 minutes, especially on the defensive side of the ball, they were really locked in and they really guarded as a team,” Saluki head coach Bryan Mullins said. “Everyone had each other’s back today, and that was the biggest thing, especially in our transition defense.”

“I thought they did a good job at taking us out of some things that we like to do, and again, as I said, they were well prepared and executed it perfectly,” DeVries said.

Graduate student Barret Benson had a double-double in his best game so far as a Saluki with a career-high 18 points as well as 10 rebounds.

“He’s a huge piece of the team, and when he can score with his back to the basket, it just gives another dynamic to our offense,” Mullins said. “He was really aggressive from the start of the game, and defensively, he did a really good job taking up the paint.”

SIU had two other athletes in double-digits on the offensive end, including freshman guard Lance Jones, who finished with 12 points and nine rebounds, and Marcus Domask, who had 10 points and five rebounds.

Drake’s 17 total fouls had Southern in the bonus in the first half and double-bonus in the second.

“That was one of our game goals – to get to the free throw line,” Mullins said. “If we can get to the paint and get paint touches, it’s not always going to translate to baskets but it collapses the defense and it gives our offense some open shots [too].”

After the half, Southern’s lead was reduced to just three points following a dunk from sophomore forward Liam Robbins and a 3-pointer by senior guard Anthony Murphy.

“I thought we came out of the locker room to start the second half with a little more purpose,” said Bulldog head coach Darren DeVries.

McGill helped Southern extend their lead with an eight-point scoring run individually on three consecutive trips down the floor.

“I feel like I’m streaky. I feel like if I make one, I’m going to make the next one,” McGill said. “That [run] was huge for us. After that, I felt like my team found some energy and we just took off from there.”

Benson followed with a nine-point run of his own, including a 3-point basket, two layups and two free throws.

“We’re a lot better team when Barret gets going,” McGill said. “When he plays like that, I feel like we have a great chance to beat anybody.”

For the Bulldogs, Robbins finished with 17 points and 10 rebounds in 21 minutes of play.

Murphy was Drake’s only other athlete in double-digits scoring-wise, finishing with 10 points and five rebounds as well.

The Salukis take their home floor again on Jan. 22 against University of Northern Iowa.