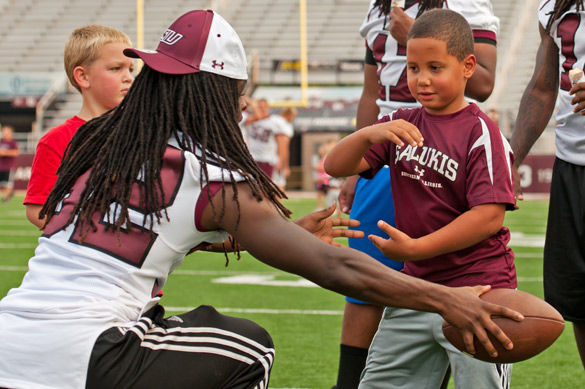 Coaches, players and hundreds of fans from all ages filled Saluki Stadium Thursday for Saluki Fan Fest. Attendees enjoyed a night of socializing, eating ice cream and receiving autographs from their favorite athletes.

The third annual event gave fans the opportunity to visit Saluki Stadium, walk on the field and interact with the 2013 Saluki football team. Players, coaches, cheerleaders, Shakers and mascots greeted the fans for a host of activities the whole family could take part in.

Coach Dale Lennon said it’s fun to greet fans and interact with the community, and it gives the players an opportunity to make an impact on the kids who look up to them.

Senior quarterback Kory Faulkner said any time the team is given a chance to interact with fans in the community, it is incredible and is something the team doesn’t take for granted.

“(The fans) get to come watch us on Saturdays and they don’t really get to interact with us, so when you can get a little kid to come out here and be able to get your autograph and talk to you is great,” Faulkner said. “Maybe when they’re in our shoes one day it’ll give them the mentality that they want to give back to little kids.”

Lisa Nagle, from Carterville, brought her grandson Jackson, 4, to Fan Fest and said they have the season ticket family package to attend all the SIU football home games. Nagle said she comes to Fan Fest for her grandchildren because she said she enjoys them to see the team in person.

Junior tight end MyCole Pruitt said another aspect to Fan Fest is the presence of the alumni who attend all the home games. Pruitt said he likes to talk to alumni to let them know the team appreciates them for all their contributions to the program.

“It’s a lot of alumni out here that gives a lot to the program,” he said. “It’s good to come out here and talk to them, and let them know that we appreciate everything they are doing.”

Scott Luttenbacher, from Carterville, said he and his son Jaron have been to the Fan Fest for all three years and have been season ticket holders for four years.

“There’s a lot of neat things to do, the kids like getting autographs, and doing the activities so it’s just something we like doing every year,” Luttenbacher said.

Jaron, 9, said he likes coming to Fan Fest because he gets to receive autographs and play in the inflatable obstacle courses. He also said he enjoys getting to talk to his favorite football players.

Jaron said he thinks the Salukis will have a good team this year. As for his father, he also has high expectations for the Salukis.

“They’re going to be good this year,” Luttenbacher said. “We’ll find out the first week after we beat Illinois.”