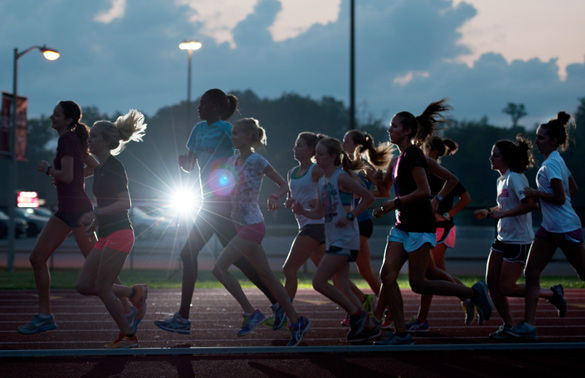 Both the men’s and women’s cross country teams enter the 2013 season with high expectations from the coaches in the Missouri Valley Conference.

In a Monday press release by the Missouri Valley Conference, the men’s team was picked to win the conference for the second year in a row, while the women were ranked third. The men received five of the eight first-place votes, while Indiana State received the other three.

In the women’s poll, Illinois State took nine of the ten first-place votes with SIU getting one vote. The newest member of the conference, Loyola, was picked third in the men’s poll and second in the women’s.

Head coach Matt Sparks said being picked first on the men’s side is nice, but said the team still has to produce that effort.

One runner who shows promise is senior Brian Dixon, SIU’s lone athlete in the NCAA Championship. Dixon finished in the top seven in four of the five meets that took place before the National Championship. He said nationals were a good experience, but he didn’t finish as well as he hoped.

Dixon said the season isn’t going to be a breeze, but his team already has the mindset to win the conference again.

“I saw (the poll) on Twitter, and before I saw it, I thought we were going to win,” Dixon said.

Senior Zach Dahleen said he ran about 70 miles per week during the summer. Dahleen had top three finishes in five events during the 2012 season.

Sparks said some of the men’s runners log between 80-90 miles a week, while some women run about 60-70 miles a week.

Dahleen said the polls don’t change his thought process going into the season.

“Whatever we were (ranked), you go in the mindset to win, and we’ve done that every year since I’ve been here,” Dahleen said.

Junior Sadie Darnell said she doesn’t mind the women being picked third in the rankings.

“I kind of like being the underdog in some ways, just because I know we can do better than that,” Darnell said.

Gibson, a junior, said she has high hopes for her team this season.

“I think our team has really grown a lot this year. We’re all a lot stronger,” Gibson said. “I have really high expectations for the whole team.”

Sparks said he is looking for the women to compete for a conference championship, something SIU hasn’t accomplished in over two decades. With Illinois State returning their top seven runners, Sparks said it would be tough.

“The women’s team hasn’t won a conference title since 1992,” Sparks said. “We would like to challenge for one of those.”

Sparks said with all of the training the team goes through, it is important to know how to run right.

“Ninety-five percent of it is running; the other 5 percent is weight room and nutrition and some of that is more important from individual to individual,” Sparks said.

Dahleen said his team has what it takes to take home another conference championship.

“We have the talent. We just need to run consistently and train how we’re supposed to and the results will show,” Dahleen said.

The men’s and women’s cross country teams will host the Aug. 30 Saluki Early Bird in a tune-up meet before the Sept. 6 EIU Walt Crawford Open in Charleston.