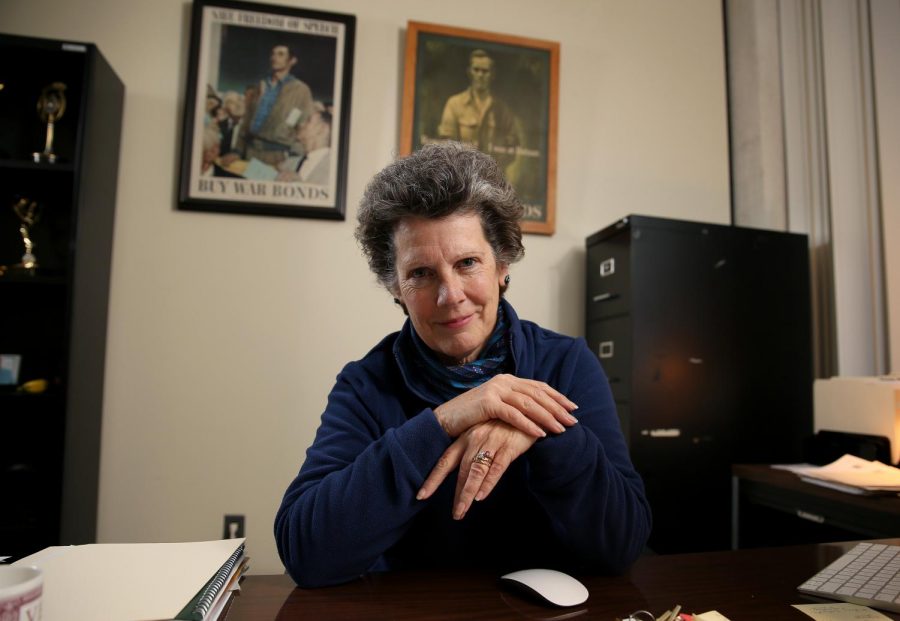 Janice Thompson, Director of the Journalism Department, in her office on Monday, January 13, 2020, at the Southern Illinois University campus, Carbondale, Illinois.

Thompson has received three Emmy awards for music composition, writing and directing and has produced several documentaries, one of which was narrated by Alec Baldwin. She has been a part of the university for 20 years.

Thompson said part of her plan to revitalize the school of journalism was inspired by a prime-time special she produced about food and cultures across different countries.

Thompson said she has an idea for a food journalism specialization in the School of Journalism.

“[Food] is really the best way to understand a different country or ethnic group because food is non-threatening,” Thompson said. “Everybody is usually proud of their food heritage.”

Another specialization Thompson said she finds interesting and hopes to create at the university is one in science journalism.

“Journalism can be used in so many different fields,” Thompson said. “To have that skill to be able to write and communicate complex topics and information is very, very valuable.”

Thompson said it is a huge honor to be the first female director of journalism.

“It’s an honor to be chosen by the faculty,” Thompson said. “We have such a distinguished group of people here in this school, that adds to why it is so great.”

Thompson said she hopes to see more women in leadership positions at the university as well as in general.

“I think it is important to have diversity,” Thompson said.

Thompson said she believes the shortage of women in leadership positions is due to a lack of role models.

“When I was one of the first female directors in sports, there were no role models,” Thompson said. “It was sort of like a jungle where you have your own machete and you’re trying to forge the path and stay up with everyone else.”

She said she would like to see former Journalism School alumni become mentors for students who are trying to navigate the field for themselves.

“They can be there for a journalism student who needs another perspective,” Thompson said. “They’ve been there, and they have gone through it.”

Other faculty and staff members within the school said they are looking forward to the plans Thompson has for the department.

“One of the things she was talking about doing is revitalizing our area down here,” Easton said. “Revitalizing the halls and the labs [and] creating scholarships for incoming students.”

Easton said Thompson is a pleasure to work with and that she is the kind of person who knows what she wants.

“She wants to see this program and the university succeed,” Easton said. “She is not afraid to put in the work to make that happen.”

“This is the perfect way to start the new decade,” Thompson said. “I think we should try to figure out how to make 2020 our’s.”

The Daily Egyptian also has an all-female editorial board for the first time since it first began publishing in 1916.

Staff reporter Bethany Rentfro can be reached at [email protected].