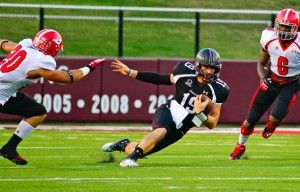 A missed extra-point attempt by junior place-kicker Thomas Kinney just before halftime proved to be the deciding factor Saturday night as No. 25 Youngstown State cemented a fourth-quarter comeback to stun the Salukis.

SIU surrendered a 13-point fourth quarter lead and failed to generate much offense in the second half as the Penguins (4-1, 1-0 Missouri Valley Football Conference) defeated the Salukis (2-3, 0-1 MVFC) 28-27 in the third annual Saluki Blackout Cancer game at Saluki Stadium.

“MyCole (Pruitt) wasn’t going to go down if it wasn’t for (injuring) his knee,” coach Dale Lennon said. “He was going to fight for every inch. Him fighting so hard is probably why he got injured.”

Pruitt suffered a knee injury on the play and Lennon said he was shook-up after the game.

“(Pruitt’s) in tears,” Lennon said. “This means a lot to him. I went into the training room and just gave him a hug, that’s all you can do.”

The severity of Pruitt’s injury will be determined later in the week.

Lennon was also upset about another heartbreaking loss.

“It’s disappointing losing the game, not having the ability to make the last play,” Lennon said. “We just simply couldn’t find the successful play to bring us out of the hole.”

Faulkner matched his career high with four touchdown passes in the losing effort. However, Youngstown State held the Salukis scoreless in the second half.

Faulkner was not pleased with the second half performance the Saluki offense displayed against the Penguins.

“You can’t put up 27 in the first half and not come out and score (in the second half),” Faulkner said.

Faulkner also led the Salukis in rushing with 71 yards on 14 attempts. Along with his 348 passing yards, Faulkner accounted for 419 of SIU’s 452 yards of total offense. That is the second-highest amount of total offense produced by a single SIU player in a game in school history.

“I’m a competitor, so if it takes me running the ball, or Malcolm (Agnew), or anyone on the team, I just try to do what’s best for this offense,” Faulkner said. “Tonight I was able to make some people miss and able to get downfield and get us first downs. It wasn’t planned, but it’s whatever you have to do.”

The Salukis have now lost three games this season by a combined 12 points.

In the Salukis next three games, they will face three conference opponents who were all ranked in the top 10 football championship series rankings before Saturday, including their next opponent South Dakota State, who was shut out Saturday 20-0 by conference rival North Dakota State.

Junior linebacker Jordan Poole said despite the tough road ahead, the team will not be fearful of any opponent on its schedule.

“We can compete with any team we play with so we’re not worried or scared of any opponent,” Poole said. “We’ll go to work at practice, watch film and get ready to beat whoever our next opponent is.”

More than 11,000 fans attended Saturday’s Blackout Cancer game during Family Weekend. Fans were able to bid to put their names or the name of a loved one who has been affected by cancer on one of the 80 special black jerseys the Salukis wore during the game.

The Salukis will head to Brookings, S.D. Saturday with hopes of evening their conference record as they take on South Dakota State at Coughlin-Alumni Stadium.