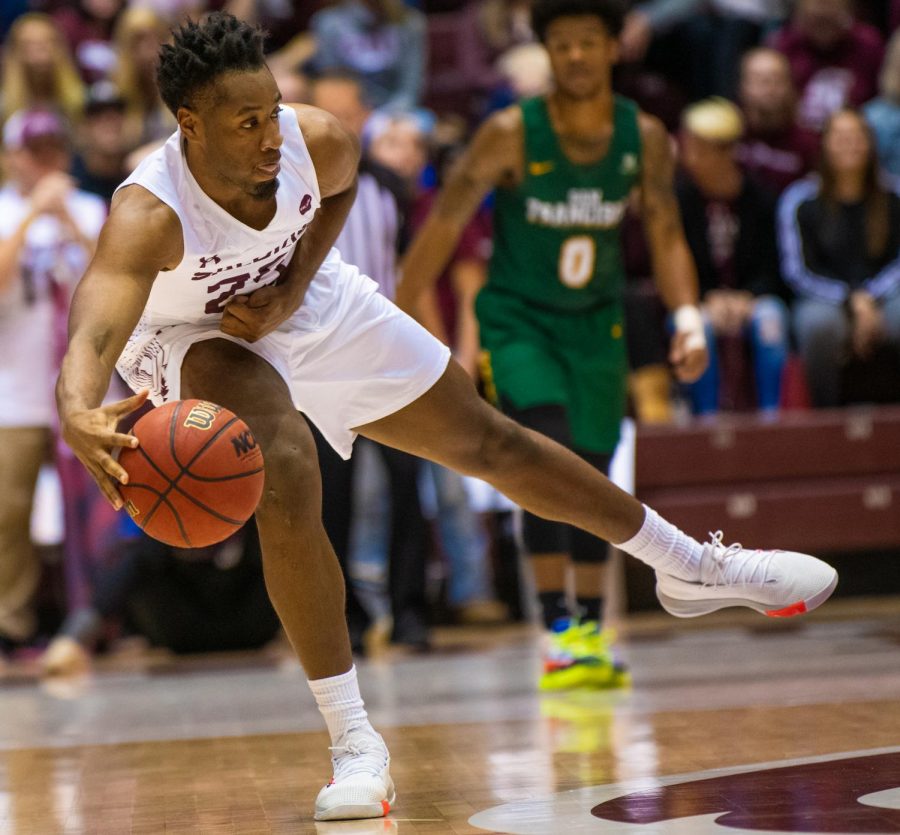 Junior forward Brendon Gooch passes the ball on Saturday, Nov. 16, 2019 during the Salukis' 60-76 loss to the San Francisco Dons inside the Banterra Center.

After being down 17 points to SIU in the first half and five total lead changes, the Southern Mississippi Eagles managed to rally and find a win over Saluki men’s basketball.

Senior guard Eric McGill performed for the Salukis on both ends of the court, totalling a team-high six rebounds to go along with four assists, three steals, and 12 points.

Freshman guard Marcus Domask put up the most points for SIU with 17, while junior guard Harwin Francois added 14.

For Southern Miss, senior forward Leonard Harper-Baker had a game-high 20 points and 11 rebounds, and sophomore guard Tyler Stevenson had 15.

SIU came out with energy in the first half, leading 24-7 within the first 10 minutes of play.

Domask dropped four three-pointers in the 10 minute  frame, leading the Salukis at the half with 14 total.

The tide changed for the Eagles as they finally picked up their momentum, running off an 18-1 scoring run to tie the game 15-all with less than five minutes left in the half.

Harper-Baker’s three-pointer gave SMU their first lead of the game, 28-27, before SIU rallied once more.

The Salukis led by eight at the half with a 42-34 advantage.

Francois put up a three, a jumper, and two free throws to help SIU retake the lead before the end of the half.

McGill led SIU with six rebounds in the frame.

Southern Mississippi controlled the game for most of the second half, coming out with a 12-3 scoring run to take a 46-45 lead at the 16:00 minute mark.

The Eagles didn’t let up from there, extending their lead to 10 points before the Salukis looked to make a comeback.

Southern Illinois’ Domask looked to get the buzzer-beater three, but the miss allowed the Eagles to grab the victory.

Southern Illinois will play next on Dec. 15 against the University of Missouri Tigers at Columbia, Missouri where graduate student Suggs Jr. will face his alma mater. Tipoff is set for 3 P.M.