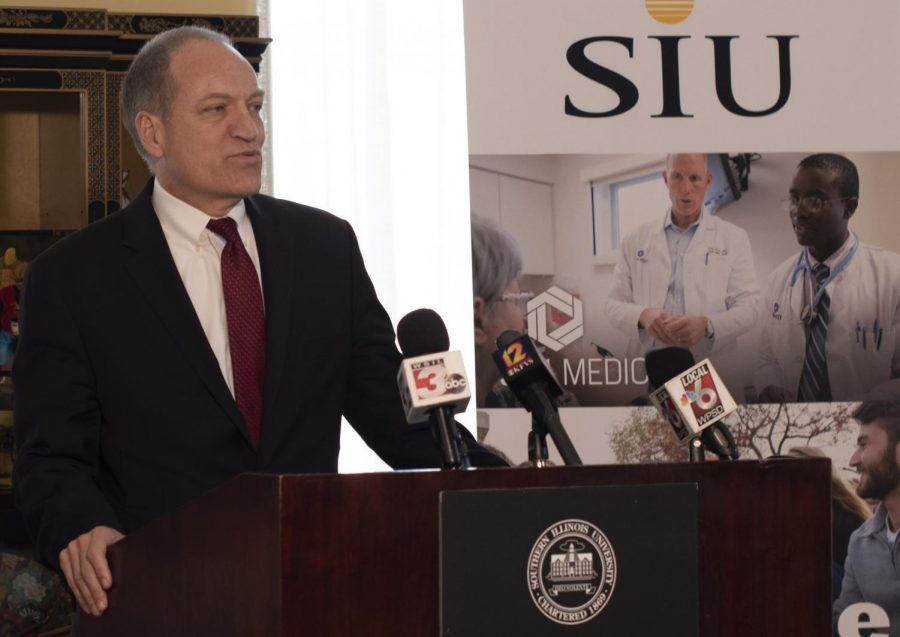 SIU’s new system president met with the press to discuss the future of SIU, his goals, diversity and enrollment.

See more: (Board of Trustees approves Mahony for President)

Daniel F. Mahony was approved as the new president at Thursday’s Board of Trustees meeting. Mahony is currently president of Winthrop University in South Carolina, and holds a PhD. in sport management.

“He comes to us with an outstanding track record and vision for this university and the system,” J. Phil Gilbert, chair of the Board of Trustees, said. “I think you will be impressed with him.”

Mahony said one of the main reasons he decided to take the position at SIU is the opportunity for impact.

“Whenever I look at new opportunities and new jobs, I want to go some place where I feel like I have an impact,” Mahony said. “I felt everything that was going on here at Southern Illinois University right now widened the opportunity for an impact.”

“The opportunity for impact here really was greater than I’ve seen anywhere else I have ever worked,” Mahony said.

Mahony said it is too early for him to set a definite number for his enrollment goal but he hopes to see it higher.

“I feel very positive about the application numbers that were released yesterday,” Mahony said. “That suggests we are moving in a positive direction.”

Mahony said the first thing he is focused on is finding the new Carbondale chancellor.

“Finding a good partner in that position would be one of my first priorities,” Mahony said.

Mahony said increasing enrollment is one of his top priorities. He said an enrollment decline is occurring across the U.S. and SIUC isn’t unique in its struggle.

Mahony is against splitting up the SIU system.

“I think we are much more effective as a system,” Mahony said. “I think there’s advantages to the system, one of my attractions to the position was the system.”

Mahony said he saw from his time at Kent State that when multiple campuses within a system work together, they can have more of an impact.

While he said he has not had time to fully research SIU’s academic reorganization plan, Mahony said he supports reorganizing administrative roles to help schools cut costs and said he did a similar plan at Kent State.

“Right now if you are not looking at what you can do to save administrative costs, you are probably not doing your job as a university administrator, that’s just a reality of where we are,” Mahony said. “We need to look at every opportunity to become more efficient at what we do.”

Mahony said he has been a strong advocate for diversity and inclusion at all of his previous roles with universities.

“If you look at students, people under 18 already, white is not the majority,” Mahony said. “If we are a public university we should be reflecting what’s happening in the demographics of our communities and we become increasingly diverse.”

Mahony said if a university is not increasing its diversity and meeting the needs of diverse students on campus, it is not doing its job as a public university.

One of the reasons he wants to be on both campuses, is so that he can get to know the students and faculty, Mahony said.

“I eat in the cafeteria on a regular basis,” Mahony said. “Any student who sends an email to the president’s office I will have lunch with, I’ll take them out to lunch I will do that same thing here during the period in Carbondale, during the period I’m in Edwardsville.”

Mahony said he hopes to initially live in Carbondale and teach a class called History and Current Issues with College Athletics, if allowed, then he plans to move to Edwardsville and teach the same class, before settling in Springfield.

The main reason for his move to Springfield, Mahony said, is so he can lobby at the capitol on behalf of the SIU system.