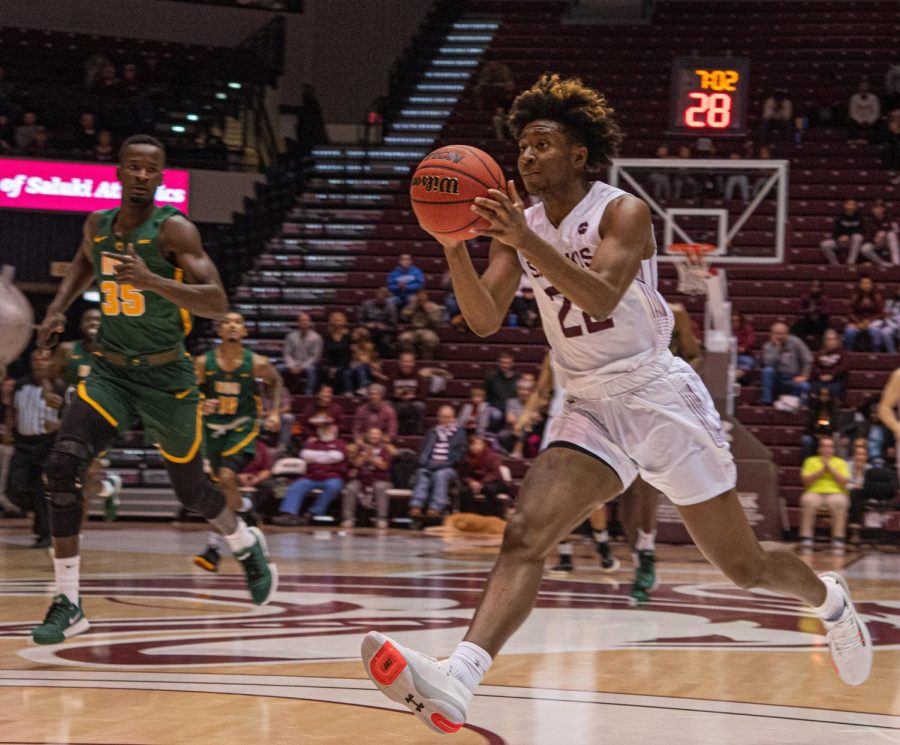 Harwin Francois breaks away for the basket during SIU’s 76 - 59 win over Norfolk State on Wednesday, Dec. 4, 2019 at Banterra Center.

“As Southern Illinois basketball, we’re just really thankful for all that they do and we appreciate them coming out. We’re glad to get this win for them,” freshman guard Marcus Domask said.

Southern Illinois (4-5) handed Norfolk State (3-7) their sixth loss in a row. This is the first time the Salukis have faced the Spartans, who come from Norfolk, Virginia.

“Whenever you’re in front of your home fans, you want to play well for them, you want to make coming out worthwhile for them. And to get this, and then hopefully build on it, it would be great. This is the point of the season where we want to start clicking,” Domask said.

“I thought they competed, for the most part, for all 40 minutes tonight. I thought there was great energy, and the bench came in and made a difference tonight,” Mullins said.

Freshman guard Marcus Domask finished the night with a points-rebounds double-double, totaling 18 points and 12 rebounds ,7 offensive, 5 defensive. 12 of those points for Domask were from the three-point line.

Freshman guard Trent Brown finished with four of the team’s eight steals, while tallying a career-high 11 points, shooting 3-5 from the three-point line.

“I thought Trent played really well on the defensive side of the ball. He got some big stops, was physical guarding the ball, and I think that gave us a great lift,” Mullins said. “And I think Eric had his most complete game of the nine games we’ve had so far. I thought he was locked in every single possession.”

The Spartans were 6-20 from the three-point range for the night, and shot at a 44% overall, while Southern finished with a 48% on 54 shots.

“If you could just sit in the gym for a day, you’d see how many people come in and out just getting extra shots up,” Domask said. “There’s a reason why we shot [well], and it’s because we’re getting in the gym.”

Southern looked strong from the three-point range in the first few minutes of the game as Domask hit his first two shots for the night and McGill hit one as well.

Jones brought the Salukis some momentum from both ends of the court towards the 10-minute mark, scoring on three possessions in a row while drawing the charge on Spartan junior center Esftrarios Kalogerias on the defensive end.

Jones finished with three charges total for the game.

The Spartans found 10 points from second-chance scoring opportunities in the half, totalling 18 rebounds to SIU’s 16.

Norfolk State made a 7-2 scoring run to open up the first four minutes of the second half.

SIU found a run of their own in response, Brown contributing two three-point shots while Francois and McGill each had one.

Southern picked up the pace with less than five minutes in the half, Domask sparking the momentum with a dunk in the open lane drive.

After a scramble on the floor, the Salukis got Francois the ball for the three-pointer from the baseline, and Jones hit a layup while drawing the foul.

Southern Illinois will take the court again on Dec. 7 against Southern Mississippi in a road game at Hattiesburg, Mississippi. Tipoff is set for 2 P.M.