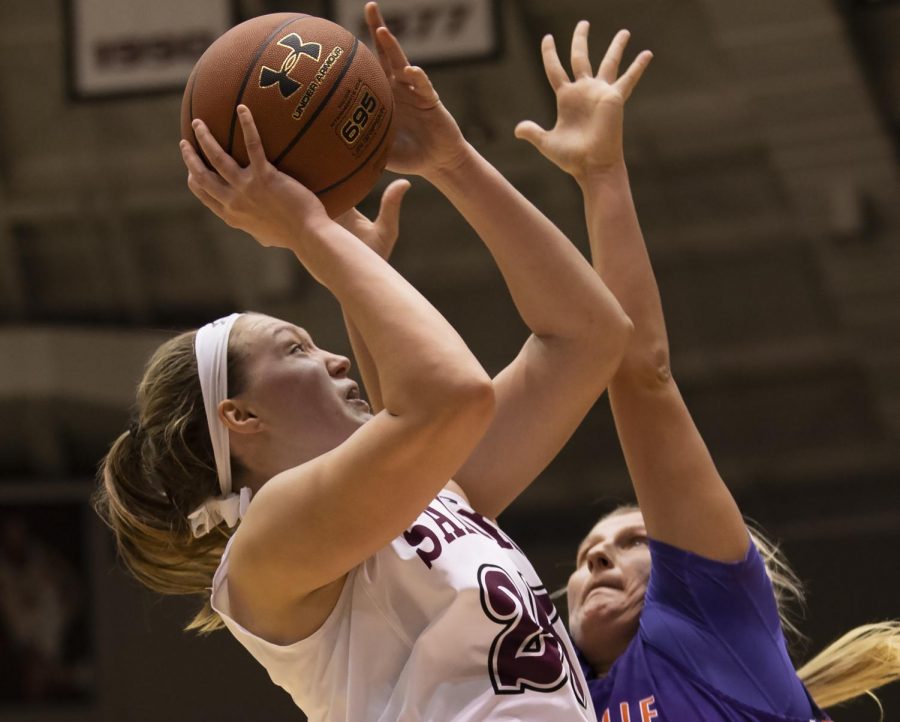 Sophomore forward Abby Brockmeyer goes for the basket on Friday, Jan. 4, 2019, during the Salukis' 47-64 win against the Evansville Purple Aces at SIU Arena.

Southern fell 70-66 to Memphis in the Banterra Center today, after facing a 23 point halftime deficit.

Southern faced off against Memphis in their annual field trip game, where elementary students from around the area were invited to see the women face off against the Tigers.

“Obviously, [the loss] is not what we wanted, but I will say this, that was a great atmosphere, a great crowd,” head coach Cindy Stein said. “I can’t appreciate any more the schools that got involved; the kids were awesome.”

The Salukis came into the game looking to win their second straight game after winning their home opener 76-65 over Tennessee Tech.

Through their first three games of the season the Dawgs had been on a scoring tear, breaking a 39-year school record with 257 points scored across the three games.

The Salukis (2-2) started the game off fast with a layup by senior forward Nicole Martin and a three-pointer by junior forward Abby Brockmeyer to open up a 5-0 lead 57 seconds into the first quarter.

Southern went to the dribble-drive offense early and often in the opening quarter as they scored 10 points in the paint to push out to a 16-10 lead with 4:50 left in the quarter.

After opening up the six-point lead, the Tigers (2-3) defense forced three turnovers on Southern and held the Salukis scoreless for the last five minutes of the quarter allowing Memphis to push out to a 22-16 lead at the end of the first quarter.

“It was like one missed shot after another and then they were making shots left and right,” Brockmeyer said. “They were just getting it going.”

Memphis held Southern scoreless for almost 10 minutes until Martin broke through with a pull up jumper halfway through the second quarter as SIU trailed 27-18 with 5:39 left in the half.

The Salukis were unable to make defensive stops while the offense scored six points from the 5:21 mark of the first quarter until the end of the second quarter, as the Tigers pushed out a 43-22 lead at halftime.

At the beginning of the third quarter, the SIU defense limited the Tigers to two points while the Salukis went on an 11-2 run led by four points from both Brockmeyer and senior guard Brittney Patrick.

“Most of the time when you get blown out in the first [half] it just continues into the second,” Brockmeyer said. “I thought we did a really great job of fighting back, but when you go down 20 in the first half, it’s hard to come back from that.”

The Southern defense forced seven turnovers and limited Memphis to eight points as the Dawgs poured in 22 points to cut the Memphis lead down to 51-44 heading into the fourth quarter.

“We executed better, we really executed our offenses better,” Silvey said. “I think the first half we got really sped up with the combination of their speed and the noise, in the second half we settled in and did a lot better job.”

SIU pulled within five in the fourth quarter after a jumper by junior guard Mackenzie Silvey but two fouls on the Salukis and four free throw shots later the Salukis found themselves down 56-46.

Down three with limited time, SIU began fouling on each of the Tiger’s possessions. Memphis missed four out of five free throws as the Dawgs trailed 70-65 with 13 seconds left.

“I think we just made some adjustments in the locker room at halftime,” Silvey said. “We really got them off the offensive glass that was kind of killing us in the first half.”

Brockmeyer went to the free throw line and made one of her two shots to close the gap within four, and a last second steal almost ended in a basket for Martin, but the comeback fell short as SIU lost 70-66

Southern will be back in action Saturday at Eastern Michigan; tip-off is set for 11 a.m. in Ypsilanti, Michigan.

Sports Editor Adam Warfel can be reached at [email protected] or on Twitter at @warfel_adam.