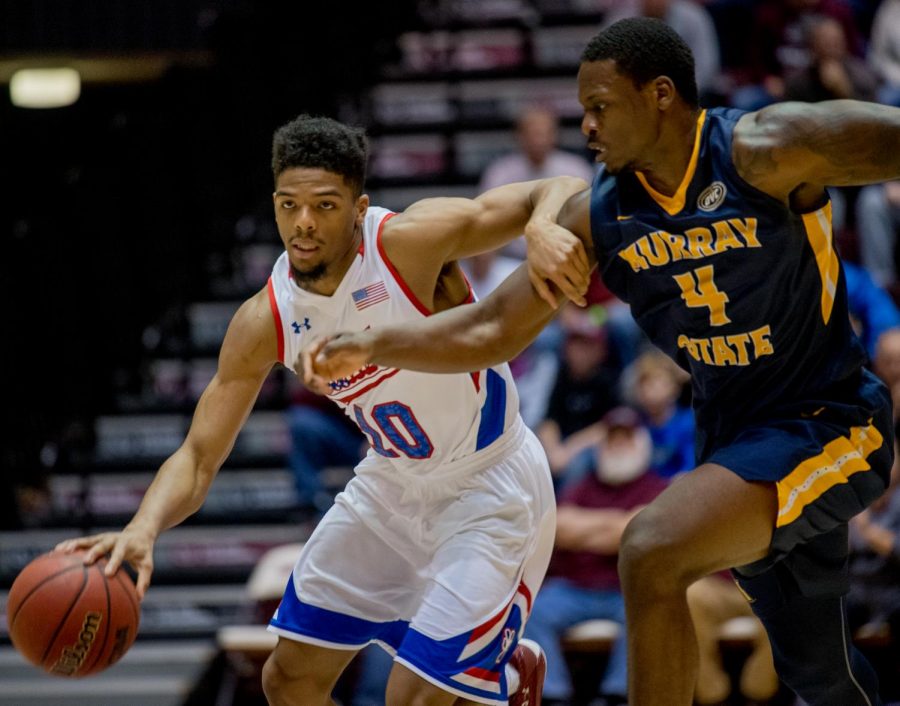 The past two games have proven to be tough ones for Southern men’s basketball as they lost their second straight game after falling tonight to Murray State.

Prior to tonight, the Salukis took on the University of San Francisco Dons falling 60-76 in the matchup. The Racers of Murray entered tonight on a 100-point win against Brescia University.

Tonight’s game for SIU was similar to their last as they seemed to start very strong and keep the game close, only to fall behind in the middle of the second half.

It took Murray five minutes to get on the board, and they did so with a short jumper in the paint to earn two-points.

The Racers began to score steadily after their first points, earning two more baskets on the next possession, but Southern had already found its rhythm giving them an answer for every shot made to stay ahead.

Just a few minutes later, SIU started to lose steam on offense and Murray State took off on a 5-1 scoring run that gave them their first lead of the game at 19-18.

The lead switched, again, when the Salukis were sent to the foul line on two separate occasions with Suggs and senior point guard Eric Mcgill. At the foul line, Southern went 3-for-4 taking only a small lead.

After the free-throws, the lead between the two teams continued to switch back-and-forth until the Racers scored three unanswered baskets as the period closed to take a 34-28 lead entering halftime.

Suggs got the scoring started for both teams in the second half, scoring four quick points with a jump-shot and two free throws to get the Salukis in close range of their opponents.

A layup in the paint from Benson earned SIU a one-point lead with the score at 35-34, but Murray was able to force a foul on Southern and get to the free throw line to regain the lead.

Scoring remained close until the Racers found a rhythm and went on a 10-3 scoring run to take the biggest lead either team had seen since the first half at 60-54.

Murray State continued to attack the Saluki defense and went on another scoring run, this one being 8-2, to extend their lead to 14 points.

While Southern players like McGill, and sophomore guard Harwin Francois were able to find ways to score, their efforts were no match for the Racer offense that began to score nearly every time down the floor.

After the Murray scoring runs, the SIU offense was unable to recover from the deficit, and they fell 79-66 in the matchup.

Men’s basketball will return home to play in the Banterra Center on Nov. 26 against North Carolina Central University. Tip-off is set for 7 p.m.