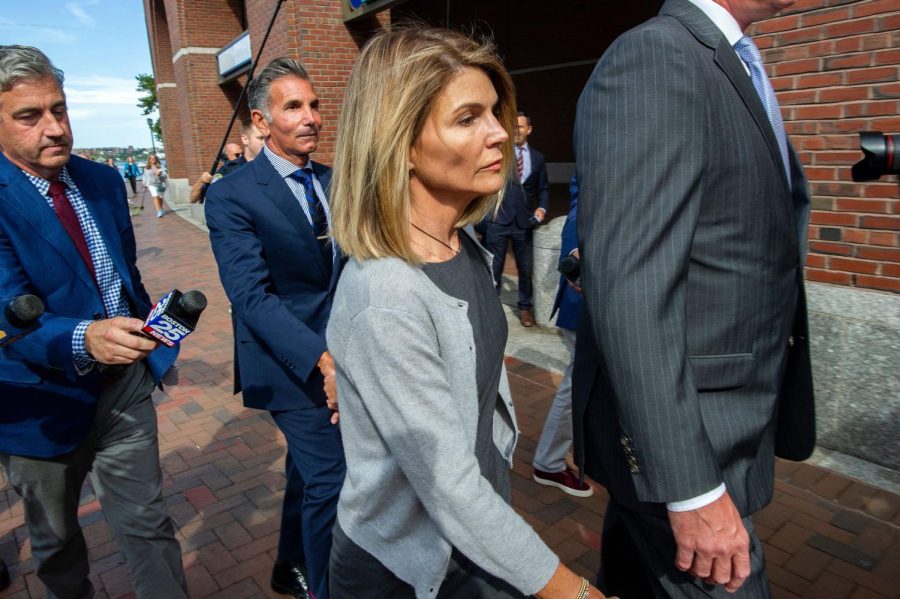 BOSTON — It was a sentencing hearing for Toby Macfarlane, a Del Mar insurance executive who will spend six months in prison for conspiring to have his children admitted to USC as bogus athletic recruits.

But on Wednesday, all eyes were on U.S. District Judge Nathaniel M. Gorton, who is also overseeing the cases of 15 other parents who’ve maintained their innocence in an investigation of fraud, graft and deceit in the college admissions process.

Lori Loughlin’s legal fate will be decided in Gorton’s courtroom. So, too, will those of many other high-profile names embroiled in the scandal, among them Loughlin’s husband, fashion designer Mossimo Giannulli, and Bill McGlashan, a San Francisco Bay Area financier.

Six attorneys for other parents charged in the scandal filled a bench in Gorton’s third-floor courtroom, taking notes and trying to gain insight into how the 81-year-old jurist views the allegations of fraud and bribery the government has brought against clients of William “Rick” Singer, the Newport Beach consultant who oversaw a scheme to defraud some of the country’s most elite universities with rigged entrance exams, fake athletic credentials and bribes.

They got their answer. In Gorton’s first sentencing in the case, he delivered a withering dressing-down and a penalty to match.

Macfarlane’s conduct — paying Singer $450,000 to slip his son and daughter into USC as phony athletes — was “devastating,” Gorton said. Macfarlane’s crimes may have been possible because of his wealth, Gorton said, but his actions were no different than those of “a common thief.”

Gorton doubled the sentencing range recommended by the court’s probation department, and committed Macfarlane to prison for six months — the longest sentence handed down in a scandal that erupted in March.

Thirty-three parents, hailing from some of the country’s wealthiest enclaves, were arrested and charged with conspiring with Singer. Some were accused of paying him to fix their children’s SAT or ACT scores; others, to misrepresent their kids to their schools of choice as promising athletic recruits, with the blessing of a coach on Singer’s payroll. Two more parents have since been charged.

Nineteen parents have pleaded guilty, as has Singer. Fifteen have pleaded not guilty to charges of fraud and money laundering, and 11 of the 15 face a bribery charge as well. Federal prosecutors are trying to extradite a 35th parent from Spain.

Gorton appeared to throw cold water on a theory floated by some parents charged in the scandal, who have insisted they didn’t know the details of an athletic recruiting scam that allegedly transformed their children — with Photoshop software, fake credentials and bribes to college coaches — into standouts in sports they didn’t play competitively, or at all.

Those parents’ attorneys have said they didn’t know where the money was going when they made six-figure payments to Singer or his sham charity. Macfarlane’s lawyer, Ted Cassman, said as much Wednesday.

“It wasn’t his understanding” that Singer would pay off two USC coaches and an administrator to ensure his children were admitted, Cassman said. Macfarlane believed Singer “would use his influence, friendships, relationships, whatever he was going to do, to get his kids into USC,” Cassman said.

“So he thought he was making a gift to Mr. Singer, who would miraculously get his kids into USC?” he asked. “Whether you call it a bribe or not, that sounds like a bribe to me.”

While he didn’t agree with the prosecution’s argument that the high-dollar amount of Macfarlane’s payment should lengthen his sentence, Gorton said Macfarlane’s crimes were nonetheless “serious and caused real harm,” deserving of a harsher sentence than the range recommended by the probation department.

The probation department, which gives Gorton a report before sentencing, concluded that Macfarlane’s victim, USC, suffered no monetary loss.

Eric S. Rosen, an assistant U.S. attorney, on Wednesday pushed back on that finding, arguing that Macfarlane and his conspirators had thieved from USC the salaries it paid to employees who were working not in the interests of the school, but of Singer and his clients.

The fraud perpetrated by Macfarlane, Singer and their co-defendants has also forced USC to fund costly investigations and hurt the school’s reputation, Rosen said.

Gorton appeared to agree, but said it was “impossible to calculate the exact monetary harm incurred by one defendant’s crimes.”

The judge did not allow the dollar amount of Macfarlane’s $450,000 payment to stand as a proxy for USC’s loss, which would have increased his recommended sentencing range.

Macfarlane “did not gain the sum he paid in bribes,” Gorton concluded. His children may have gained the benefit of a degree from a prestigious school — although his son left USC before graduating — but what their father reaped from his crimes is “incalculable,” Gorton said.

In a sign that defense attorneys see Gorton as handing down harsher sentences than his peers at the courthouse, lawyers for 17 parents charged in the scandal wrote an unusual letter in April to Patti B. Saris, the chief judge for the district of Massachusetts, protesting the government’s intent to add their clients to an indictment that had already been assigned to Gorton.

Calling it “a clear form of judge shopping,” the attorneys said prosecutors so wanted to try their cases before Gorton that they had circumvented the process that assigns cases to judges at random.

They qualified their complaint by saying, “To be sure, we deeply respect Judge Gorton.” But Andrew Lelling, the U.S. attorney for Massachusetts, said in a letter of his own that what those attorneys “fail to say — but of course mean — is that they want a different judge because they perceive Judge Gorton as imposing longer sentences in criminal cases than other judges in this district.”

Such a gripe, Lelling said, was a “hail Mary by people who know better.”

The parents whose attorneys signed the letter were not, in the end, reassigned to a different judge.