It takes a village: Carbondale community comes together to discuss gun violence 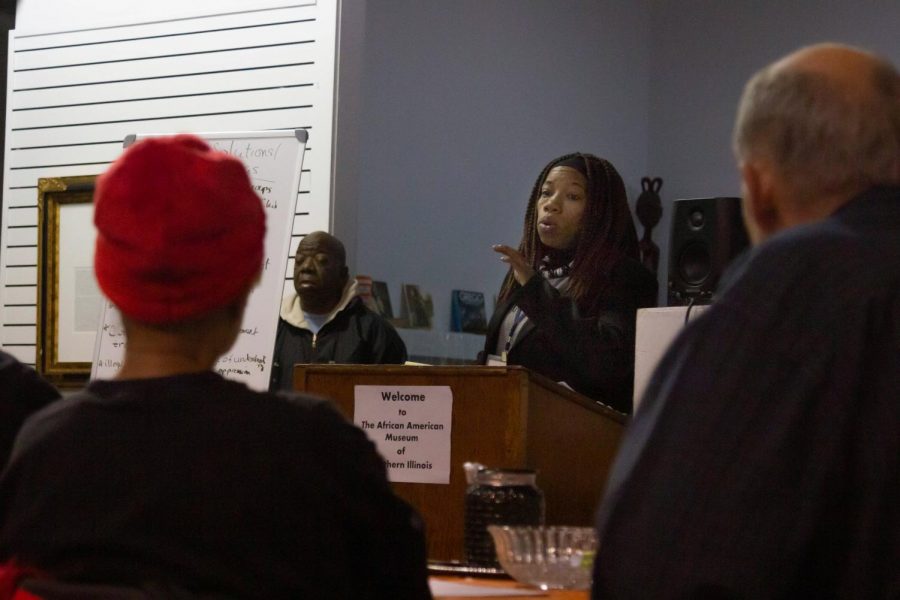 The community of Carbondale held a meeting discussing topics such as Carbondale shootings and how the community can get more involved with the youth. The meeting was held at the African American Museum at the Carbondale University Mall on Thursday, Nov. 14 2019.

Recently, Nancy Maxwell has been making t-shirts for young Carbondale men who were killed due to gun violence.

“I made a t-shirt for a young man in April that had died. The young man that came to get the t-shirt from me was Xe’Quan. Now four months later, I’m doing a t-shirt for him. And I was called yesterday for yet another young man that just died, [and] they want a t-shirt for,” Maxwell said. “I like making money, but I don’t want to make money this way.”

Maxwell decided to take action about these deaths and organized the community forum so she would not have to make more t-shirts for those who died of gun violence in the future.

After Maxwell organized the event, Carbondale community members gathered at the African American Museum on Thursday to discuss solutions to gun violence in the aftermath of the rash of shootings.

“It’s fine to do a vigil, it’s fine to march but after that’s over with, after the funeral is over with, after the young man’s picture is on T.V., what happens after that?” Maxwell said. “That’s what I want to work on today and other subsequent meetings is coming up with some solutions because more minds are better than just one. I believe together we can make a difference.”

Maxwell said Carbondale is not going to solve the gun violence epidemic overnight, but the community can make progress.

“We are the change that everybody is looking for,” Maxwell said.

At the beginning of the meeting after introducing themselves, the crowd wrote down what they identified as the most important problem facing Carbondale and an idea to solve it.

Common problems the group identified were gang activity, access to guns, safety in schools, a lack of city investments, illegal drug usage and a lack of organized activities for youth in Carbondale.

Deborah Woods, a Carbondale community member, said many of these issues are stemming from anger.

One of the common solutions that was discussed in the room was mentorship programs for Carbondale youth.

Linda Flowers, a former principal and Carbondale community member, said the superintendent of the local elementary district is working to establish a mentorship program.

“Everybody here can be a mentor,” Flowers said.

The superintendent is trying to start a program where individuals can go into the school to have lunch, go on the playground, read and do math with the kids, Flowers said.

“As you develop a relationship with a student you’re also kind of mentoring the family,” Flowers said.

Flowers said those interested in becoming mentors could stop by any school in Carbondale.

“Tell them you want to fill out that volunteer form and submit to the background check, and then let them know you’re interested in mentoring a student,” Flowers said.

Ernestine Hughlett, a Carbondale community member, said she identified herself as one of the youngest in the room.

“We were raised by a village. Carbondale has lost the village mentality; because of that I believe we have become outstanding citizens but anything after us, we lost that generation,” Hughlett said. “I personally didn’t have my grandmother here, so […] a couple other people helped raise me in this community when my mother and father were at work. We don’t have that [anymore].”

Hughlett said youth need an older person to mentor them.

“To take them in the wings and let them know that they’re loved, [to show them] they can be somebody in this community if not just in the world,” Hughlett said.

Hughlett said another solution is going into the schools.

“Get in the school, volunteer at the school, get to know these kids one-on-one,” Hughlett said. “They’re not going to talk to you if they don’t know you, and they don’t think you know their parents.”

Hughlett said even if community members just volunteer to clean up the lunch room it will cause the kids to recognize them around town and get to know them.

Some attendees asked the room, what about the children who are not in school?

Melissa Johnson, a Carbondale community member, said she is a mental health worker within the community and works with kids who are not in school.

“I know a 10-year-old right now making meth. So, how do we get to that 10-year-old who doesn’t even know how to add and subtract?” Johnson said. “If you’re making meth, you have what? A gun at 10 years old.”

Johnson said the kids are telling her they don’t go to school, and the schools and their parents don’t understand them.

“Yes, those kids in school do need to be protected, but we also need to look at the ones down the street that are homeless,” Johnson said. “They’re not going to be easy to say ‘hey, go with me to the playground’ because they don’t know how to play.”

“Conflict resolution is something children learn when they are small,” Killman said. “They learn it in their homes, but I don’t think that every child that grows up learns how to solve disputes with a gun in their home. I think we have created an entire culture around solving problems with the implied force of a gun.”

Killman said there needs to be a way to talk about a cultural de-escalation of violence.

“We need to de-escalate our entire violent culture,” Killman said.

Maxwell said the purpose of the meetings is to unite Carbondale. She said she hopes even more community members, council members and the mayor will attend the next one.