What does it all mean? Campus Conversation discusses SOTU 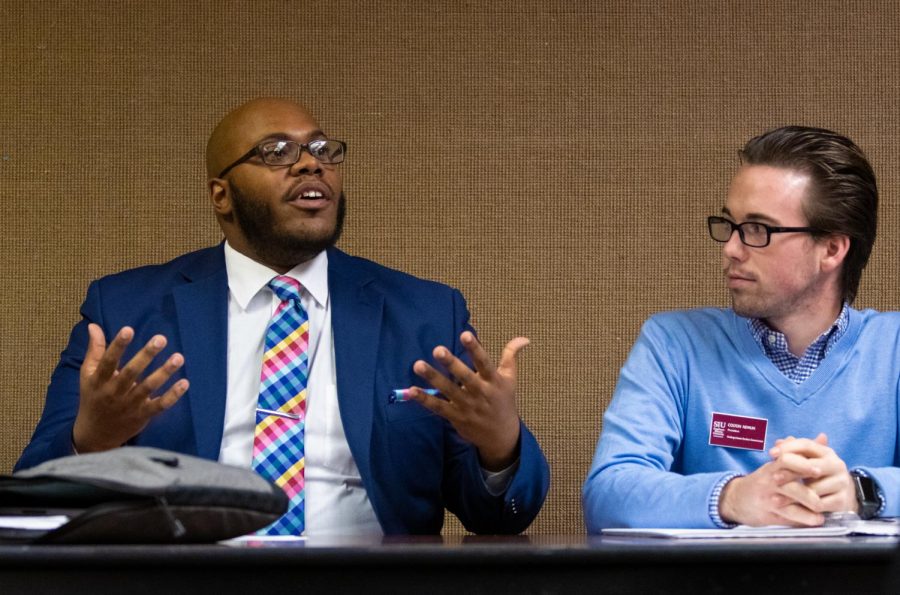 Student Trustee Brione Lockett begins the meeting on Wednesday, Nov. 6, 2019 during a Campus Conversations meeting in the in the Student Center.

Wednesday’s Campus Conversation directly followed the State of the University Address given by the interim chancellor and discussed how exactly SIU is implementing the initiatives discussed and asked for student input.

“I feel like the address wasn’t necessarily for students,” Newlin said. “I feel like while it was being presented, it was kind of for people in the community, the representatives that were there or administration that just isn’t on the up-and-up, but it wasn’t really for us.”

Lockett said while he also wishes the address focused more on students, he was glad to have the address.

“We are talking about retention and recruitment, don’t talk about us without us,” Lockett said. “But, I will say I’m thankful for the State of the University because we have yet to have had one in a very long time. That’s a huge positive.”

Jeremy Allen, a graduate doctoral student studying sociology, said he was curious as to the amount of significance the presentation placed on enrollment.

“It seems that all the other problems are brushed to the side, the problems that compound this,” Allen said. “I don’t think that declining enrollment is a problem, it’s a symptom of a problem. The symptom of a larger problem, and we don’t address that.”

Avian Wilkins, a sophomore studying political science and coordinator of the Black Affairs Council, said some of the things the chancellor discussed in his speech have only a couple people working on them when there is a lot to be done.

Wilkins said SIU actually doesn’t have some of the things the chancellor mentioned in his speech.

“Some of the stuff that they said we have, they don’t know that we don’t have it,” Wilkins said. “There is no one in the Black Resource Center, and they listed it.”

Wilkins said not everybody knows what’s going on.

“How are we promoting diversity and inclusion if somebody is not even in this spot?” Wilkins said.

Allen said the focus needs to be on creating an environment where students want to stay at SIU.

“Let’s not focus on just trying to keep warm bodies in seats,” Allen said. “Why are we not focusing on creating an environment where a diverse population of students can flourish, can learn?”

Allen said doing this would also help to improve the University’s recruitment because students who are happy with SIU will return home and recommend the school to their friends and family members.

“There’s an understanding that if we just keep the numbers then that’s what’s important but it’s not,” Allen said. “The numbers will come if you are providing the quality of education that makes students want to stay here.”

Allen said part of the problem in addressing these issues is that the pressure is placed on faculty members of color to support students of color.

“If I have a problem it is understood that I am going to seek out somebody with whom I can relate, rather than somebody who may be in the position to solve that problem,” Allen said. “We have to overcome the idea that it’s not the Africana Studies department’s problem, issue or responsibility to take care of all the African American students.”

Allen said all faculty members should be invested in student’s success.

“All administrators should be invested in all students’ success regardless of differences,” Allen said. “Isn’t that what diversity and inclusion mean? It doesn’t matter who I talk to, it means that I talk to somebody who gives a shit about what I’m going through.”

Allen said the campus keeps hearing about diversity and inclusion, but the numbers don’t match up.

“At what point do we stop believing that this is what administration actually wants?” Allen said. “We hear this over and over ‘we need to do this, we need to do this.’ It’s not that you guys are in the position to change this, I just think that if administration isn’t held accountable for doing what they say their going to do, then we’re not going to get anywhere.”

Newlin summarized the four points the chancellor ended his speech with and rewrote them.

Newlin said the first point was to “be supportive and be positive.”

Newlin said the next point was “know your shit about your damn job.”

“If you’re going to have a job, if you’re going to have a title, know what the hell you’re doing,” Newlin said. “Know what your duties are and do it. We have administrators who I won’t call out here, that are so freaking lazy. They don’t do anything; they come and give a presentation at a committee, and they don’t know what they’re talking about.”

Newlin said these administrators are making significant amounts of money.

“If I was getting paid that much, my job would be done every day, and you better believe it,” Newlin said.

Newlin said his next point was you either play for the team or leave.

Newlin’s said his final point was to be proud of who you are, and be proud of being a Saluki.

“Being a Saluki means being your individual self and whether that’s not being promoted or expressed by the university, in an official and big way, be proud of who you are,” Newlin said. “When you yourself are showing who you want to be, it spreads to other peopl. That positivity within the student body spreads up to administration.”

Newlin said students have to realize that change starts with them.

“At this point, we realize it’s not going to trickle down, it has to trickle up,” Newlin said. “We can’t wait on it.”