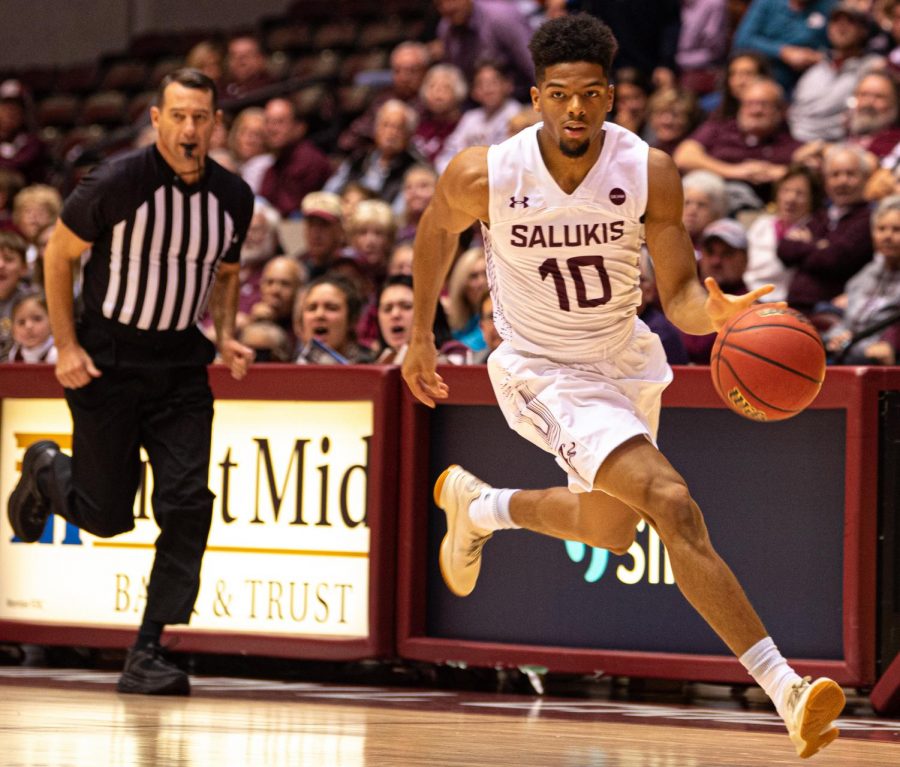 Saluki guard Aaron Cook breaks away with the ball on Tuesday, Nov. 6, 2019, during the Salukis' 76-48 win against the Illinois Wesleyan Titans inside the Banterra Center.

“The guys were happy for me,” Mullins said. “I kind of brushed them aside and said there’s going to be a lot more this year, so let’s get focused for Friday. I appreciate the guy’s excitement for me for sure.”

The Salukis’ lead 10-0 after less than three minutes and never fell behind in their 28-point win.

The Salukis started off shooting 62.5% in the first five minutes while only holding the Titans to 28.6%.

The Salukis made their first basket after a two-point bucket by senior guard Aaron Cook.

Senior guard Eric McGill made two early three-pointers as the Salukis took command in an early 12-5 lead with just under 15 minutes left in the first half.

They would keep on extending their lead as they took a 12-point lead, 21-9, with freshman Marcus Domask leading the way with nine points.

Southern Illinois kept holding on to the advantage as they would keep leading all game as the Titans could not seem to find an answer for the Salukis.

The Titans had foul trouble as they committed seven team fouls with just over one minute left in the first half putting the Salukis in the bonus.

Barret Benson, a graduate student who is a guard, hit a big three-pointer with just over a minute left.

“It feels good to see the ball go through the net,” Benson said. “I feel like it really builds confidence a lot, and that is what you need going into the season. We got three tough games coming up, so it felt good to get a couple baskets to fall.”

The Salukis went into halftime with a commanding 36-18 lead.

Coming back after halftime, the Salukis continued their lead. With just under two minutes left, they took their biggest lead of the game as they took a 25-point lead.

“We kind of jumped on coach in the locker room celebrating our first win,” McGill said.

Cook took ahold 10 points, a career-high seven rebounds with five assists, according to Saluki Athletics. Cook is one shy away as his assists lead him into the top-20 of all time at SIU in career assists.

The Salukis will play in the Sunshine Slam next weekend. The team will play on Friday at 6:30 p.m., Saturday at 2 p.m. and Sunday at noon.

Sports reporter Zach Kramer can be reached at [email protected]