The history of the African American History Museum 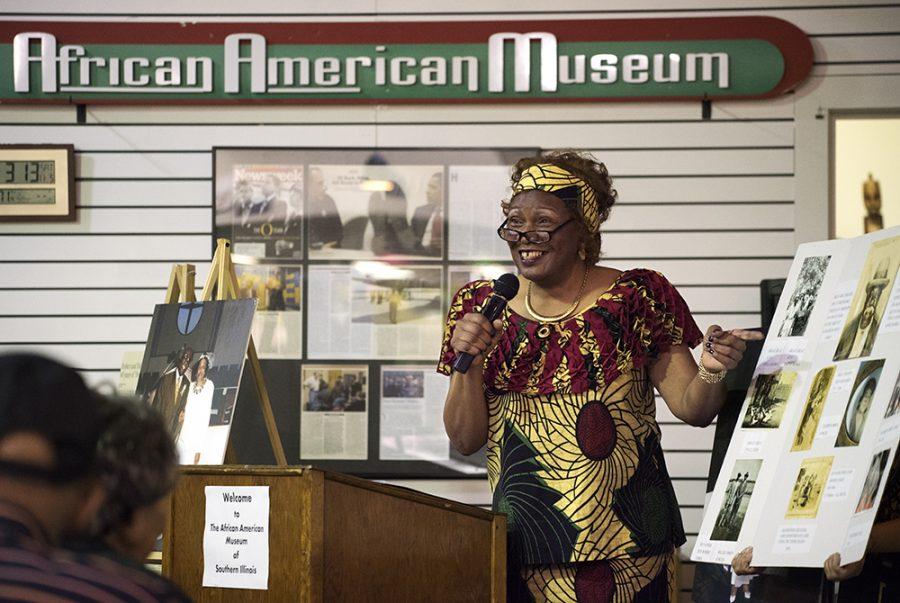 Elder Marilyn James, of Carbondale, indicates to a 1937 image of her great-great-grandfather, the Rev. D. Smith Banks, during her "From Slavery to Greatness" speech Saturday, Nov. 5, 2016, at the African American Museum in the University Mall. (Morgan Timms | @Morgan_Timms)

The African American Museum of Southern Illinois has made its goal to “to identify, preserve and portray outstanding achievements in African American history and culture,” according to the museum’s website.

Co-founders Corene and Milton McDaniel have been married for over 50 years and started the museum over in 1997 while Corene was the president of the local chapter of the NAACP.

“[The NAACP] had an award that people could apply for,” Corene said. “As the president, the committee chose the person, I wanted to read and know more about that person.”

Going through the applications for the award, Corene said she realized she didn’t know about some of the accomplishments of the applicants.

“Come to find out, they had done so much stuff that I had no clue about,” Corene said. “We decided that we needed to start letting people know about members of our community that made these outstanding accomplishments.”

Milton said one of his favorite pieces at the museum is an exhibit that tells the story of Aaron Walker, one of the Tuskegee Airmen, the first African American U.S. military pilots.

“My favorite piece here is that hanging up on the wall over there, of the Tuskegee Airmen,” Milton said. “He is a local Carbondale man. His brother I knew quite well. We lived on the same street growing up.”

Walker is the sort of citizen that the founders had in mind when creating the African American History Museum.

“It gives me some pride that someone from the little town of Carbondale, on the same street that I grew up on, that could make a difference in history,” Milton said.

Corene said there is a lot to do at the museum but she and Milton don’t mind doing it.

“We are professional volunteers,” Corene said. “There is always something to do somewhere. We have been very blessed so we do not mind doing it. A lot of the time we do it together so that is still spending some quality time together.”

Milton faced adversity in his career, as an African American locomotive engineer.

“It inspired me so much in my occupation, I was the first African American locomotive engineer to run a train north of the Ohio river,” Milton said. “And everyone tried to turn me back and discourage me from continuing my job, continuing my career. Fortunately, two years ago I retired after 50 years.”

After retiring from a long career on the railroad, Milton said he learned many things. The most important take away he got from his experiences was that everything comes with a price.

“There is a price to pay for everything,” Milton said. “I gave up a lot but I gained a lot. What I learned is that if it’s worth having, it’s worth working for.”

DeSande R is the treasurer of the board of the AAMSI. The museum board, along with Corene and Milton, maintain the museum.

“We all have different duties,” R said. “Milton helps with the volunteers. Corene helps watch over the museum and do hours there. The president has to do a report to send to Carbondale Community Arts on the activity of the last three months.”

DeSande said her duties include the financials and maintaining the website for the museum.

The museum is located in the University Mall and is open from 1 p.m. until 6 p.m. Monday through Saturday.

Staff reporter Juniper Oxford can be reached at [email protected] or followed on Twitter at @JuniperOxford.