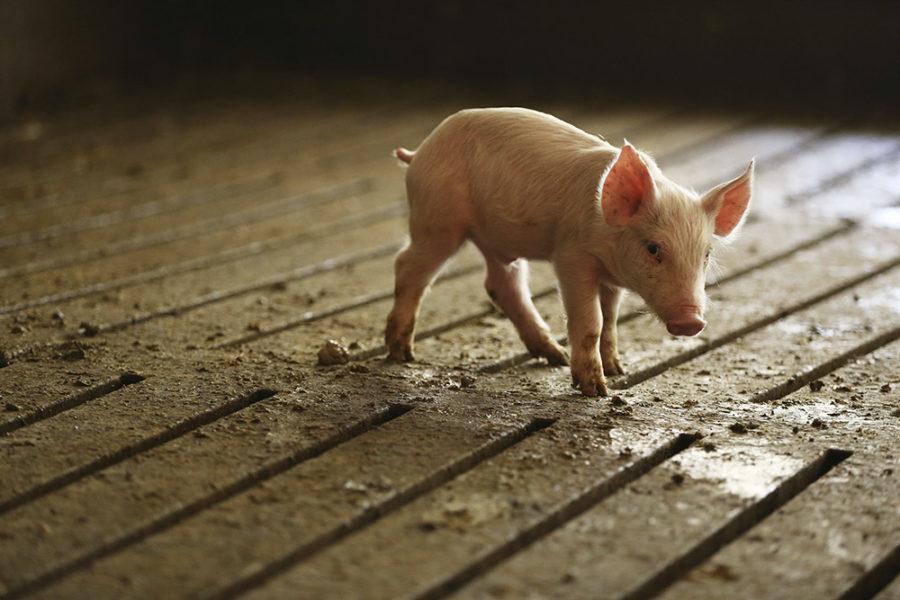 A young pig in a hog confinement operation walks across a slotted floor. The movement of pigs across their pen pushes their waste through the slots into a storage pit below. (Stacey Wescott/Chicago Tribune/TNS)

SIU farms have been granted new permissions to have pigs following an investigation where the protocols for the program were suspended.

Permission to host pigs again was granted on Oct. 18 and the six new pigs were received on Oct. 23.

The Institutional Animal Care and Use Committee received an anonymous complaint about animal welfare in the Swine facility at SIU in February of 2019. IACUC voted unanimously to suspend all protocols involving swine and began to investigate the farm, according to the corrective action plan issued by the committee.

In February, the pipes in the swine facility froze leading to severe dehydration of the piglets on the farm, former dean of the College of Agricultural Sciences, Karen Midden, said in an interview with the Daily Egyptian in April.

Midden said as a result of the frozen pipes, the affected piglets were euthanized and all of the remaining pigs were sold. According to the swine center’s website, it had nearly 100 sows.

Scott Ishman, Interim Dean of the College of Science and Acting Dean for the College of Agriculture, said the college made a number of improvements in order to resume operating protocols.

“Up to this time, we’ve spent nearly $50,000, and that’s in the period since I’ve been in this position,” Ishman said. “It’s been spent on making improvements there. Not all of those items that were listed in the reports have been addressed yet, but the most serious ones have been like the watering and those pieces of it.”

Ishman said the improvements were made so animal science classes could continue being taught in the farm and no classes were cancelled this semester due to the suspension of protocols.

“We are making good progress on taking the corrective actions but particularly focusing on those actions that impact animal welfare,” Ishman said.

At the time of the IACUC investigation, Karen Midden was the dean of the college of agricultural sciences. On June 25, she announced her retirement.

In an email obtained by a Freedom of Information Act request by the Daily Egyptian, Midden said she did not expect to retire so soon and was doing so because the chancellor decided not to renew her contract with the university.

“The understanding I have for that decision is based on the discontentment of individual faculty, related alumni and a few others,” Midden said in the email. “Otherwise, I would not leave without more planning and notice. That said, I am thrilled to be retiring and have no regrets regarding  my career and journey at SIU since 1985.”

According to IACUC’s corrective action plan, the farms had already been flagged by IACUC for non-compliance in January 2018 at the Beef and Swine centers.

The farm did not comply with all of the elements outlined in IACUC’s first corrective plan issued in 2018 and had been out of compliance with USDA regulations for more than a year.

“Some conditions on the farm have continued to deteriorate with deleterious effects on animal welfare,” the second plan said.

The plan said facilities and staffing are not up to standard to provide appropriate husbandry to the animals and documentation of husbandry is “essentially non-existent.” It mentioned training for staff and student workers is also non-existent.

The report was especially concerned with the farms facilities.

IACUC said the farm needed to repair all of the waterers and ensure they are all insulated and automatic, all structure housing animals must be reviewed and repaired and a plan for bio security needs to be implemented.

Another key element of the corrective plan said SIU needs to implement more staff training and oversight of the farm.

This involved ensuring there was enough staff on the farms, training all personnel, creating emergency response plans and improving documentation of farm activities.

The farm was given deadlines for corrective action and was told to make the necessary changes by April 15, April 30 and May 31 depending on the task.

On June 25, the same day Midden announced her retirement, IACUC sent her an email that SIU did not meet their deadlines to fix the farms and the swine protocols would remain suspended.

In addition to the improvements to the swine facility and the search for a new dean, the farms have made three personnel changes.

Greg Osman will no longer be serving as the farms director, Colton Collier will no longer act as the Beef Center Manager and Michelle Sullivan has left her role as the farms accountant, according to a release from the college of agricultural sciences.

“For the short-term, two extra help positions have been approved by university administration,” the release said. “The administration is currently in the hiring process for these positions and hopes to fill them within 1-2 weeks. Long-term, administration will be hiring a new farms director, beef center manager and accountant.”

Ishman said the farms have a bright future.

“I think any new administration coming in probably will invest in the farms because ag is big in the state of Illinois,” Ishman said. “It really benefits us greatly to have a college of agriculture or to have the farms here on campus and to be able to provide our students opportunities to have a working farm to gain those experiences that are really necessary when they go out and leave SIU.”