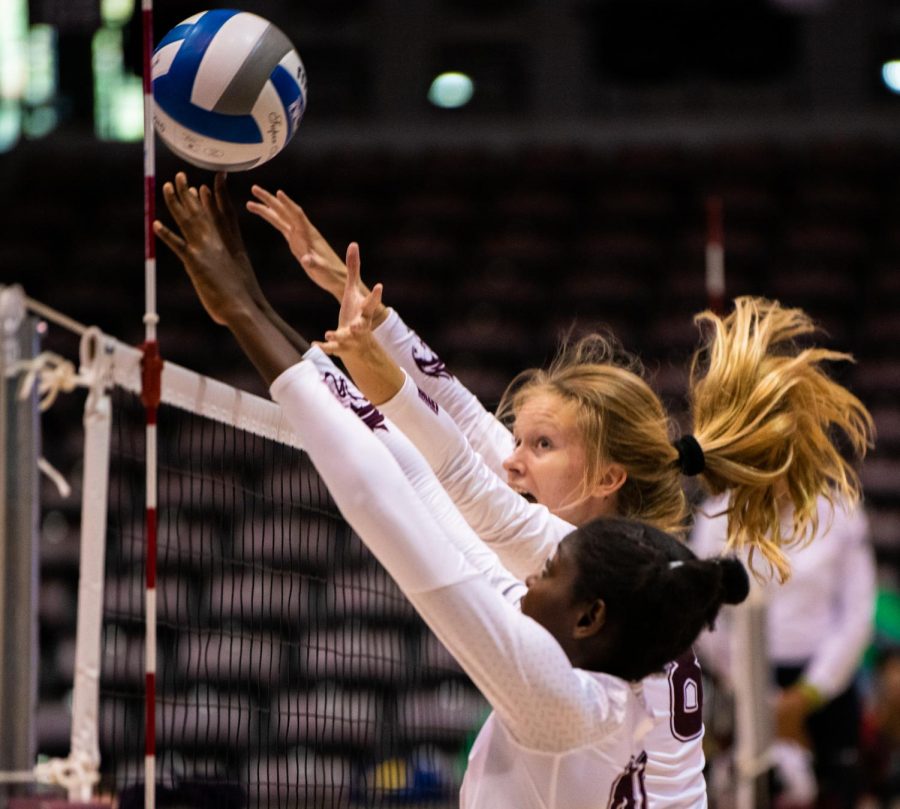 Salukis Hannah Becker and Savannah Sheridan attempt to block the ball on Saturday, Sept. 7, 2019 during the Salukis’ 3-1 win against the Southeastern Louisiana University Lions at the Banterra Center.

Last time the Salukis saw the Bradley University Braves on Sept. 27, it took them five sets and over three hours of play to find a win.

Bradley outlasted Southern through many long rallies with a strong defensive effort.

The Salukis (12-13, 4-7 MVC) headed into tonight’s match off of a two-game winning streak. They took down the Illinois State University Redbirds 3-1 on Oct. 25, and prior to that they beat the Missouri State University Bears 3-2 on Oct. 19.

Bradley (10-11, 6-4 MVC) broke a two-game skid with tonight’s win. Last night, they fell to the Missouri State in five sets, and on Oct. 19, dropped a 3-0 match to the Loyola University Chicago Ramblers.

The Salukis had one hitter with double-digit kills with junior opposite Hannah Becker recording 15 while hitting on a .412 clip.

It was evident at the beginning of the first set that it would be hard fought as both teams brought intensity on both sides of the net.

Throughout the set, neither team gained more than a three-point lead.

Southern Illinois took their first lead of the set after a four-point advantage put them up 11-9.

A series of errors by the Salukis, however, allowed Bradley to take the 19-17 advantage.

Late in the set, SIU held the 23-22 lead, but the Braves’ three-point run wouldn’t allow the Salukis another chance to score.

For Southern, Becker found seven of her kills for the night just within the first set, while Bradley’s sophomore outside hitter Hannah Thompson led the Braves with four kills.

The Salukis took the early 7-2 lead in the second set, with two kills in a row from junior outside hitter Savannah Sheridan forcing Bradley to call a timeout.

SIU pushed ahead with three big plays from senior middle blocker Emma Baalman — two kills in a row followed by a solo block — to take the 16-12 advantage.

The Braves took their first lead of the set at 21-20 after a three-point run, and from there kept the momentum to finish the set.

Bradley carried their energy into the third set, taking a 13-8 advantage. Thompson and sophomore outside hitter Rachel Pranger both chipped in two kills apiece to help the Braves edge ahead.

The Braves wouldn’t let go of their lead throughout the set, leading by as many as seven.

Southern finished the set with 11 kills total, while Bradley recorded 15 team kills, Pranger with five of those as her own.

For their next matchup, the Salukis will travel to Cedar Falls, Iowa, for their second opportunity against the University of Northern Iowa Panthers (15-9, 9-1 MVC).

First serve is set for 6 p.m. with broadcast available on ESPN3.