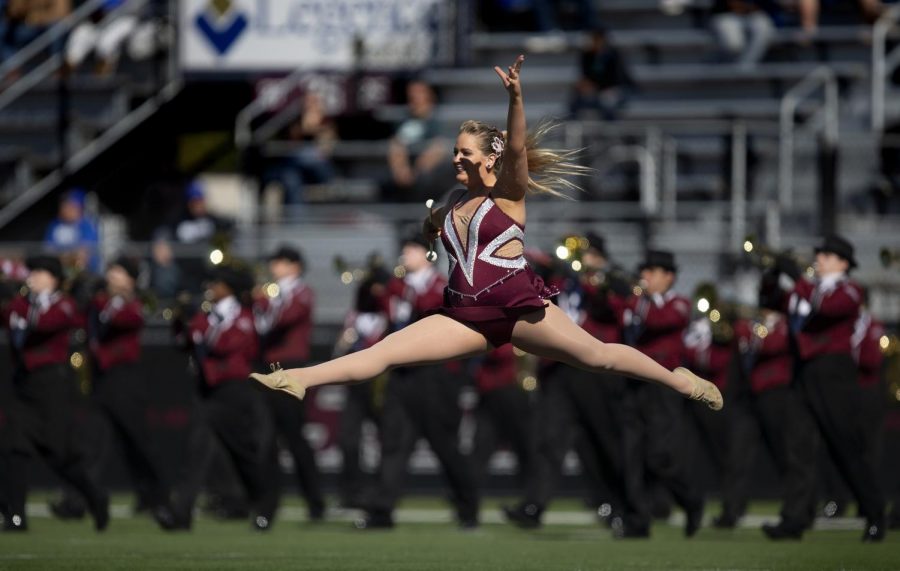 When attending a football game, the main events consist of the game and halftime. Halftime is filled with performances from spirit teams and the band.

Southern’s marching band includes the band itself, the Dazzlers, color guard and a feature twirler.

Senior Jazmin Randazzo has stayed planted in her role as feature twirler since her freshman year at SIU. She performs with the Marching Salukis at football games, as well as parades and pep rallies.

During Randazzo’s freshman year, she was accompanied by Juliette Makara. Since then, Randazzo has been twirling solo for the past three years.

A twirler is more than a girl who throws a stick, Randazzo said.

“A twirler is basically just somebody who is there to entertain the crowd and give them a little feel of the talent she has,” Randazzo said.

The crowd sees them, there’s nowhere to hide, George Brozak, director of the band, said.

“They are being looked at, and being watched for their skill on the field,” Brozak said.

Randazzo has been twirling for 15 years, Randazzo said. She said she first started twirling when she was seven years old when her grandmother sparked a conversation with a twirling instructor while they were in Kmart. So, she went and joined the twirling team and has been twirling ever since.

“Everything that goes into your hand it’s just a go-to, like you have to do it. Your brain tells your body what to do,” Randazzo said. “My brain is stuck on twirling.”

Jo Ann Britton, a former coach of Randazzo’s, said she was a very determined young lady, so she worked really hard.

“If I gave her a challenging trick, she was going to get it,” Britton said.

Randazzo advanced all the way to the highest level in baton twirling, and has won state events, Britton said.

Twirling is not a very well-known sport any more, said Randazzo. She said this makes the college level that much more difficult.

A twirling career consists of being able to compete at a college level, not everyone gets that opportunity, Britton said.

People tend to look at twirling as not a real sport, which is very offensive to an extent because we do practice a lot, Randazzo said.

“It consists of hand-eye coordination, the flexibility and the counts,” Randazzo said. “Everything put together is a job, it’s work.”

Earlier in her twirling career, Randazzo said she participated in competitions where she was judged on a solo routine, an extract showcasing flexibility and the ability to march with music. A rhythmic twirl, modeling with an interview and a team routine are also a part of competitions, she said.

Randazzo’s favorite part about twirling now is that she gets to twirl for the school she attends and is able to perform with the marching band, she said.

“It’s the best feeling because we’re all like a big family,” Randazzo said. “We get along very well. We all like doing one thing, and that’s putting on a show for halftime.”

Randazzo practices with the band four times a week and tries to practice on her own time at least three times a week, she said.

Randazzo choreographs her own routines, something she has been doing since middle school talent shows, she said.

“She creates the routine, she’s basically starting from scratch,” Brozak said. “She is never doing the same thing twice.”

The band brings something new for halftime, so she does the same, Randazzo said. She said it was something very new to her when she started out.

“That was very different to me because each performance that we do I’m going to have to make up a new routine, so people don’t look at me like ‘oh, I remember those tricks,’” Randazzo said.

Brozak said he gives his feature twirlers free range to what they want to do on the field.

Randazzo said she hopes to be performing again at basketball halftimes this year; however, she will be performing solo to her own music.

Staff reporter Ashlyn Ege can be reached at [email protected].