In the war room with Warfel: The line between facts and opinions 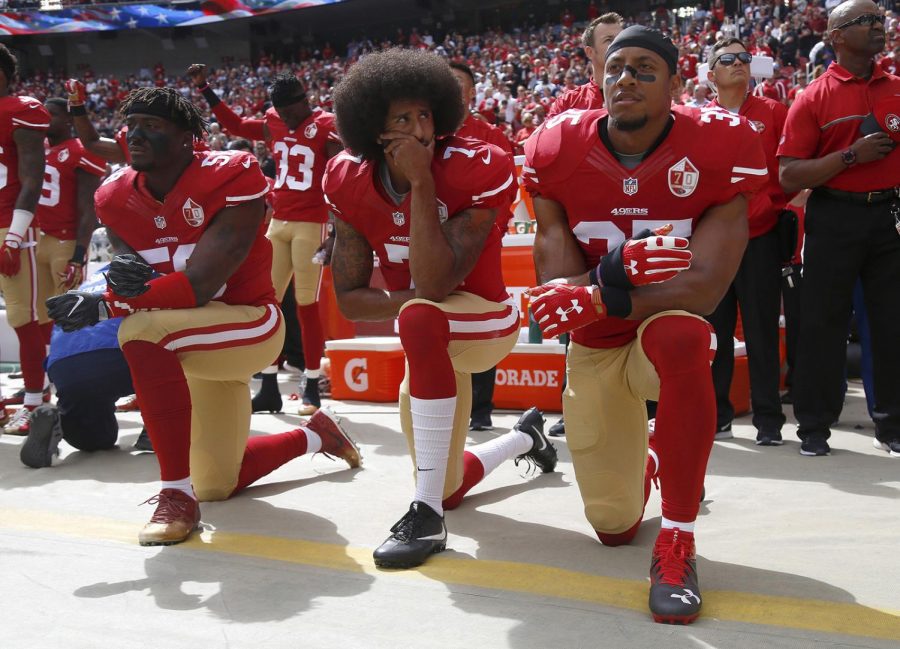 From left, The San Francisco 49's Eli Harold (58), Colin Kaepernick (7) and Eric Reid (35) kneel during the national anthem before their a game against the Dallas Cowboys on October 2, 2016, at Levi's Stadium in Santa Clara, Calif. Photo courtesy of Nhat V. Meyer/Bay Area News Group/TNS.

Politics in sports have become commonplace. You can turn on the television and see Lebron James talking about his opinion about President Donald Trump.

I’m sure you can look back to the Colin Kaepernick situation where he was kneeling during the National Anthem, and everyone had an opinion on that.

As an American soldier myself, I defend the rights of men like James and Kaepernick to be able to voice their opinion on politics in the United States.

Do I necessarily agree with every athlete’s political viewpoint, especially if they’re vocal about it?

No, but I honor the fact that we, in America, are able to voice our opinions. We are able to speak out, and that’s one of the reasons that makes the United States a good country.

Too many times, I hear debates where people choose to drag each other down, rather than respect each other’s opinion.

If I have one viewpoint on a polarizing political issue and my friend is on the opposite side, I am not going to disown them simply because they think differently than I do.

Inclusivity is way more important to society than excluding your life to only those who have the same viewpoint as you do.

Looking back on the Kaepernick situation, did I personally agree to him kneeling during the National Anthem? No.

However, I understand now what he was shedding a light on. Just by kneeling, Kaepernick was able to spread awareness of the Black Lives Matter movement nationally.

Every voice matters, every life matters and every opinion matters. If my opinion is different from yours, feel free to pull me aside have a civil conversation with me.

I think it is imperative that we, as a culture, learn how to listen to new ideas and thoughts, even if they might go against individual’s guiding principles.

Freedom of speech is not about condemning those who think differently than you; it’s listening to every person no matter what they have to say.

Houston Rockets general manager Daryl Morey caught a lot of heat when he sent a tweet out in support of the Hong Kong protesters.

The NBA took a big hit in China because of Morey’s tweet, which has since been deleted.

The typically outspoken James said Morey was not educated on the situation in Hong Kong, in a press conference on Oct. 14.

“I don’t want to get into a [verbal] feud with Daryl Morey, but I believe he wasn’t educated on the situation at hand, and he spoke,” James said. “So many people could have been harmed not only financially, but physically, emotionally and spiritually. So, just be careful what we tweet, say and we do. Even though, yes, we do have freedom of speech, there can be a lot of negative that comes with that, too.”

James has been known in the past to openly discuss his disdain with Trump. Yet, when it came time for him to speak out on what he thought about the situation ongoing in Hong Kong, he shrank away.

When money enters the picture, I’m sure many people would be more inclined to hold back their own opinions.

Now, put yourself in James’ shoes. If you were looking to lose money off one comment you could say, would you be willing to be outspoken?

In the end, it was all Morey’s right to send a tweet supporting the movement in Hong Kong. It was his opinion, so it is okay.

We tend to blur the line between fact and opinion, sometimes. Simply put, an opinion is what you believe.

We as a culture, and as a society must be willing to honor each other’s opinions and look towards a better future.

Sports Editor Adam Warfel can be reached at [email protected] or on Twitter at @warfel_adam.