A struggle on the road: SIU drops match to Valpo

The Salukis lost to Valparaiso University Crusaders on Saturday night. 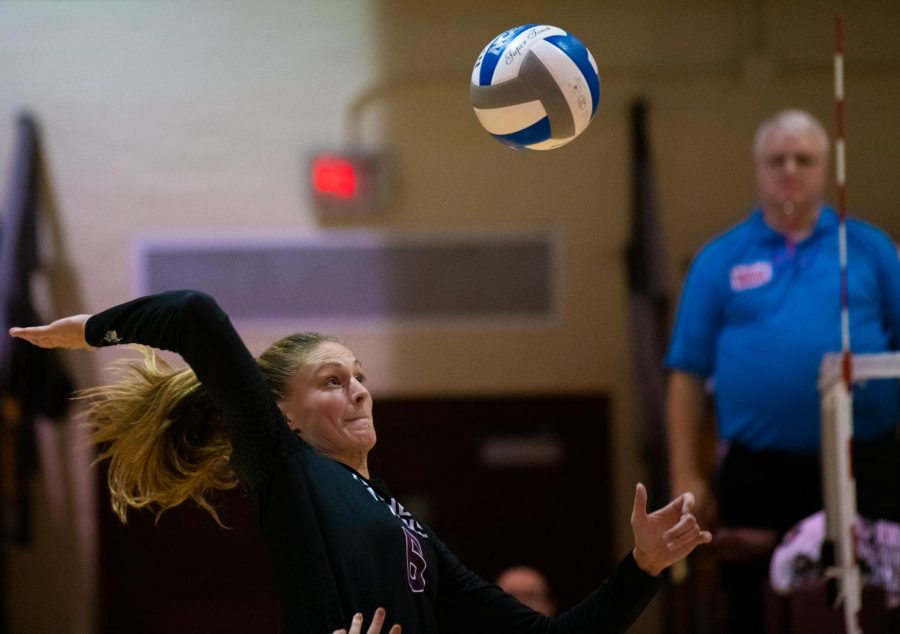 Saluki Emma Baalman spikes the ball on Saturday, Oct. 5, 2019 during the Salukis' 0-3 loss against the University of Northern Iowa Panthers inside Davies Gym.

In a 3-0 sweep, the Southern Illinois University Salukis dropped a match to the Valparaiso University Crusaders on Saturday night, falling to 2-4 in Missouri Valley Conference play.

The Crusaders were able to take advantage of large scoring runs to put the Salukis away, 25-17 in the first set and 25-19 in sets two and three.

Valparaiso (8-12, 3-3) took on the Salukis coming off of a two-game winning streak, having swept both the Missouri State University Bears last night as well as the Indiana State University Sycamores on Oct. 5.

The Salukis battled back and forth with the Crusaders in the beginning of the first set, but it was Valparaiso that broke away from a 15-15 tie to win the set by eight points.

Senior setter Alayna Martin put down two kills early in the set to keep Southern Illinois in the match with Valparaiso, while Crusader sophomore middle blocker Haley Hart had two kills early on in the set as well out of her five total.

Valpo’s junior middle hitter Peyton McCarthy had two aces in the set, both of which came during the team’s push away from SIU.

The Salukis continued to work on offense throughout the set, junior middle blocker Lindsey Paulsen putting down two kills and junior outside hitter Savannah Sheridan recording two kills as well.

The Salukis found momentum in the second set, breaking away from an eight-all tie to extend to an 18-11 lead, but would only find one more point as the Crusaders took control of the game.

SIU found strength offensively towards the beginning of the set, both Paulsen and junior setter and outside hitter Rachel Maguire putting down four kills each.

The Crusaders remained aggressive at the net, however, with McCarthy recording one solo block and two block assists to help the team take the lead.

Early in the third set, SIU and Valpo exchanged the lead; the Salukis up 5-4 early on, but eventually the Crusaders edged ahead, leading 11-10.

It was another large run from Valpo, however, that gave them the 18-11 lead, with Southern Illinois committing several errors as the Crusaders advanced forward.

Junior outside hitter Kyra Hunter gave the Salukis a spark with two consecutive kills, helping SIU to only a 19-15 deficit, but their efforts wouldn’t prove to be enough to outlast the Crusaders.

McCarthy led Valpo with 12 kills total for the match, hitting at a .632 clip, while Hart chipped in 11 while hitting at a .429 percentage.

Paulsen led the Saluki offense with her seven kills of the match to go along with one block.

Sophomore defender Kat Wagner tallied 15 digs for the match, while freshman defender Abi Fitzpatrick chipped in 10 to help out the Saluki back row.

Martin’s assists for the set allowed her to reach a career achievement of 2,000 assists, becoming one of 12 athletes total to have played at SIU and reach the mark.

SIU will take the week to prepare for next weekend’s home games. The Salukis will face the University of Evansville Purple Aces on Friday, Oct. 18, at 6 p.m in Davies Gym.