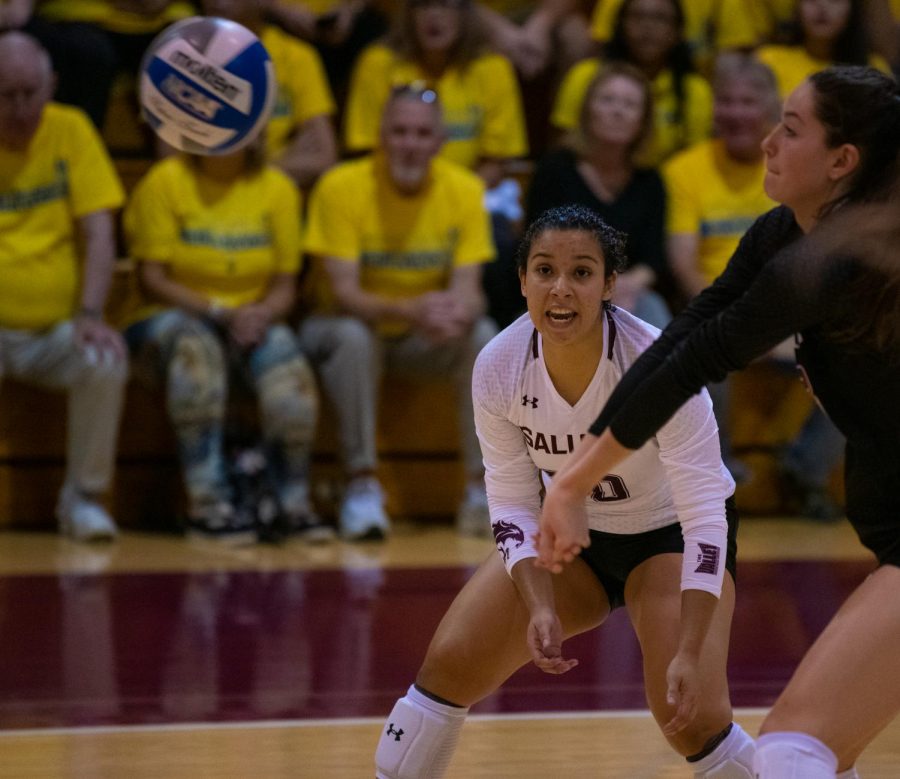 Saluki Laura Rojas watches as Rachel Maguire hits the ball on Saturday, Oct. 5, 2019 during the Salukis' 0-3 loss against the University of Northern Iowa Panthers inside Davies Gym.

On Friday, the Southern Illinois University women’s volleyball team dropped a four-set match to the Loyola University Chicago Ramblers on the road.

The Salukis (10-9, 2-3 MVC) (11-8, 3-2 MVC) most previously played at home last weekend, defeating the Drake University Bulldogs on Friday, Oct. 3, but were swept by the University of Northern Iowa Panthers on Saturday.

Loyola (12-6) is so far undefeated in Missouri Valley Conference play, with tonight’s win marking their fifth. Their previous matchup was against the University of Evansville Purple Aces, from which they walked away with a 3-0 victory.

Junior outside hitters Savannah Sheridan and Hannah Becker combined for a total of 28 kills for the Salukis, leading their offensive efforts against the Ramblers. Sheridan, a Chicago native, lead with 15, while Becker had 13.

Southern Illinois held a brief 5-3 lead over Loyola in the first set, but would soon be swept by a 7-0 run by the Ramblers that would allow them to maintain the lead for the rest of the set.

The Salukis fought their way back to a one-point deficit with the Ramblers up only 11-10, but two blocks from senior middle blocker Heather Kocken and freshman middle hitter Taylor Venuto pushed Loyola further past Southern Illinois.

For the Ramblers, freshman outside hitter Sarah Murczek put down six kills to lead Loyola offensively and help them take the first set win.

The Salukis continued to fight in the first set, however, with Sheridan putting down five kills, but couldn’t find a way past Loyola.

SIU took control of the match in the second set; two kills early on from junior setter and outside hitter Rachel Maguire gave SIU the early 7-3 lead.

Loyola’s freshman outside hitter Addie Barnes worked to keep the Ramblers in the game with two kills of her own, bringing them to a four-point split with Southern up 11-7.

To tie the game at 16-16, the Ramblers made a 7-3 run, with junior middle blocker Elle Van Grinsven finding three kills.

Both teams battled back-and-forth from here, tying the score again at 20-20 and 22-22, but SIU wouldn’t allow Loyola a chance to take the lead.

The Ramblers regained their momentum in the second set, taking as much as a 20-12 advantage over Southern Illinois.

While the Salukis would make an 8-5 scoring run in the final points of the set, Loyola’s early advantage allowed them to secure the win.

Both Kocken and senior outside hitter Quinn Spieker had five kills apiece during the set, while SIU’s Becker had seven.

In the fourth set, Loyola lead by as much as 12 from early on; the Salukis found themselves down 16-4 before they were able to regain their balance.

Southern then made a 6-1 scoring run, however, with the Ramblers committing multiple attack errors in the process.

At their closest, SIU was within three points of Loyola while down 19-16, having made another six-point scoring run, but it wasn’t enough to make it past the Ramblers.

For SIU, senior setter Alayna Martin lead in assists with 20 to go along with eight digs, while Maguire chipped 18 assists as well.

On defense, freshman defender Abi Fitzpatrick lead Southern in digs with a total of 19, while senior defensive specialist Laura Rojas helped out with 15.

Loyola was led on offense by Kocken, who totalled 15 kills, while Barnes finished with a kills-digs double-double, with 11 kills and 13 digs.

For their next match, the Salukis will travel to Valparaiso, In., to take on the Valparaiso University Crusaders tomorrow night. First serve is set for 5 p.m.