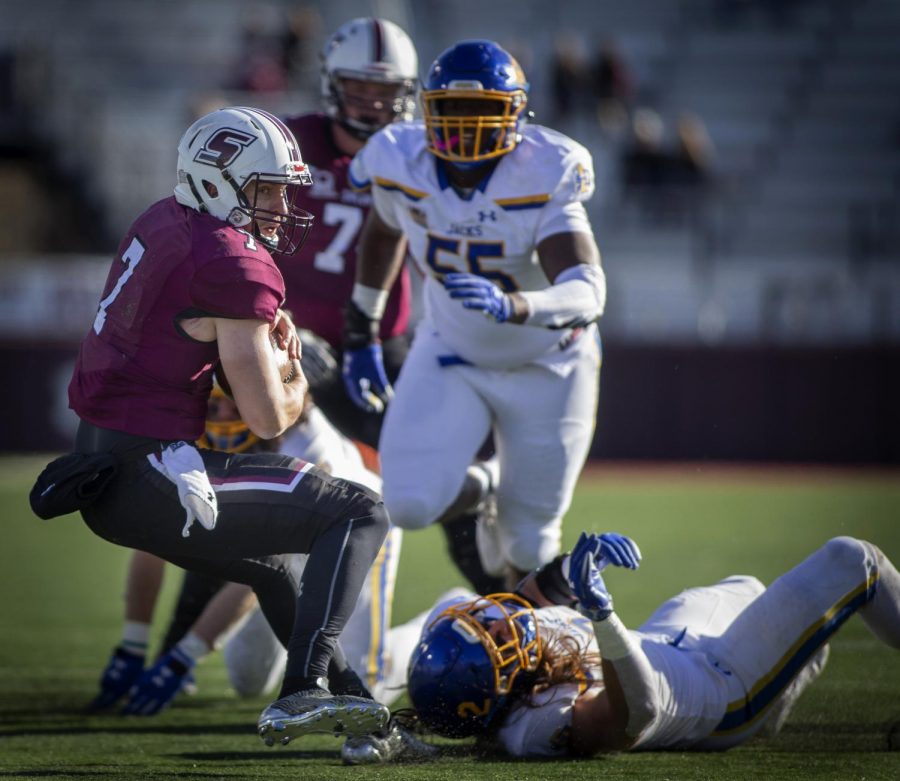 This Saturday the SIU Football Program will play in its ninth annual Blackout Cancer game.

The Blackout Cancer game allows Saluki fans to bid online for current SIU player jerseys at the beginning of September.

After bidding has ended, bidders are permitted to choose a player jersey starting from the highest bidder to the lowest.

The top 99 bidders will take home a black jersey that has the name of a family member who suffered from cancer on the back after the game.

The jerseys are worn during the game by Saluki Football players and given to each bidder after the game.

The winning bidders will also have the chance to go out onto the field during halftime to be recognized by the entire stadium.

Blackout Cancer was started by SIU Football alum Mike McElroy to help bring awareness and support to finding a cure for cancer while helping raise money to provide funds for cancer patients in the southern Illinois area.

SIU reached out to non-profit organization, Southern Illinois Healthcare in 2012 to start a partnership for the game and the partnership remains current.

All proceeds from the jersey bidding are given to the Coach Kill Fund, which is named after Southern’s former football coach and athletic director, Jerry Kill.

“When the partnership first started, the proceeds were going to the SIH cancer center,” said SIH special events coordinator Paula Frisch. “Now the money raised is designated for the Coach Kill Fund.”

During his coaching career at SIU, Kill developed stage four kidney cancer, which is now in remission.

While Kill is no longer employed by the university or residing in Southern Illinois, he decided to keep his fund in the area to help the patients in the southern 16 counties of Illinois.

“I started a cancer fund when I was coaching at SIU,” said Kill. “I had stage four kidney cancer when I was here and so we decided to keep the fund here.”

So far, the fund has helped over 1,500 patients spending $589,000 and is predicted to help even more in the upcoming years.

“In the past we have raised from $30,000 to $51,000 with the jersey bidding,” Frisch said. “It normally depends on who is bidding on the jersey and their reason behind it.”

After looking at the bidding leaderboard earlier this month, the game is predicted to raise at least $25,000 this year.

The game raises cancer awareness and money, but for the bidders and their families the names on the back of the jerseys are what is most important.

Frisch shared that her favorite part about helping with the Blackout Cancer game is hearing the story behind bidder jersey purchases.

“I think the best thing about the game is hearing the stories about why people are bidding on these jerseys,” Frisch said. “We have so many jersey stories posted on our website and that is really why we are doing this. Yes, we are raising money for the fund, but we are also honoring those who have had cancer or whose loved ones had cancer. The stories are what touch my heart.”

The game has more meaning for one Saluki head coach than it might for others.

Both Blaylock’s father and brother suffered and later passed away from cancer and the coach spoke about the treatment process and the impact the Coach Kill Fund had on her own family.

Both suffered from Von Hippel-Lindau disease which is a hereditary illness that causes tumors to arise in multiple organs such as the brain, spinal cord, and eye.

“I lost my dad and brother to a very rare disease called Von Hippel-Lindau,” Blaylock said. “They both died of kidney cancer, but they both had multiple brain tumors. We were shocked because they were diagnosed only a week apart, my brother at 21 and my dad at 43. We took many trips to the hospitals in Saint Louis and there were major surgeries about every six months.”

Blaylock said that when her father and brother were diagnosed, she and her mother were the only sources of income for the family which caused them to turn to the Coach Kill Fund.

“The Coach Kill Cancer Fund helped my mom and family when they would have to go to Saint Louis to spend extended periods of time up there,” Blaylock said. “It has been such a great thing for my family to be able to utilize that fund and I am a big believer in this event because there are so many families in Southern Illinois that don’t have the resources to pay for things in those moments.”

Blaylock expressed her support for the event and the Coach Kill Fund. She also shared that she purchased a jersey in honor of her father and brother in the past games.

“People going through a situation like they shouldn’t have to stress about money because they are already stressing about health,” Blaylock said. “Having something like the Coach Kill Fund and being able to request even just a little bit of money helps. I am very passionate about cancer research and games because of how it has affected my own family.”

You can attend the Blackout Cancer Game on Saturday at the Saluki Stadium to watch Southern take on the Illinois State Redbirds. Kick off is set for 6 p.m.