A depth of experience: Pacheco helps SIU volleyball as a GA 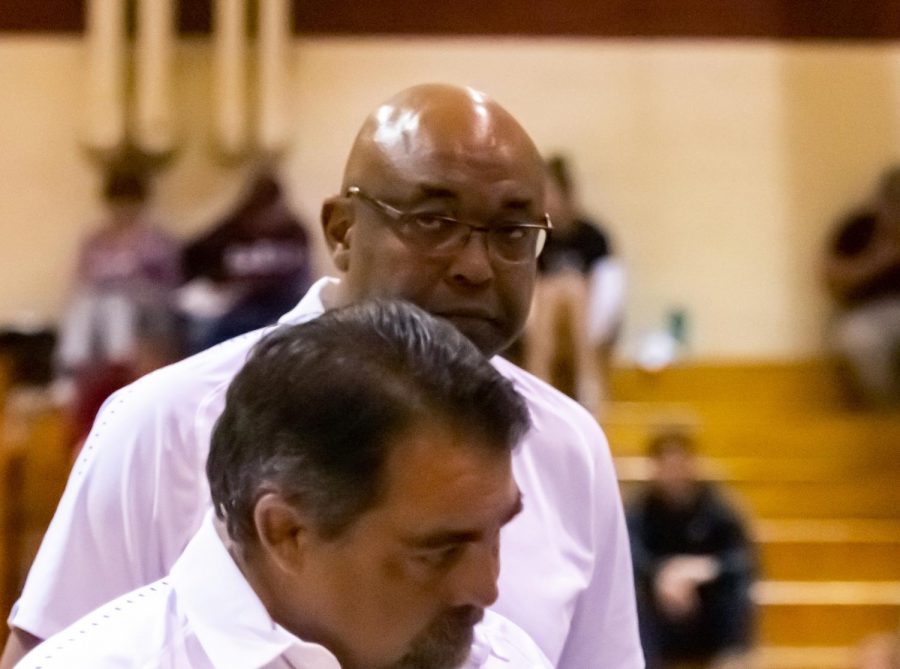 While each member of the staff offers great depth of volleyball knowledge and experience, Pacheco brings a unique combination of both playing and coaching experience, including at the national level, to help SIU this season.

It was after his time spent coaching the women’s national team that Pacheco came to the United States, he said.

Pacheco’s educational career began at Jefferson College, a junior college in Hillsboro, Missouri, where he began his undergraduate studies in psychology.

From there, he transferred to University of Tulsa to complete the degree, as well as begin working with SIU’s current head coach Ed Allen, who, at the time, was the head coach at Tulsa.

“He was a [student] manager for me at Tulsa,” Allen said. “He was unbelievable. He was able to help us in practice, able to hit balls, [and he had] an opportunity to really blend with our coaching staff well.”

With both the Crimson Tide and the Rebels being members of the Southeastern Conference, the two had the opportunity to meet again on opposite sides of the net.

Allen said he enjoyed the opportunity to play against a team and against a coaching staff that he respects.

“It’s always nice to play against people that you do have respect for and that you care about, and it makes winning and losing more tolerable,” Allen said.

Allen and Pacheco both joined Saluki athletics this season; Allen at the head coaching position, while Pacheco took on the role of a graduate assistant, as he continues to complete his master’s degree.

“I am working on my master’s degree in kinesiology,” Pacheco said. “[As far as coming to SIU,] it was an opportunity to be with coach Allen again. I want to give a different direction in my life so having the opportunity to work with him again, talk to him and see which direction I’m going, I think is the best choice that I could make.”

Allen said while Pacheco is only a GA, and therefore doesn’t have full coaching abilities, he is still a large asset to the team as a consultant for the coaching staff.

“We brought him here, and he can’t coach here because his job is in a graduate assistant role. So, he’s another set of eyes that I just get a chance to ask, ‘Hey, what are you seeing? What do you think about this or that?’” Allen said.

Senior setter Alayna Martin, who has played with the team since her freshman year, said Pacheco’s perspective adds to the coaching staff’s success.

“I think he’s been a huge asset to our team,” Martin said. “He’s very knowledgeable in volleyball and just adds a different perspective that maybe the other coaches don’t see. All their thoughts coming together is really beneficial for us.”

In addition to bringing experience and perspective to the Salukis, Pacheco also assists with drills in practice, particularly in introducing a ball into play or making the first contact on the ball to get a drill started.

“He has the ability to initiate a first ball for us in a very controlled way that players don’t have the experience to be able to do,” Allen said.

Martin said in addition to helping the coaches with games and practice, Pacheco has helped the team learn to maximize their efforts on the court and how they make a play on the ball.

“One thing that he’s really big on is effort and going through the ball and he’s helped us with our technique of doing that,” Martin said. “We’re able to do that in a more efficient way, getting on the floor and getting up as fast as possible.”

Pacheco said while he is still adjusting to being both a new student and a new volleyball staff member at the university, he admires the team’s attitude and work ethic, as well as the support from the fans.

“What I really like here is the team: how they come to practice today, how supportive they are and how open they are for everything new that coach Allen brings. This is amazing because it’s not common,” Pacheco said. “It’s a group that has adversity […] and they are hungry to do something better. This is what stands out to me.”

Pacheco said he sees growth in the team so far this season, but as they move forward, he takes things week by week.

“I see the team progressing. I think it’s already a successful season. I think that is improvement,” Pacheco said. “But, let’s see what the situation is for each week.”

As the Salukis push forward through their Missouri Valley Conference play of the season, Pacheco and the coaching staff as a whole will continue to use their depth of experience to prepare the team for each opponent.